High School is a scary time for many people. There are SATs, ACTs, college essays and applications, and finishing the semesters strongly. Many students often get wrapped up in their scores and grades and completely forget to think about what they want to do as a career. For others, however, they have a clear vision […]

High School is a scary time for many people. There are SATs, ACTs, college essays and applications, and finishing the semesters strongly. Many students often get wrapped up in their scores and grades and completely forget to think about what they want to do as a career. For others, however, they have a clear vision of their dreams and are already taking steps to get where they want to be.

Christian Brothers student Chloe Decker (‘21) found her passion at a very young age. It was on the fifth grade track team that she realized that running is what she wanted to do in life.

“The power of training to improve my skills and times, the excitement of competing and deep love for this sport drives me each day,” she says.

Chloe works very hard everyday to get where she is, training five to six days a week, two to three hours a day. She loves the sport so much that she changes how she eats, spends her free time, and even her school activities, but she does say that “for track, nothing is too big a sacrifice”.

Chloe’s ultimate goal is to run competitively beyond college.

“To run as an elite athlete would mean that my sacrifices, dedication and hard work have paid off,” the junior says.

Reagan Geach (‘20), found his passion in the musical theatre world. He too started in fifth grade, but he didn’t know it’s what he wanted to pursue until high school. Reagan puts a lot of time and effort to get where he is and where he wants to be.

“I’m constantly in productions, memorizing lines, and fine tuning all the other aspects of my performance.”

“You know what you’re going to watch when you go to a football game, but when you go to see a show, you never know how the performance will leave you.”

For others aspiring to be in musical theatre, Reagan says it takes a lot of hard work, but performing for an audience is rewarding.

“Theatre takes a lot of work,” the senior says. “Knowing your body and where to place your singing, where to put your body weight when dancing, and where your focus needs to go in a scene — but it’s always worth it, and I think it pays off more than any other career.”

Most high schoolers haven’t found something they’re passionate enough about to put in time, dedication, and effort without it feeling like a job. Luckily for Chloe and Reagan, they have found their future. Although their paths are different, they’re both ready to get in the real world and start the next chapter of their careers. 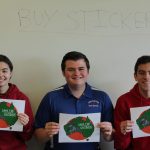 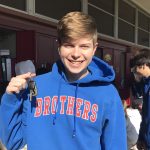