(illustration by Joaquin Romero) It’s 2:50 and the bell just rang. In addition to thinking about upcoming tests and assignments, hungry CB students ponder where they are going to get their grub on. The Talon spoke with a few students who shared how they satisfy their hunger after a long day at school. Etta Lauchland […] 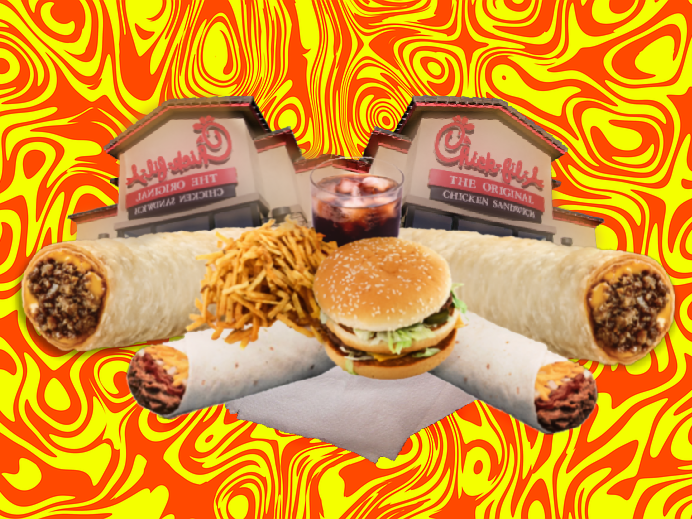 It’s 2:50 and the bell just rang. In addition to thinking about upcoming tests and assignments, hungry CB students ponder where they are going to get their grub on. The Talon spoke with a few students who shared how they satisfy their hunger after a long day at school.

Etta Lauchland (’20) clued us in  her thought process when deciding where to eat after school. She said, “ I usually try to think of somewhere that’s on my way home”. Her tried and true after school spots are Nugget Market and Chik-Fil-A because of their close proximity to her house. “ Chik-Fil-A is just one exit before my usual turn so it is not too far, and Nugget is just down the street from my house so it’s very convenient”.

Olivia Morton (’21) explained the laid-back vibe at her favorite after school spot, The Coconut on T. “The atmosphere is very relaxed and welcoming and the restaurant is really cheap, so it’s prefect for someone who’s trying to eat well but not trying to spend too much [money]”. The sophomore said her favorite thing to order at The Coconut on T is the fresh rolls and urges CB students to give them a try!

Rafa Fernandez  (‘20) said his first priority when choosing an after school meal is convenience, “ The first thing I think of when choosing a restaurant would be how close it is to my path of travel”. Rafa added that he also keeps cost in consideration, “ I don’t want to be spending too much because money because I am spending my own money”.

Rafa typically eats at Oscar’s Very Mexican Food, an authentic Mexican restaurant located on Freeport Boulevard. With it’s close proximity to CB, Oscar’s is a popular hub for students looking to grab a quick bite on their way home from school.

Despite its unusual location and bland façade, the food and aura found at Oscar’s speaks for itself.

“It looks like a little shack on the corner of two almost run down streets, but inside it’s really colorful and happy,” Rafa described. Rafa included that the staff at Oscar’s is more than welcoming and happy to strike up a conversation with all who come inside.

Among other talents, CB students definitely know how to scope out the best restaurants for after school dining, and there is no better way to bond with your friends and peers than to sit around and feast on some good cuisine. So next time you are looking for a place to grab a bite,  gather your friends and check out some of these student recommended hot spots.