There are few seniors who live as interesting a life as Poppy Ruyak (’19). Poppy is a busy girl, participating in a touch of everything. She is involved in KBFT, Sports Broadcasting, Dive,  Falcon Force, and is a student ambassador at CB. Outside of CB, she also lives a crazy life, from shredding the gnar […] 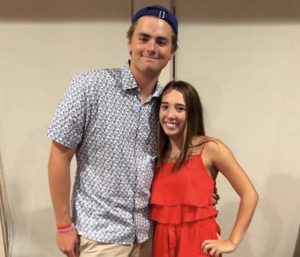 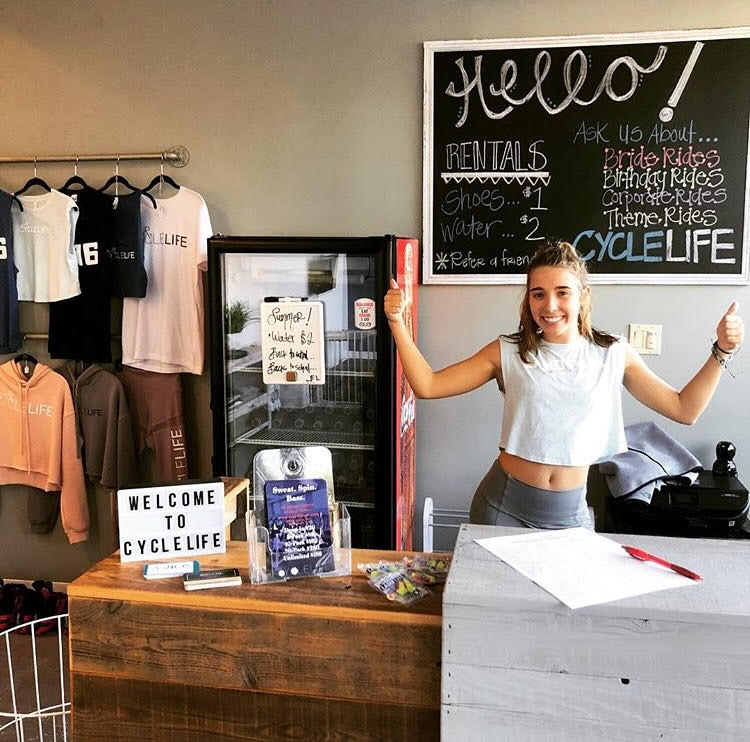 There are few seniors who live as interesting a life as Poppy Ruyak (’19). Poppy is a busy girl, participating in a touch of everything. She is involved in KBFT, Sports Broadcasting, Dive,  Falcon Force, and is a student ambassador at CB. Outside of CB, she also lives a crazy life, from shredding the gnar up at Heavenly to training to be a spin class instructor at Cycle Life in Land Park.
During the summer, Poppy coaches and swims at Park Terrace Swimming and Tennis Club, where she worked with the ’09 girls team. Her partner in crime, Nick Piper (’19), taught the ’09 boys team. They both taught proper swimmers technique, cheered swimmers on at meets, and even earned one of the most prestigious awards at Park Terrace. The Gerry Brosemer Award is named after a very dedicated swimmer who passed away and is one of the most meaningful and emotional awards for a swimmer at PT to win. This sportsmanship award is usually given to a guy and a girl, every year who show the most responsibility, hard work, and best attitudes all summer. 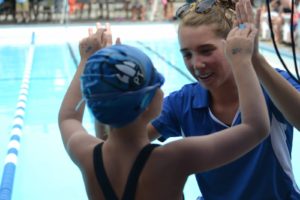 Coach Poppy cheers on her swimmer at a race.

“I was really shocked because usually it’s an 18 year old or a graduating swimmer that wins it, so I was not expecting it all. I was actually expecting my other friend to get it,” she recalled. “I just started crying on the spot, and especially to win it with Nick Piper who is my best friend and my brother — it was really meaningful.”
It also meant quite a lot to Nick, who felt like he finally meant something to the club and that all his work had finally paid off.
“If was finally nice to be recognized for all my hard work and effort I put into the club, and especially amazing to win it with Poppy because we are best friends and had been swimming for the same amount of time.”

Poppy and Nick pose together after winning the Gerry Brosemer Award.

When swim was over, Poppy decided to pick up another job at Cycle Life, a community exercise studio that offers “ride to the rhythm” indoor cycling classes for people of all ages. She works five days a week after school and on the weekends, where she greets at the front desk, and gets shoes, towels, and weights ready. Working at the front desk of any job can be a lot of work, but putting on a smiling face 24/7 is one of Poppy’s favorite parts of the job.

“I love getting to interact with all the riders and workers there — my boss Becca is so fun,” Poppy says. “I’ve met a lot of cool people.”
When winter rolls around, expect her to be at the top of Heavenly ready to ski down her favorite kinds of slopes and moguls. She has been skiing since she was four years old,  going up about every weekend in the winter time and spring with her family. They’ve have skied in Canada, Idaho, Colorado, Utah, New Mexico, and of course Lake Tahoe. Poppy has always enjoyed the time she gets to spend with her family on the slopes, but especially her with her dad.
“My dad and I always ski together, and try to hit almost every run,” she says. “It’s impossible, but we try our best.” 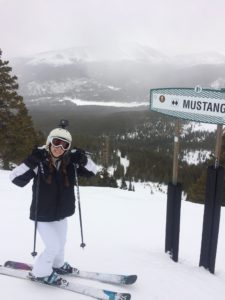 Poppy about to shred the gnar

Although her extracurriculars can get her pretty booked, she somehow finds time in her days to fit in school activities. She takes initiative with Falcon Force to help plan rallies and get the crowd pumped up on big gamedays. Planning can get pretty intense during the lunch meetings every Tuesday, but according to Justin Kim (’19), Poppy keeps the peace.
“Poppy is the glue to our Falcon Force team and holds everyone together and keeps everyone calm from going at each other because in the meetings things can get pretty hot — everyone can start getting at each other,” he says. “She always manages to calm everyone down.”
Be sure to keep an eye out for Poppy “the Popstar” Ruyak, the spunky 5’2 fun-loving Senior. Whether its swimming laps in the pool, cheering loud at football games, booking a bike at Cycle Life, or flying down the slopes in Lake Tahoe, Poppy is your girl.
Tagged: Justin Kim ('19), Nick Piper ('19), Poppy Ruyak ('19)
Share: 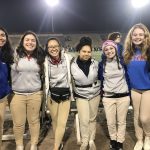 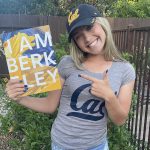 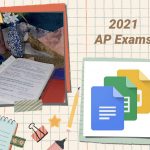