You are here: Home \ Community \ Featured Posts \ A Double Replacement In The Science Department
Community
0

A Double Replacement In The Science Department

Walking into class this year, many students were surprised (and maybe disappointed) by some surprise changes in the science department. With the absence of a physics teacher, Mr. Bernie Eckel has moved to fill the role while Ms. Holly Keller has stepped up to take his place in chemistry. But this switch was just as […] 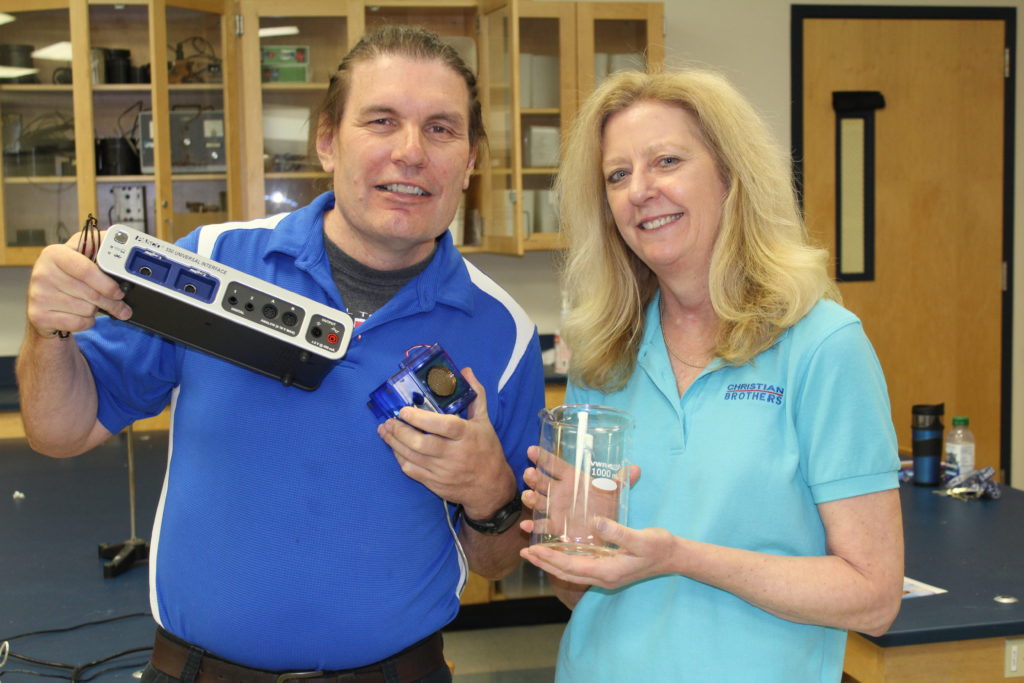 Walking into class this year, many students were surprised (and maybe disappointed) by some surprise changes in the science department. With the absence of a physics teacher, Mr. Bernie Eckel has moved to fill the role while Ms. Holly Keller has stepped up to take his place in chemistry.

But this switch was just as sudden for the teachers as it was for us.

“I didn’t actually think I was going to teach physics until the school year started,” Mr Eckel remarked, though he acknowledged that rumors of the shift have been going around since last May. As a result, Mr. Eckel is using mostly his predecessors’ curriculum, but he plans to expand it in future years.

“Next year it will be quite a bit different,” he claims, “I’ll be including stuff from both mechanics and electricity.”

While Mr. Kevin Van Den Bogert only taught material for the AP Physics C-M test, next year Mr. Eckel plans to teach both for that test and the AP Physics C-E&M test in the same class. He’s confident his students can handle the extra material. Ms. Keller responded similarly.

“I’m using a lot of what [Mr. Eckel] had,” she says. “We’re still using the same book, and I’m using his test questions.” However, Ms. Keller is also making some notable changes, including getting rid of the infamous WebAssign, reducing the class to a single set, and introducing students to the test format right from the get-go.

“I’m not trying to fill [Mr. Eckel’s] shoes,” she explained, “I’m just trying to be a good AP Chemistry teacher.”

Though he loved teaching chemistry, Mr. Eckel finds it easier to teach physics.

“Chemistry is the first class where, if people have done well in science, they start to struggle,” he remarked. “But people get physics a little better, and everyone knows what they’re getting into. Chemistry is a lot of problem solving, but it’s also memorization. Physics is pure problem solving”

Ms. Keller agrees that AP Chemistry can be a struggle.

“I passed out a bunch of conceptual stuff, and students were asking ‘What is the right answer?’ And I said you guys have to figure it out. You have to reason and you have to understand it. I’m not just going to tell them A, B, C, or D. Chemistry is getting you to inquire based on what you know and then test it”

In addition to teaching the AP class, Mr Eckel has also taken over the CP and Honors courses, and warned that there are some hefty differences between them.

“If you’re taking the regular course, it’s not as quick, but I go over the same concepts,” he explained. “Honors is a lot faster and there’s a lot more math for kids that are going into science. The AP kids are actually at a disadvantage. There’s a lot more problem solving, a lot more math, but no electricity because it’s not in the curriculum for the test.”

“AP goes so much deeper into electric and thermochem. In honors, we might brush over a law, but we won’t go into it. In AP, we will.”

To the dismay of those who’ve had Mr. Eckel in the past, he’s adopting a different mindset for the new school year.

“In chemistry,” he claims, “my biggest downfall was not holding people accountable. This year, if you don’t step up to the line, your grade will represent it.”

He further warned any AP students that “there’s going to be some struggle, and some disappointment.”

This is Ms. Keller’s first year teaching an AP course, and while she has Mr. Eckel’s curriculum, she still has a few concerns.

“My only fear is the unknown,” she admitted. ”I worry that [my students] won’t study enough. It all comes down to them doing the work. They just took their first test, and there were a lot of 100s, but there were also some lower scores.”

What many students may not realize is that this isn’t Mr. Eckel’s first time teaching physics. In fact, he taught physics at CB for four years before switching to chemistry and was actually behind the design of the physics room. While there won’t be quite as many explosions or fire alarms, Mr. Eckel assured Talon he is making this “a fun year.”

But what class should students take?

“Ideally, kids should take both,” Mr. Eckel claims. “But chemistry sets people up for science in college.”

“The AP thing is to get students to not just learn, but to understand on their own,” Ms. Keller says. “They learn it from book, from lecture, and from lesson, and then understand it and process it.”

As Mr. Eckel puts it, the bottom line is that students “leave and are excited about learning science.”