You are here: Home \ Arts \ Featured Posts \ Hitting All The Right Notes
Arts
0

Hitting All The Right Notes

People rarely leave jobs expecting to return 18 years later, but life takes many unpredictable turns. This year, the ever-changing Christian Brothers faculty welcomes back Mr. Christian Bohm as Choral Director. The Talon explored his journey to and from CB and his mission for the choir. From 1995 to 2000, Mr. Bohm ran Christian Brothers […] 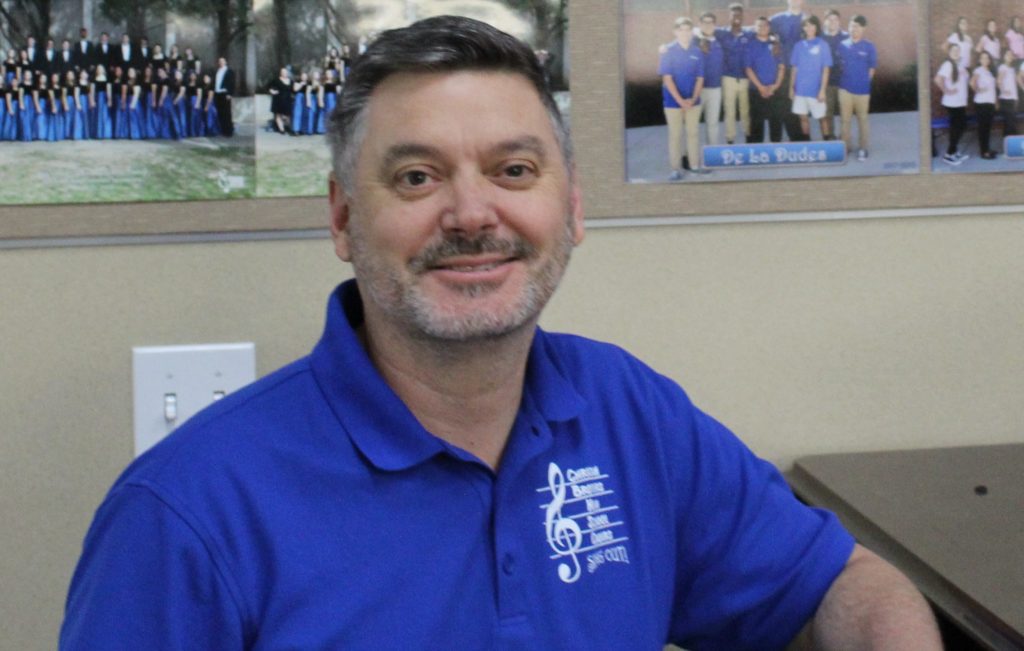 People rarely leave jobs expecting to return 18 years later, but life takes many unpredictable turns. This year, the ever-changing Christian Brothers faculty welcomes back Mr. Christian Bohm as Choral Director. The Talon explored his journey to and from CB and his mission for the choir.

“I was the everything guy,” he reminisced with a smile.

But then Sacred Heart Cathedral in San Francisco invited him to work as a music teacher, and he accepted this new opportunity.

“They basically asked me to come…their numbers had dropped a little bit, they wanted me to beef up the program, and I did. I got a lot of different choirs started.”

In addition to directing the choirs, he also taught AP Music Theory, which he hopes to start here as soon as next year.

“It’s a really great class,” he says. “It’s for choir kids, band kids, anyone who wants to take an AP class that has to do with music.”

As fulfilling as his work at Sacred Heart was, Mr. Bohm still missed his family and his home in Sacramento, including the Christian Brothers community.

“I came back because my family is here, my home is here,” he says. “And I love Christian Brothers…it’s always been my home.”

He eagerly praises CB students as “hard workers, really good to each other, team players.”

“I literally feel called to serve the students here.”

With about 65 students in choir and only 12 of them boys, the choir has been shrinking the past couple years. The dedicated teacher plans to change this, hoping “to get 100 in the concert choir, 50 boys, 50 girls.” And that’s just for the concert choir. This goal may seem overly ambitious, but the musician has a tried and true method.

“We’ve got to start out at the grammar school level and do a lot of promotion, get some of those kids in to see us sing, go to their schools and perform for them. Do a lot of outreach to those kids so that they so that they a) want to come to Christian Brothers High School and b) want to sing in the choral program.”

Mr. Bohm explained the second critical element: “I also am going to do some summer camps this summer with the grammar school kids so they get to know me, and I’ll have some high school helpers who help out the camps, and then the kids will get to know some of the students here, they’ll work on the stage, and they’ll really want to come to Christian Brothers High School and sing with the chorus.”

The third part of his master plan is for the choir to increase its presence in the Christian Brothers community.

“Just being able to perform more often for the student body, whether it’s at liturgies or at lunch or at assemblies and by increasing our presence in the school, I think some of the boys will be less afraid or embarrassed to sing in the choirs.”

Mr. Bohm is confident in his methods: “That’s how I did it at Sacred Heart Cathedral.”

“I think it will be very successful, and I love his plans on branching out the choir,” she says. She also notes that this year “there’s been a lot more opportunities for students in choir, not just in CB.”

Frankie appreciates Mr. Bohm’s open-mindedness, passion, and sincerity and explains how Mr. Bohm “is telling us about auditions for choirs outside of just CB, like city choirs, and these amazing trips.”

“He’s very open-minded to what students want to do with their time in choir and the songs they want to sing,” the junior says. “He’s very passionate about singing and choir and I honestly think he wants the best for all his choirs. There’s never not an educational moment — everything we do is meant to help us improve, there’s not a wasted moment in choir.”

“He has an amazing energy, and he’s very straightforward, which I think is great, especially when you’re doing stuff concerning the arts because I feel like a lot of people look to art as something that isn’t serious, as kind of just a break,” she added. “I think [Mr. Bohm] demonstrates that it’s so much more than that, and there are so many opportunities and so many great things about being a part of your arts program.”

Frankie says choir has become a relaxing place for her.

She encourages other students to consider choir as an elective and that Even if you do not think you are musically gifted, you can still give choir a try and have a wonderful time.

“It’s always the greatest people in choir, it’s all love all the time.”

With the return of Mr. Bohm, the Christian Brothers choir is looking very sharp this year.