Chances are, if you’re involved in lacrosse, Red Cross, swim, Moot Court, Student Council, KBFT, or even just show up to mandatory all-school assemblies, you’ve seen one of the Khaira twins actively involved in enhancing the CB community. Between them, seniors Meera and Navneet (Nav) Khaira (‘18) seem to cover every aspect of life on […] 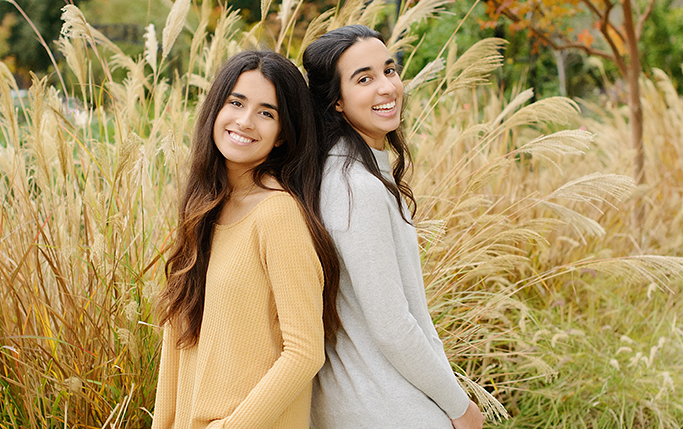 Chances are, if you’re involved in lacrosse, Red Cross, swim, Moot Court, Student Council, KBFT, or even just show up to mandatory all-school assemblies, you’ve seen one of the Khaira twins actively involved in enhancing the CB community. Between them, seniors Meera and Navneet (Nav) Khaira (‘18) seem to cover every aspect of life on campus while faithfully executing the Five Core Principles.

Although Meera and Nav share a similar dedication to schoolwork and helping others, the two have distinctly different personalities and interests. Ms. Kelly Safford, math teacher to both Khairas for multiple consecutive years, has come to know the twins quite well.

“A lot of times with twins there’s one with a really strong personality and one that’s timid,” Ms. Safford began. “But those two both have pretty strong personalities, and they’re both very outgoing but very, very different.”

Meera, Red Cross Club president, and Nav, Senior Class president, are both active leaders on campus; neither one of the friendly sisters shies away from interacting with her peers. Both are approachable and always make an effort to help others feel included.

Although Ms. Safford teaches Meera and Nav in different classes, she loves watching them interact during office hours and outside the classroom. 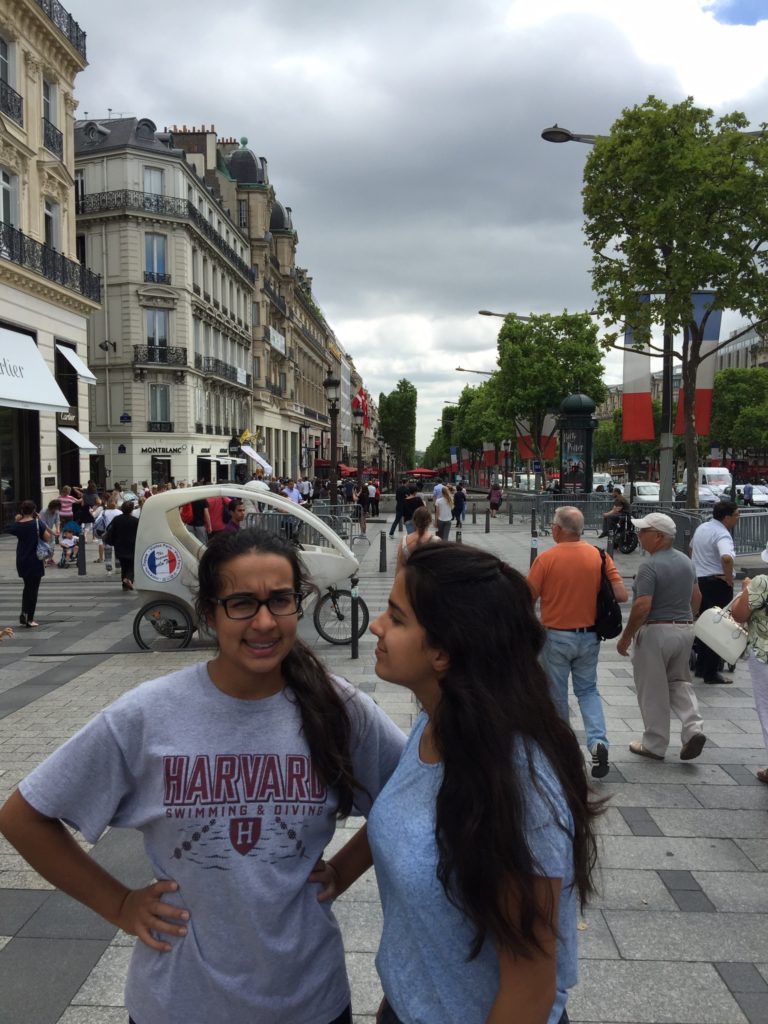 Meera and Nav enjoying each other’s company while vacationing in France.

“You don’t see it until they’re together, but they’re very competitive,” she said with a smile. “It’s funny to watch them together because they always give each other this funny look and then they start giving each other a hard time. At the same time, you know they really care about each other and are having fun being together.”

Meera and Nav may bicker about who’s the better and more capable twin (constantly!), but they truly do support each other when the need arises. Nav once told me that anyone who dares to mess with Meera immediately loses her favor as well; she would fight tooth and nail to protect her sister.

As far as other similarities, Ms. Safford notes that Meera and Nav share many character traits and even their classroom seating preferences. The teacher was amazed when both sisters chose the exact same desk in their respective free-seating math classes.

“They’re both very hard workers and they both have a witty sense of humor,” Ms. Safford said. “They’ve been so much fun to teach and have in class and get to know.”

Another person well-acquainted with the Khaira duo is my fellow Talon staff writer Gigi Geach (‘18), who Nav asserts is one of Meera’s favorite people on the planet.

“I’m definitely closer to Meera, but that’s more of a statement of how close I am to Meera than how little I’m close to Nav,” Gigi says. “I did Moot Court with Nav and we used to play lacrosse together, so those two things really made me hang out with her without Meera.” 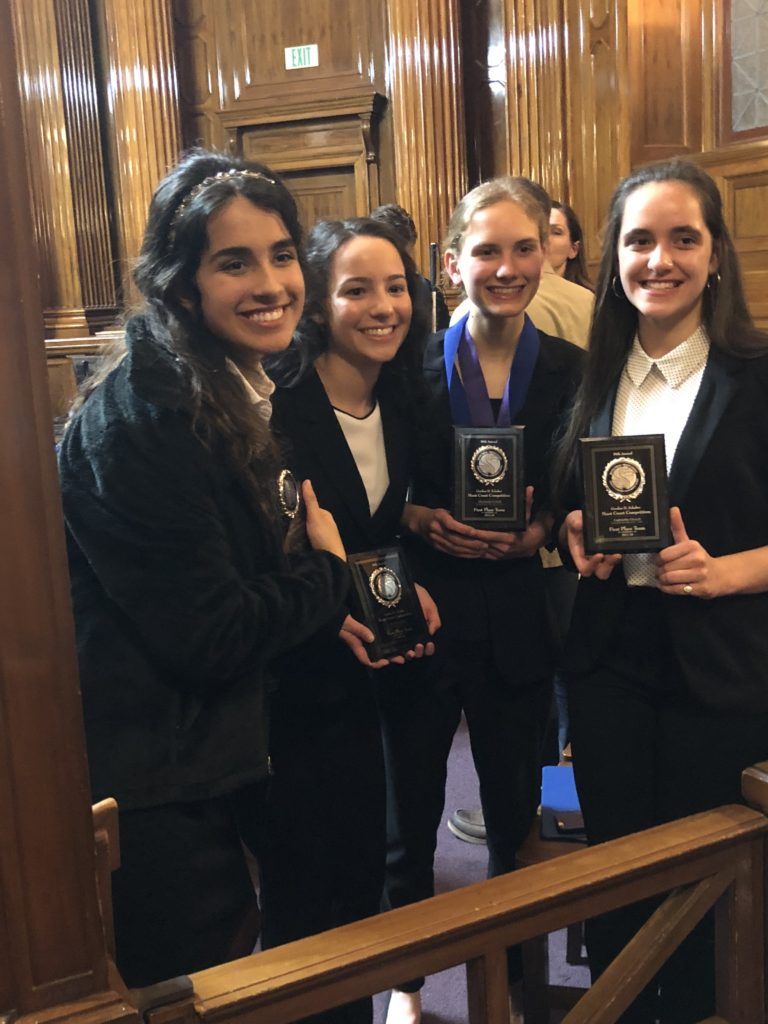 Gigi may be closer in friendship to Meera than Nav, but she has still interacted with and come to know both sisters. Whereas she and Meera “just hang out and watch different shows on Netflix,” Gigi usually finds herself on competitive extracurricular teams with Nav. In addition to these activities, the two also team up in one additional hobby.

“We bully Meera together sometimes,” Gigi said with a smile. “But it’s reciprocated, I promise.”

Gigi has seen the sisters interact in a number of different situations over the years. She has watched each grow throughout high school and commends them both for being so actively involved in all that they do.

“I admire how dedicated Nav is,” Gigi said. “She’s always working on something different and has some big thing going on. She’s always busy working towards some kind of goal.”

As a fellow member of Gigi and Nav’s championship Moot Court team, I can attest that Nav certainly puts her heart into all she does. The only correction I have for Gigi is that Nav never seems to have a single “big thing” going on, but rather dozens of big things! Nav even admits that she tends to “overcommit to school and extracurriculars.”

A little more familiar with Meera’s activities, Gigi used a specific example to explain one of her friend’s best qualities.

“I admire Meera’s commitment to things,” she said. “Like Nav, she’s always got something big going on, but she does stuff for the long haul, like with the Red Cross. She’s been in the club since freshman year, it’s something she’s going to continue in college, and she was even focused on it before she came here. She’s really good at staying committed to things. She knows what she wants and how to get there.”

The Red Cross is certainly lucky to have a president as dedicated and selfless as Meera, who seems to have a natural affinity for helping others. Whether it’s peer tutoring, sharing notes with someone who missed class, or taking off her sweater for a friend (me!) to sit on during an outdoor liturgy, Meera never ceases to put others above herself. Together with Nav, she is a shining beacon for the Lasallian concept of “inclusive community.”

Personal stories from teachers and friends are certainly valuable sources, but there’s no better way to get to know Meera and Nav than to hear from the sisters themselves. Although having a built-in other half had a significant impact on the Khairas as children, both agree that their status as twins has become less defining over the years.

“When I was little, it was more of an influence, but now that Meera and I are older, it doesn’t really impact us as much,” Nav claimed.

“Being twins felt like we were in some sort of duo; we were always grouped together,” Meera added. “At first our parents put us in the same things: we were in soccer, we were in Girl Scouts, we did lots of things together, but as we grew up we started to separate.”

Though they initially took part in the same childhood activities, today the teens have developed different hobbies and have selected to participate in completely different sports. While Nav chose to “stick” on dry land as varsity lacrosse goalie, Meera “dived” right into the world of swim.

Nav also notes that she and Meera differ when it comes to approaching new things and interacting with their peers.

“I don’t look before I jump and Meera’s more cautious in that [regard]. Meera also has a solid group of friends and I like going around and talking to everyone.”

Lifestyle preferences aside, the twins also have subtle, yet defining features that differentiate their similar personalities.

“Meera and I have almost the same personality type,” Nav explained, referencing an online test that classifies people using a variety of categories. “We’re both extroverted, we’re both empathetic, but she’s more open to change and adaptable and nice, and I’m more harsh and judgemental.” 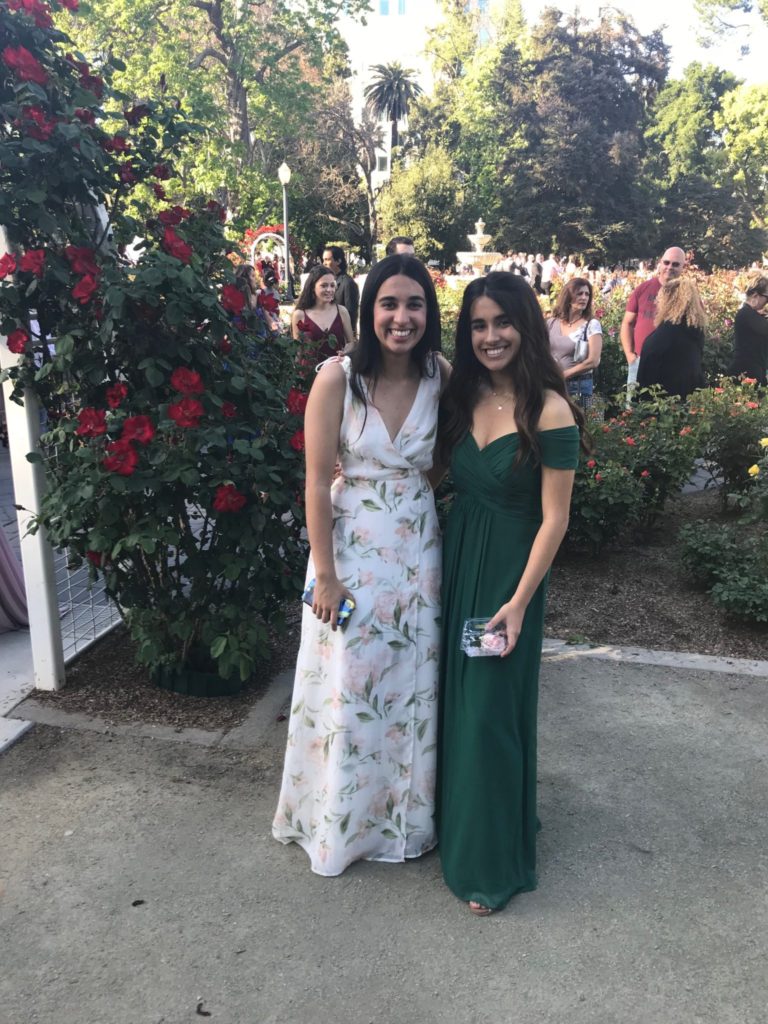 Meera and Nav dressed up for their final high school dance.

As Ms. Safford noted, Nav and Meera are both extroverted and enjoy interacting with their peers. Their commitment to serving others demonstrates their common empathy. And as for their character differences, even a brief conversation with the twins will reflect their undeniable individuality. Nevertheless, when it comes to certain things, the two appear to be of one mind, perhaps even literally…

“Ways that we’re similar include that we have the same humor,” Meera began. “We also think about the same things at the same time. People say that’s a fake twin thing, but it’s actually true!”

Lacking a twin myself, I can’t attest to the truth or falsity of twin telepathy, but according to Meera, this phenomenon is not only real, but is also very alive in connecting her and Nav. To explain further, the sisters told stories about their silent cross-classroom communication and how they often crack up together even when no one else is laughing.

Within their family, the twins play different, yet complementary roles.

“Meera is the comedy relief,” Nav claims. “And I’m the person who gives a day-by-day description. I’m the storyteller. At the dinner table, I’ll go through a 10 minute story about something that’s irrelevant and then Meera will say one sentence and everyone will start laughing.”

Both capable of providing entertainment, the sisters nonetheless take divergent approaches to doing so, and as a result, have distinct positions in their family dynamic. To get to the heart of their sisterly love, I also asked Meera and Nav what they admired most about each other.

“A good thing about [Navneet] is that she’s pretty supportive of what we do in our family, especially our parents,” Meera expressed. “When our mom is trying out for a new job, Navneet’s always really supportive of her. Same with my dad, and me, too.”

Nav has been elected to serve on student council throughout all four years of high school. Even those classmates who don’t know her well can sense her approachability and openness to new ideas. I’ve rarely seen Nav without a broad smile on her face, and her general nature puts others at ease.

As for Meera’s strengths, Nav’s words perfectly capture her sister’s self-assurance and amazing ability to just be herself.

“I’d say Meera’s best quality is that she’s very free-willed,” Nav said admiringly. “She doesn’t buy into norms or what society tells her to do, or what the trend is. She just does her own thing and I think it’s inspiring. She doesn’t need affirmation from people to feel good.”

Meera’s comfort with herself and genuine nature are refreshing and make her a joy to be around. Whether she’s sharing her love for K-Pop in a 45-minute Spanish presentation or proudly showcasing her third consecutive Vincent Van Gogh phone case, Meera always remains true to herself, regardless of what others may think.

Meera and Nav have undoubtedly made a significant contribution to the senior class and to the CB community as a whole. As Meera heads off to UC Santa Cruz and Nav sets out for Georgetown (on the opposite side of the country), they both seem assured of bright futures. The only question the remains is whether their twin telepathy powers will extend over such distance!