Eggs. Flour. A B+. These are are the necessary ingredients to make a Talon cake. While bouncing ideas off of each other, a group of Talon staff writers with a mutual love of cooking competition shows and eating cake wondered, “Who among us would win in a bake-off?” Hungry to find out (and in knead of articles), they […] 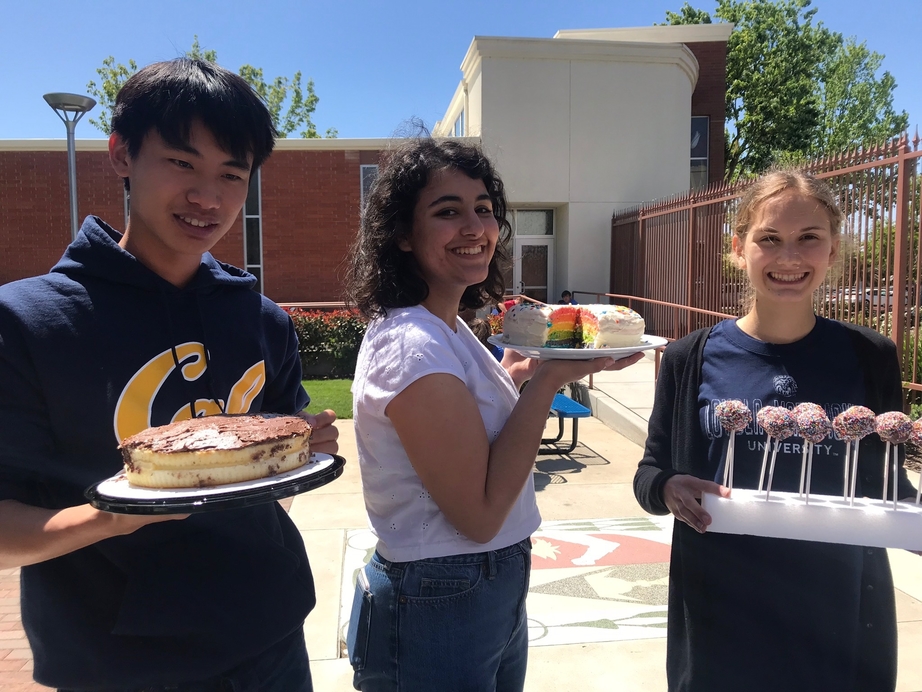 Eggs. Flour. A B+. These are are the necessary ingredients to make a Talon cake. While bouncing ideas off of each other, a group of Talon staff writers with a mutual love of cooking competition shows and eating cake wondered, “Who among us would win in a bake-off?” Hungry to find out (and in knead of articles), they had the delicious idea to host their own cake competition.

Alex: An idea brought about from our desperation for articles, the Talon decided to host our very own Talon Bake-Off. Talon Staff writers Michaela Cahill (‘18), Saya Chhabra (‘18), and Delaney Bird (‘18) were each supposed to bake a cake for judgement. Unfortunately, since Delaney is a studious flake with tests, certain actions had to be taken. 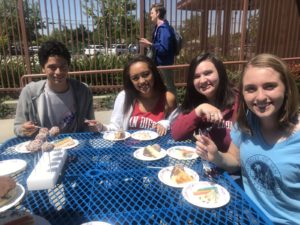 Saya: While Michaela and I poured our blood, sweat, and tears into our cakes (or cake pops), Alex, Delaney’s replacement, took a… different approach.

Alex: Preparations were difficult. The Bake-Off brought people to tears.

Saya: Michaela had a breakdown while baking a staggering 40 cake pops and got kicked out of her kitchen by her mother. I spent hours making my cake, which had six thin layers. By the end of my Sunday, my kitchen was so covered in flour and powdered sugar that it looked like a winter wonderland.

Alex: The logistics of the Bake-Off were also difficult. Michaela, with nine department awards, had tests to study for, and Saya kept hounding her teacher to make up her test at lunch. The result was a Bake-Off that kept getting pushed back. There is also a shortage of refrigerators available on campus, forcing the three master bakers to scrounge for refrigeration. Most frustratingly, our fellow Talon writers all wanted a piece of the pie (or cake in this case). My loyal competitors, Michaela and Saya, abandoned me in the Talon Newsroom, forcing me to make the tough decision on which writers would comprise our prestigious judging panel. 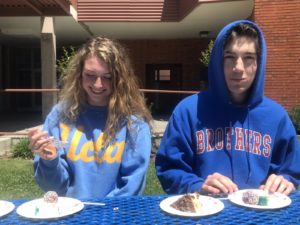 Saya: After much thought, we came up with a simple judging system. Each judge would rate every cake in three categories: taste, presentation, and effort. We would then take the average score in each category to determine its victor, and the total of all three would decide the ultimate baking champion.

Alex: Objectively, I should have won all three categories.

Saya: Based on our judges’ initial reactions, Alex was definitely on the bottom. 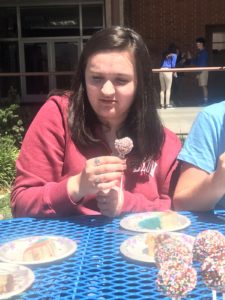 Alex: To be fair to myself, Michaela and Saya approved of a store-bought cake before the competition began under the condition that it look homemade. And I wasn’t even supposed to be a baker in the first place; Delaney was! Poor me had to buy a cake, scrape off the ganache, and reapply a different layer of frosting — much more work than I ever thought would be expected of me. And then everyone thought that I thought people wouldn’t be able to tell that my store-bought cake wasn’t store bought.

Saya: I have to say, Alex’s cake did look homemade, per the opinions of many random underclassmen we asked. I don’t know whether this is a sign that his decorating skills are good or abysmal (it’s probably the latter).

Alex: It wasn’t like my cake was the only disaster. Exhibit A, here’s a photo of Caitlin trying Michaela’s cake pops. How do you think that cake pop tasted?

Saya: This photo was simple taken at a bad time. Caitlin thoroughly enjoyed her cake pop, and, in the picture, is simply contemplating its complex flavors. In fact, informed that she appeared disgusted in a photo, she said, “Wait–what? Seriously? The cake pops were my favorite!” 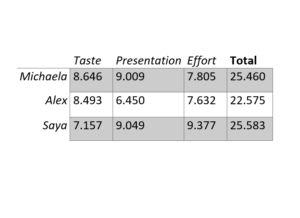 Alex: The Bake Off team would like to thank Talon Staff Writer Emily Davis (’18) for acting as our amazing photographer.

Saya: Finally, the results were in. For the taste category, Michaela was the victor, beating Alex’s store bought cake by a slim margin. Despite coming in second in taste, Alex was demolished in the presentation category, and I came out on top by only 0.04 of a point. In the effort category, I won yet again, but this time, I beat Michaela and Alex’s scores by more than 1 full point.

After this long and arduous bake-off, I emerged the victor by a lilliputian 0.123 of a point. Although I am happy about the win, I would like to graciously thank my worthy competitor — and the other one, too.  For aspiring bakers, I have a piece of advice: a little extra effort goes a long way.