You are here: Home \ Community \ Featured Posts \ Featured: The Fairest Of The Embarrassed
Community
0

Featured: The Fairest Of The Embarrassed

Let’s face the facts: every single person at Christian Brothers has had an embarrassing moment during a regular day. A slight trip of the feet, a ringing phone in the middle of a lecture, leaving an iPad in a classroom over the weekend, forgetting what someone’s name is — all of these are perfect examples of the […] 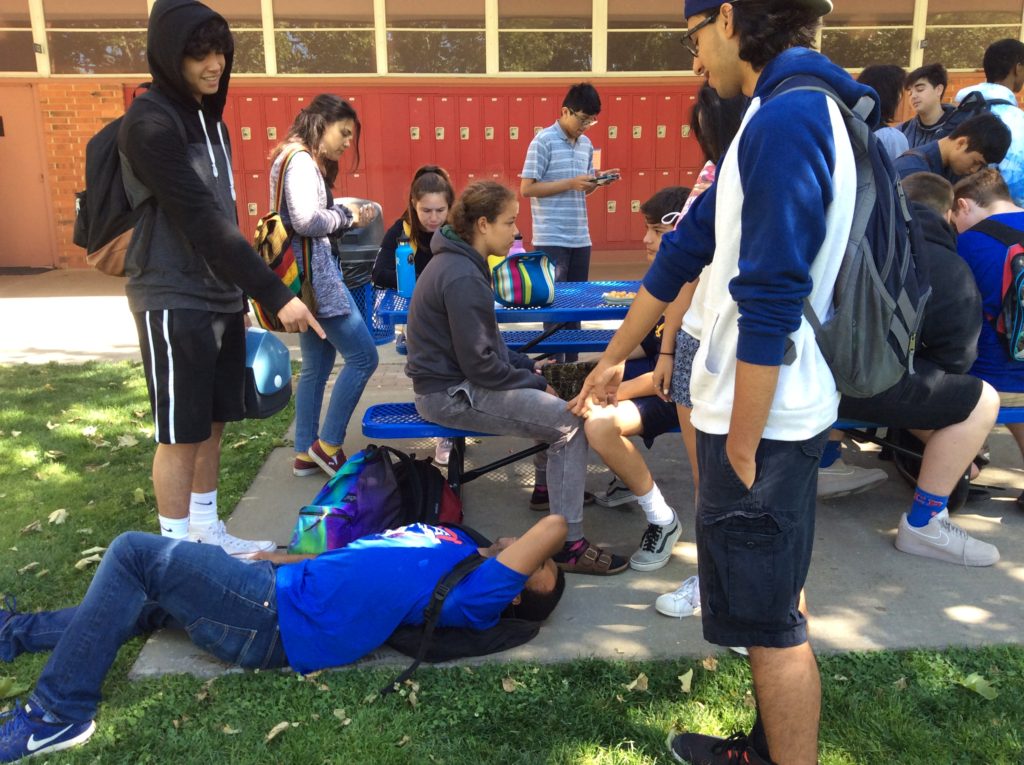 Let’s face the facts: every single person at Christian Brothers has had an embarrassing moment during a regular day. A slight trip of the feet, a ringing phone in the middle of a lecture, leaving an iPad in a classroom over the weekend, forgetting what someone’s name is — all of these are perfect examples of the amazing moments each person can experience during the day. Since seniors and teachers have been here the longest, it would make sense for them to have a lot more mortifying experiences such as these. These particular individuals were confident enough to share their unforgettable moments of their life.

Cesar Borrego (’18) told us about the time he nearly broke one of the KBFT lights during Open House his sophomore year.

“I was showing my sister around the campus because she was in the process of choosing the high school she would be attending. She wanted to see the KBFT room so we headed there. The room was filled with students, teachers, and visitors so it was pretty crowded. Eventually, we were next to a couple of cameras and lights as I was showing her the teleprompter. I unintentionally bumped the light behind me so it started to wiggle back and forth right before it fell. I caught it, thankfully, but everyone was looking in my direction as I stood it back into place. That was probably one of the most embarrassing things I have done here,” Cesar stated.

The worst feeling in the world is that moment of realization you get when you recover from a humiliating action. It is almost like you can feel all the eyes piercing you as they glare in your direction.

We all have stories of tripping or stumbling while walking in the hallways. But what if you were about to perform in front of a crowd of people as a cheerleader? Having trouble picturing yourself in that situation? Samantha Noe (’18) can help you out.

“We [the cheerleaders] were about to run out before a basketball game started in the gym. As we were running across the floor, I tripped. It was terrible, embarrassing, and the worst,” Sam commented.  It might seem like the most horrid thing in the world when something like this happens, but eventually it will become something to laugh about with your friends. When Sam shared her story with me, we shared a smirk and laughed. Moments such as these have the capability to fortify the friendships you create with others.

Jordan Abdel (’18) had the great privilege to let everyone in his Algebra I class hear his ringtone out loud when he forgot to put his phone on silent.

“I remember the time I accidentally had my phone on full blast in my Algebra I class, and the ringtone was something so stupid like it was just some dude making the weirdest possible noise,” Jordan said. “I was so embarrassed because it was completely silent so everyone heard it.”

That reminds me of the time when Siri decided to tell me directions to my house in the middle of my freshman literature class during a free reading session. Being the least situational aware person on this planet, it took me a good minute until I realized that the Siri speaking was none other than mine.

Did you know that there is an actual reason for those special shoes at the bowling alley? Ron Camsura (’18) figured that out the hard way after a tumble on a lane.

“I was at a birthday party with a couple of friends at Country Club Lanes, and one of them decided to throw my hat across one of the lanes. I wasn’t wearing the shoes that they gave us earlier, so I slipped on my back when I went onto the lane. All of my friends were on the ground laughing and crying. I was laughing pretty loud too though so it was okay,” Ron stated.

I was blessed to be at that party when Ron went down, and I can say that it was one of the most hilarious things to experience. The part that I found the most hysterical was the fact that all of the people watching Ron’s fall fell to the ground out of pure laughter.

I truly wish that I was there when Kelsey Wurm (’18) mistakenly tried to open a senior locker during her freshman year while that senior was present.

“I tried opening a senior’s locker thinking it was mine. The senior watched me the entire time. I said sorry and ran away,” Kelsey divulged.

I could only imagine the humiliation Kelsey gained from this moment. Being a senior, I would find it extremely funny to see a freshman begin to turn my lock. Hopefully Kelsey’s mistake reminds the freshmen class about the (mostly) horrifying seniors.

Have you ever seen the Spongebob Squarepants episode titled “Ripped Pants“? You would be lucky if you did because Damon Sterrett (’18) had to live through it at the Christian Brothers parking lot.

“I was in the CB parking lot, and a couple of friends and I were about to leave to go hang out. I threw my backpack in one of their trucks and then stepped up on the tailgate. I misjudged the strain of my khakis, so I had a huge hole rip right in the middle of them when I planted my foot,” Damon disclosed. “Thankfully, only one person noticed since I covered the tear with my backpack.”

I could not believe that this actually happened to Damon. I always thought this happened to people in cartoons or movies, but it was shocking to hear about this story. I practically died of laughter after hearing about this, but now he and I share a humiliating story about each other.

Damon was there for one of the most death-defying moments of my high school career. Ms. Holly Keller was my Chemistry teacher junior year, and she had just assigned a lab for the class. By mere coincidence, Damon was in my lab group. We were doing something with water reacting to our breath, so she gave each group one tub of water. Since I am the most intelligent person on this planet, I thought I could pour the tub of water on my own. In almost an instant, water was on our table, our clothes, the floor, the counter, and my face. All I wanted to do was leave the classroom and go home.

Presentations can be stressful and tough. But what about presentations in a different language? Marie Barros (’18) told the Talon about her impeccable French presentation her sophomore year.

“I had to present something in French for my sophomore year class. I was completely mispronouncing the words I was supposed to say. I practically looked like an idiot in front of the class,” Marie stated.

I am positive that we have all had that one presentation that literally and figuratively placed the world on our shoulders. I recall a time where I was in the same position in my Spanish 1 class. I looked like a total fool. Simply thinking about presenting something in a different language in front of classmates is cringe-worthy.

Mr. Robert Boriskin takes the cake for the most embarrassing moment in history. It took ten days for Mr. Boriskin to decide to propose to his wife, and the outcome was not what he expected.

“Before I decided to propose to my wife, I had known her for exactly ten days. She and I had been on a few dates, and I just felt like she was the one. So I bought a ring, met up with her one day, got down on one knee, and asked her to marry me. She said, ‘Are you crazy?’ over and over again. That was really hard at first but looking back now it is kind of funny,” Mr. Boriskin said.

Thankfully, Mr. Boriskin was asked by his now wife to ask her again a few days later. This time she said yes, and ten simple days turned into 33 years of marriage.

It is pretty incredible to laugh about something in the past that was once considered to be the most humiliating thing ever. In my opinion, these moments are the best to reminisce about with close friends and family. A couple days ago, my friends and I lit a bonfire and began roasting marshmallows. Soon after the first couple of marshmallows began to roast, we started talking about memorable moments together. Wouldn’t you know it, most of those moments were those such as Ron’s fall at the bowling alley. This went on for about an hour, and every single moment was astonishing. Whether you are bumping into a light, recovering from a fall, presenting in a different language, running from the senior hallway, covering a hole in your pants, or proposing, remember that that moment will be a funny memory even if it might seem like the end of the line during the actual moment.