The News About Cruz

You may have recognized Cruz Solano’s (‘18) friendly face around campus. Or maybe you’ve seen his art work throughout CB. Either way, if you don’t know him, you should, and that’s why Talon has taken the initiative to give you a glimpse into his life. Cruz is someone who describes himself as outgoing, friendly and inclusive, […] 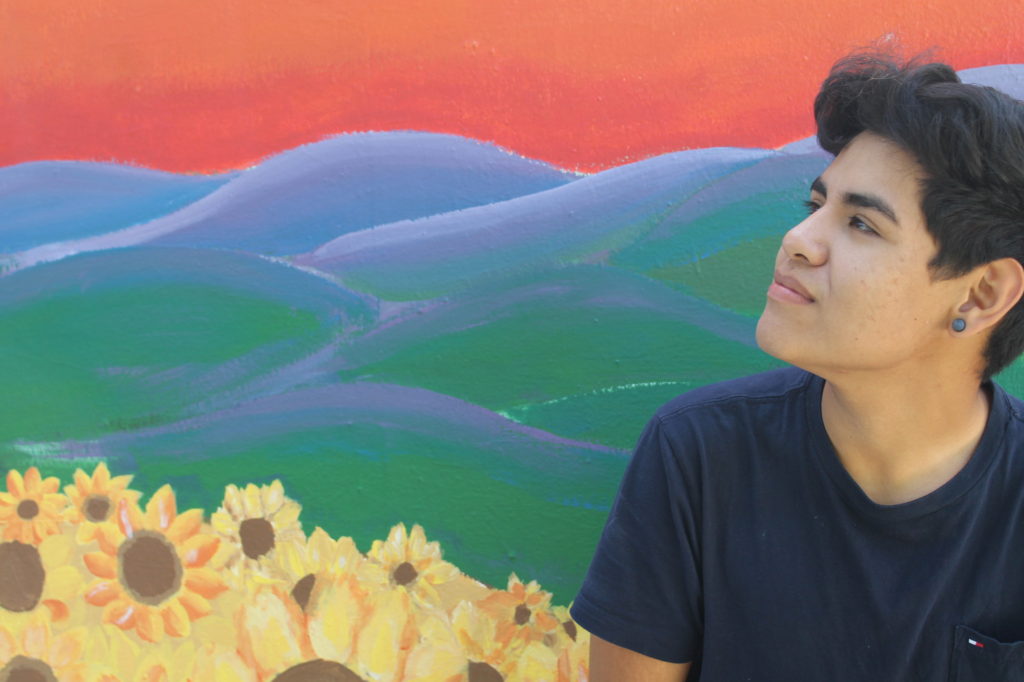 You may have recognized Cruz Solano’s (‘18) friendly face around campus. Or maybe you’ve seen his art work throughout CB. Either way, if you don’t know him, you should, and that’s why Talon has taken the initiative to give you a glimpse into his life.

Cruz is someone who describes himself as outgoing, friendly and inclusive, and anyone who knows him will say that these attributes are true. He is truly a great friend and a blessing to have on campus. Cruz is skilled at speaking up for himself and finding ways to better communicate.

“Growing up in a big and loud family taught me a lot about social skills because when there’s so many people and I’d have to use my voice to get my thoughts out there.” he says. “If my mom was like, ‘Where are we gonna go eat?’, you’d have to yell for your life before anyone else made the decision.”

He found interest in other people and being social at a young age.

“I was always just out there, when I was a little kid I always wanted to talk and I would always ask questions,” he says. “I wanted to know more and this branched out to wanting to know more people.”

“I remember in 4th grade I’d be loud and outgoing in class, I’d start singing on the top of my lungs or I’d dance and make the whole class laugh, even the teacher. At the end of that year I got the best singer and artist award and everyone was clapping — it was my thing.”

As a kid, Cruz didn’t see social boundaries and did what made him happy.

“I didn’t really care what people thought because I was really content with myself, I was a really happy kid and could entertain myself.”

But as Cruz was growing up, he became more aware of social boundaries that made him more hesitant.

“I started being a bit more self-conscious in 6th grade and limited me in a sense because I realized how much other people started to care about how they presented themselves and their looks,” the senior says. “As a kid, you’re more carefree and you just do you.”

This was a minor shift in the amount of singing he does in class, but you can always catch a smile and good energy from Cruz. Cruz is inspired by his family and has learned honesty and the importance of family values through them.

“My biggest influence is definitely my mom and dad,” he says. “They both had rough lives as kids and wanted to better themselves — they have. Hearing their stories of their growth between now and then is very inspiring.”

“I feel like the word love doesn’t describe how much I care about them and I have a really strong connection with them.”

Like his parents, Cruz loves fashion and finding new and cool things to wear.

“They have a great sense of fashion, and I’m always impressed looking back on photos.”

Cruz has some basic morals that he lives by, including his constant positive energy.

“I don’t like seeing people being mean or disrespectful to others, something my mom would always tell me is if you don’t have something nice to say don’t say anything at all, why be rude to others and bring down their day?” Cruz stated. “I’m big about the vibes that people give off, and when people are positive, it helps bring us up.”

Cruz has a passion for wanting to be able to talk to anyone and make them feel included and that their opinion is valid.

“I felt kind of left out when I was younger in 8th grade, everyone was playing sports and in their own little groups and I wasn’t really athletic. After awhile I realized not everyone is inclusive, and I didn’t want to be like that.”

He tends to make people feel comfortable because he is very excepting of individuality. Cruz’s open eyes helps him to reach out to make everyone feel loved — he is very caring and generous.

“I really like spending one on one time with other people because I feel that’s the time when you bond.”

Cruz’s met one of his best friends, Erica Scholz (’18), through the four year art program.

“He’s one of my only friends that appreciates art like I do,” she says. “We can always sit by each other and help each other become better artists, which also led to a beautiful friendship.”

Carlos Pasillas (’18) states that Cruz always can uplift his day, and he can count on Cruz for any kind of help with school and just in general.

“Cruz is one of my closest friends, one of my best friends — family to be honest,” says Carlos Pasillas. “He’s helped me through some tough times. Even though I’m not the best person, he’s always stuck with me through thick and thin.”

“He’s always got a smile to make my day brighter. I love talking to Cruz because he has a nice positive energy and I feel like I could tell him anything. He’s never judged me and always makes sure I’m alright,” Carlos says. “Cruz is genuinely the nicest person I know — he always has my back.”

Cruz contributes his talent to the CB community by submitting art pieces and helping with the senior mural.

“The four year art program is my favorite aspect of Christian Brothers because they give young artists the opportunity to hang their art up in the B Street Theater and with the La Salle art show,” he says. “It helps young artists get their work out there.”

Art instructor Mrs. Christine Kerr has been following Cruz’s art pieces through the La Salle Art Show and was ecstatic to have him in class this year for Ceramics 1A and Advanced Painting and Drawing.

“He is very hardworking and motivated,” she says. “He will get in his own zone, but at the same time, he is encouraging other students and sets the tone for the room.”

“His originality and his ability to use himself and dive deep into his works help to put himself out there is tremendous and he has a tremendous sense of craftsmanship,” she added. “He works until he gets it right and doesn’t take the easy way out.”

Mrs. Kerr is a fan and a teacher to Cruz and can see his art progressing.

“He is getting his own style, and with his use of textures and colors, he is coming into his own,” she says. “I’m a huge fan of his and I can’t wait to see what he creates in the future.”

Mrs. Kerr realizes that Cruz is not only a fantastic artist but a great classmate and student.

“Cruz always brightens your day when he comes in has a huge smile — you can’t be in a bad mood around Cruz and he brings that to the room or if you’re just walking about. His outlook on life and his charisma is contagious, and I feel blessed that we’ve had him at CB for the four years.”

Cruz has made CB such a wonderful place and his positivity has impacted many students and teachers on campus. He’s a joy to be around and can brighten any bitter day. To spread positivity and peace on campus, you have to start with yourself and genuinely caring and respecting others is a great way to make school a bit easier. No one wants to be left out or discriminated against, so take time to include those you wouldn’t normally. Good karma will come your way if you choose to lead a good life.

Cruz is a perfect example of someone who is inclusive and real. Even throughout the struggles that goes on during high school, Cruz continued to work on himself to become a better person and is forever growing to be someone who is respectful, kind and creative.