The Jedi Master Of Ceramics

As you go pass the 300 wing, you’re likely to find the bright smile that seems to permanently reside on CB Ceramics instructor Mr. Rob Boriskin’s face along with the clay stained clothing on students who have just had the opportunity to work in his classroom. Mr. Boriskin grew up in Southern California in a town […] 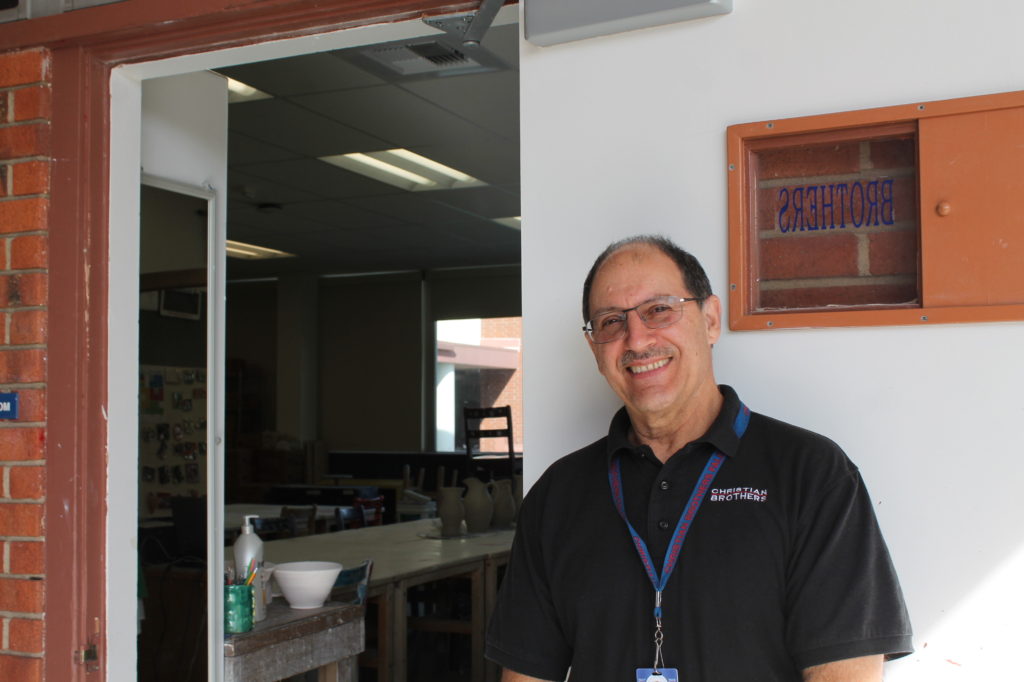 As you go pass the 300 wing, you’re likely to find the bright smile that seems to permanently reside on CB Ceramics instructor Mr. Rob Boriskin’s face along with the clay stained clothing on students who have just had the opportunity to work in his classroom. 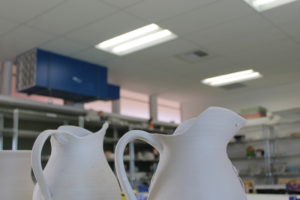 Ceramic pitchers after the first fire made by Mr. Boriskin.

Mr. Boriskin grew up in Southern California in a town named Tujunga, where he fell in love with surfing. He lived 20 Minutes away from the beach until he was 18. From there, he moved to another town named Van Nuys and started to attend Valley Junior College, but he soon flunked out and was drafted into the military for 19 months with a tour in Vietnam, where he learned the value of education.

“I really wanted to get through school,” he said, “I noticed that with an education there are better jobs with better positions and while being drafted with out an education I had to listen to people, who I didn’t have a lot of respect for, tell me what to do, and I said I don’t want to do that for the rest of my life.”

After the military, he attended Moorepark Community College, where he was able to take a ceramics class.

“The first time I touched clay I fell in love with it,” he says.

He was offered a lab assistant job by his teacher and was able to fire the kiln and help teach other students. He then transferred to UC Santa Cruz to become a history major with a focus on European intellectual history. After graduating, he gained a teaching credential and then spent 32 years working for the state with a suit and office telling people what to do.  The state government treated Mr. Boriskin well and he worked in six different departments.

“It was a very interesting experience,” he said. “I learned a lot of things and was able to have a tremendous amount of flexibility”.

Along the way, he was set up on a date that turned into a beautiful love story. While after only ten days of knowing each other, he knew his wife was the one — 31 years later they are still happily married.

“Relationships are a lot of work, and while for this generation too many things come too quick and too easy, life is not that way,” Mr. Boriskin says. “We need to invest the time and energy and I know my wife and I make time to work things out.”

He was able to learn these lessons from his parents, who”valued goodness, hard work and family.” These values are carried by Mr.Boriskin. He advises to wake up every day and make choices that you think are right and to follow your morals.

Mr. Boriskin is also a proud father and says that seeing the miraculous process and valuing the joy of the work is one of the best things about being a parent.

But at this stage of Mr. Boriskin’s life, his favorite part of being a parent is being a grandparent.

“It’s like watching the miracle all over again but with a little distance and much easier,” he says.

As he was getting ready to retire, he was invited to work at the UC Davis craft center to mix glazes and get free use of the ceramic facility. He started teaching beginning wheel throwing at UC Davis in the evenings and on weekends. He had students from on and off campus who ranged in age from 18 to 80.

When he was close to retirement, he decided to try out real estate and was working with loans and ended up not enjoying it. While his children were attending CB, he was approached about covering a ceramics class. He had been retired from the state by this time and teaching was a good way to get out of real estate.

Fellow Art teacher Mrs. Christine Kerr states that Mr. Boriskin is the “Jedi master of ceramics” and has an ability to throw clay at a superhuman speed. He is able to create 60 bowls in a day where even in her 20s, she could have created six in a day. His intense focus and years of experience adds to the structure of an amazing and inspiring teacher.

During the summer of 2017, Ms. Kerr and Mr. Boriskin were able to recreate the ceramic videos to enhance the flipped classroom, which is a class where you learn at home and do in class. While doing so, they had to be really creative in their collaboration. The relationship of inspiration didn’t end there. Ms. Kerr states that they “complement one another — he will throw and I’ll sculpt and glaze.”  They are able to bounce ideas of each other and he tends to inspire Ms.Kerr

Ms. Kerr describes Mr. Boriskin  as a very positive and well organized individual who is refined in his work. Mr. Boriskin looks forward to being challenged by and teaching the students while working at CB.

“He really enjoys what he does, he’s passionate, he loves helping and making students push themselves while giving them freedom,” Mrs. Kerr says.

Student Leyla Soltani (’19) decided to take ceramics out of curiosity. Leyla is a firm believer of ceramics being therapeutic because she’s able to find solace in creating various projects.

“My favorite part of coming to class is being able to unwind with my friends. It is such a vital part of my year because it is the only class where I can truly forget about stress,” she says. “Mr. Boriskin is not only a great instructor, but also an awesome figure when it comes to actually listening to the student and their needs. He really has a passion for pottery and easily translates that to students with ease and patience.” 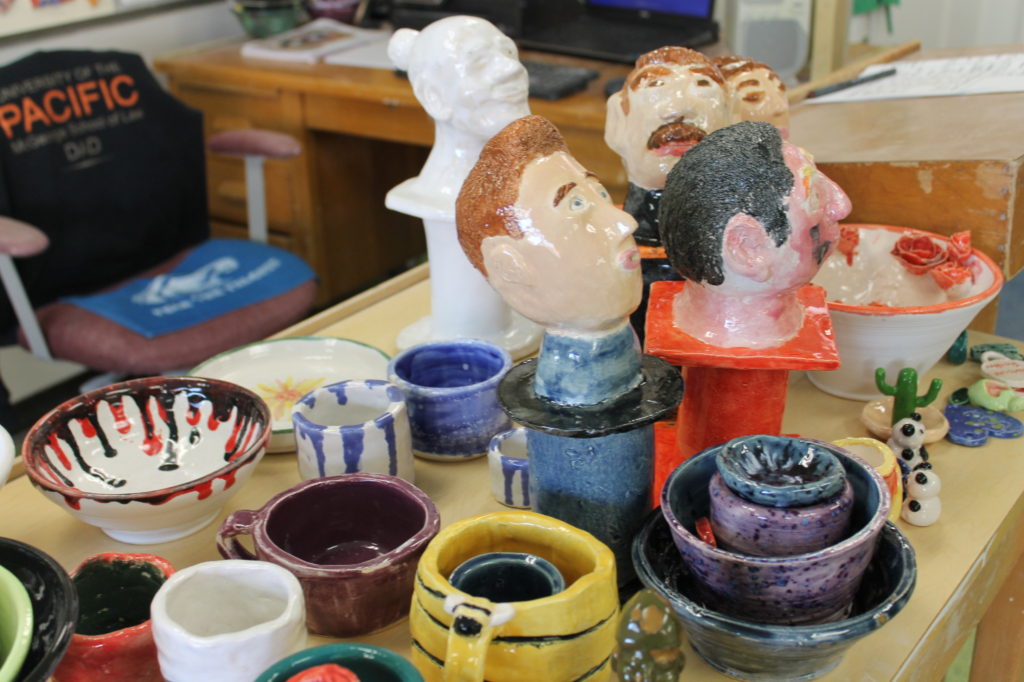 After taking ceramics for two semesters, she has found interest in being a teaching assistant to Mr. Boriskin.

“Mr. Boriskin is really great and his love for ceramics is pretty infectious.”

Past teaching assistant Miles Magaletti (’18) took ceramics as another outlet for his art besides painting and drawing and thought it was cool to be able to make his own stuff through sculpting and throwing. While a teaching assistant, he was able to learn how to make sure a piece wasn’t too cold or wet to enter the kiln along with checking for any glaze on the bottom.

Mr. Boriskin was able to teach Miles to not rush things and to really take time and focus on an individual project.

“In ceramics you don’t have to make the biggest or craziest things. Even if it’s small and meaningful to you, then that’s all that matters,” Mile says. “In life, everyone is always stressing and it’s good to stop and see the small things.”

Mr. Boriskin’s catchphrase  “no mistakes, only happy accidents” is a prime example of his eccentric attitude on life that radiates throughout the Christian Brothers campus. Having such a bright figure helps the students find joy in their artistic ability along with giving a healthy outlet to stress.  He is always trying to innovate the class to make it the best environment for the students by doing extra surveys, attending professional classes, and going above and beyond in the classroom. Talking and being in the presence of Mr. Boriskin is always a delight. Whether it be about ceramics or life, he is a great role model in our CB community.