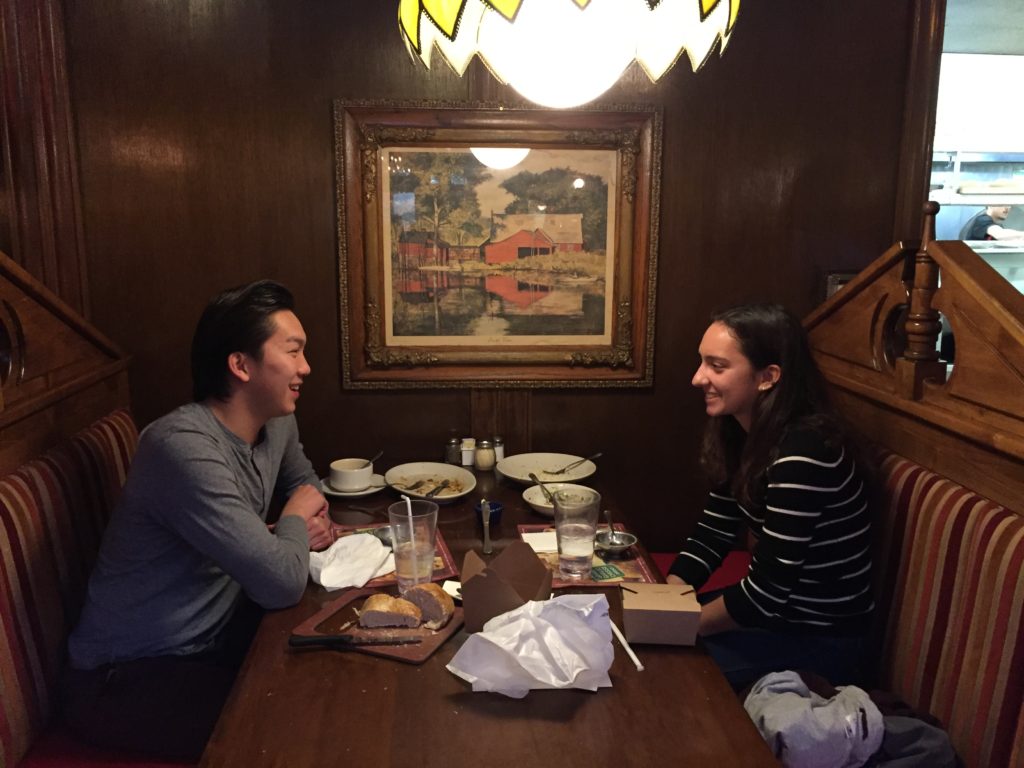 Michaela: As much fun as I had participating in the last TBD, I’m glad to resume my rightful place as matchmaker. Not that I harbor any resentment against my replacement Delaney Bird (‘18) or the back-stabbing replacer Alex, but we all knew that it was time for Ms. Bird to fly away from the TBD scene.

Alex: To be frank, Michaela and Delaney are both difficult to work with. Everyone uses me as a scapegoat, meanwhile taking all of the credit for our program’s wild success. The Talon is truly lucky to have a dedicated writer like myself to carry the weight of such an intensive and thankless program.

Regardless, I’m glad that Michaela is back on the planning side of the date. The last blind date wasn’t as successful as the Talon had hoped. Earlier this semester, Michaela told us she forgot Sam’s name during their blind date itself! With her newfound experience, I hope she can help the TBD team avoid previous mistakes and create a more memorable encounter.

Michaela: Ummm… I’d like to call out some fake news here.We both know who really does the heavy lifting in Talon, and if you can’t take my word for it, I kindly direct you to ask any other member of the Talon class, including, and perhaps especially, the instructor.

Anyhow, for this round, we decided to choose one of the most iconic date scenes of all time: a classic game of miniature golf. And to top things off, we also went to the Old Spaghetti Factory next door for a classic bowl of post-golf Italian-style pasta.

Alex: Mini golf may be a classic date, but the TBD decided to mix things up by sending our couple to Monster Mini-Golf. Imagine a typical mini golf course, but now it’s indoors, dimly lit, and in the back of a strip mall with little children running around. Perhaps not the most traditional date spot, but then again, bringing two other people to your date probably isn’t very normal either. 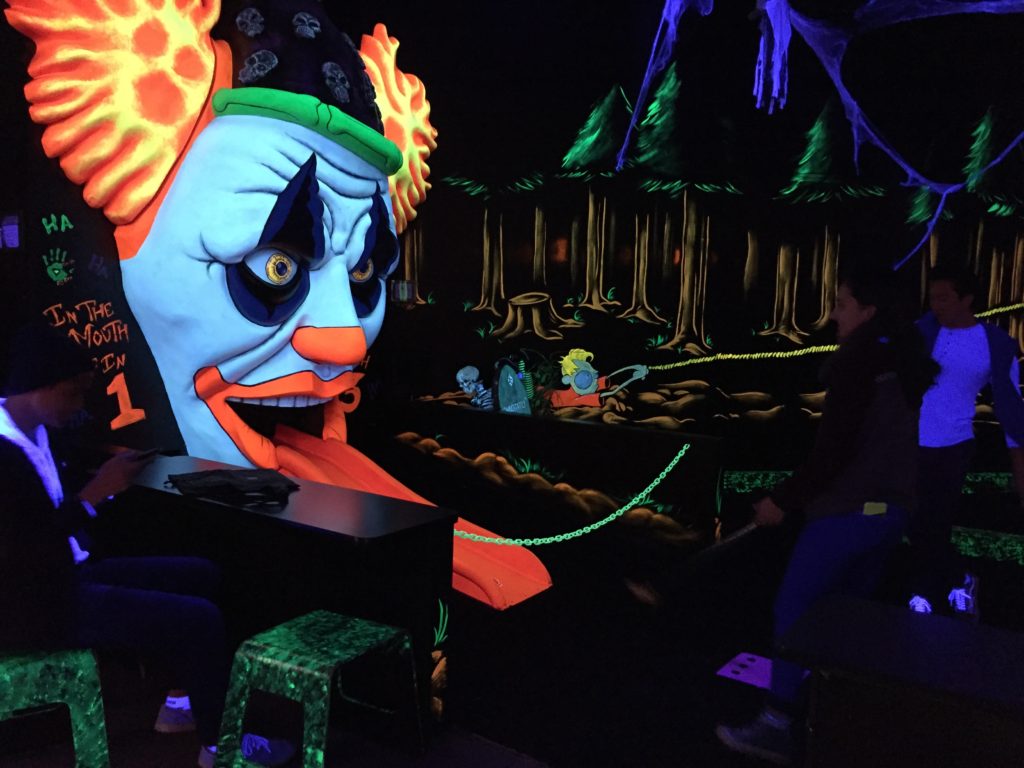 For those of you afraid of clowns, please enjoy this photo from inside the glow-in-the-dark Monster course.

Michaela: Due to the lack of mini golfing places around town, most of the Sacramentans involved in this date had quite a hike out to my neck of the woods, the Fair Oaks/Rancho Cordova area, on this fine Sunday morning. On the way to mini golf, Andy had plenty of time to wonder how the game would go, and perhaps more importantly, who would be his playing partner.

“I’m kinda nervous, not gonna lie,” he confessed. “I think it’s gonna be fun. I don’t really have any expectations going into it; it’s just going to be a cool hangout/get-to-know-you thing.”

Andy classifies himself as an extrovert, and admitted that he expected at least to know his date, even if the two weren’t particularly close.

“I think there’s a really really high chance that I know them. The chance that I’m friends with them? Not as high. I would think I know a decent amount of people at CB.”

Alex: Quite the opposite of Andy, Julia classifies herself as “definitely [an] introvert,” and was much less sure of knowing who her date was.

“I’m sure I’ve seen him around school,” she texts me. “I just hope that I know his name.”

Our Talon team knew that Andy and Julia were quite unalike, yet we never anticipated such a difference between the two. Admittedly, Michaela and I were a little nervous about how the date would go. Additionally, I think it’s important to mention that despite living closer than Andy and I do to the venue, the girls arrived much later than we did. I don’t know what they were doing, but rest assured, Alex was not the late one this time.

Michaela: To be fair, I still arrived at mini golf plenty early. Someone, not gonna name names, got the timing wrong and showed up ridiculously early, even after making his mom stop en route for breakfast to kill time. This turn of events was pretty refreshing, though, considering that Alex was late to the last TBD and missed the introduction he was supposed to facilitate.

When we finally introduced the two blind-date-goers, they seemed to know each other, at least somewhat. Julia immediately recognized Andy, who rejoiced upon remembering his date’s name after a brief moment of doubt. Alex and I sat down amidst the monster-themed decor and black lights to watch the golf.

Alex: Due to the layout of the golfing area and lack of light, it was quite difficult to see our couple. Still, they seemed to be having a good time and Michaela and I could occasionally hear some laughter. The TBD Team was actually a little blindsided by how quickly our couple finished. We had never actually golfed at Monster Mini-golf and didn’t realize that our couple would emerge in under 40 minutes.

“I’m not sure how we finished so quickly,” Julia said. “We were pretty bad.”

Michaela: Once the game had come to a close, we caught up with the golfers for a recap on the game.

“We both [stunk], but it was fun,” Andy confessed. “I thought it was a good option to go on a date with because it’s not like a movie where you just sit there and do nothing. You actually have to make conversation, and I really liked that aspect of it.”

Lacking in mini golf experience myself, I can’t personally attest to how well or poorly our golfers played, but they certainly seemed to be evenly matched. We watched their graceful final strokes from the sidelines, and I also watched Alex direct them where to stand so that the photos would look more “candid”. 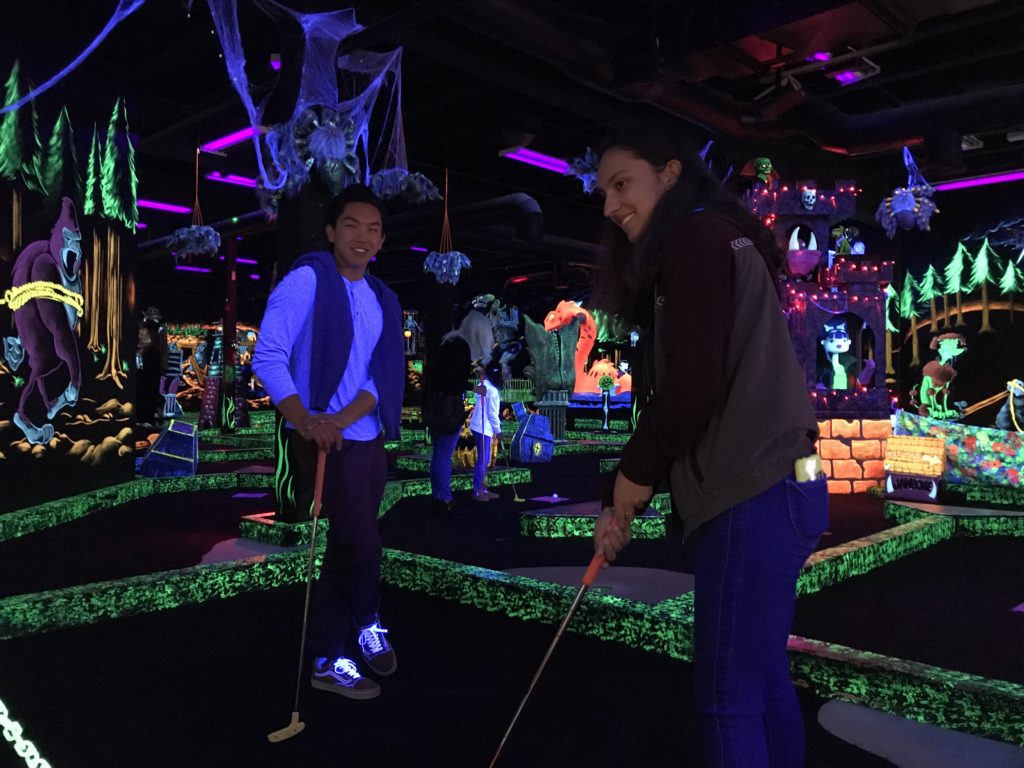 Andy and Julia in their “candid” pose, as meticulously organized by Alex.

Alex: In my defense, our two daters needed much help in the photo-taking department. The golf course was dark and they would always block each other in the photos. Even with my instruction, our pics still turned out a bit funny. In spite of these documenting challenges, Julia also attests to a having a great time golfing.

“Golfing was fun. We had a surprising amount of things to talk about,” she said. “I’m glad neither of us were particularly good. It would have been bad if one of us was good and the other wasn’t.”

Michaela: Alex and I next escorted our blind couple to their table for two at the Old Spaghetti Factory next door. Actually, the sassy host escorted them after we explained to him why our group of four needed two separate, adjacent tables. As though requiring an explanation were not enough, the same fellow returned to our table and assured us that although we were journalists and he was an athlete in high school, he was a “smart jock,” and could thus communicate with us.

Alex: Michaela had asked our host for a photo to put in the article, but he laughed at us and declined. Despite this rude refusal, he kept awkwardly walking past our table, obviously wanting to have his photo taken. He even checked in on Andy and Julia in order to creep around us longer. Michaela and I were a little weirded out, but our couple was too enthralled with each other to notice anything.

Michaela: As we sat at a table behind Andy and Julia, Alex and I overheard bits and pieces of their lively chatter. Three courses of Italian grub and still there never seemed to be a dull moment!

“I don’t think it was ever really awkward,” Andy said. “It was quiet at the beginning, but I don’t think we ran out of stuff to talk about. We both do sports, so sports people can kind of connect.”

Although Andy’s sports are all water-based and Julia’s all involve running, the two athletes must have paced the date pretty well, since they never ran (or swam) out of things to say. We didn’t have blue ribbons, trophies, or anything else to congratulate them, but nothing says “winners” like a free meal and making a new friend on campus.

Alex: I disagree. If a dedicated athlete wins the Olympics and is promptly awarded a free meal and a friend, I think he’s still gonna want a gold medal. Anyhow, these two did seem to get along nicely. I took some pictures through a peephole between our booths, and Michaela caught me on tape snapping those photos. 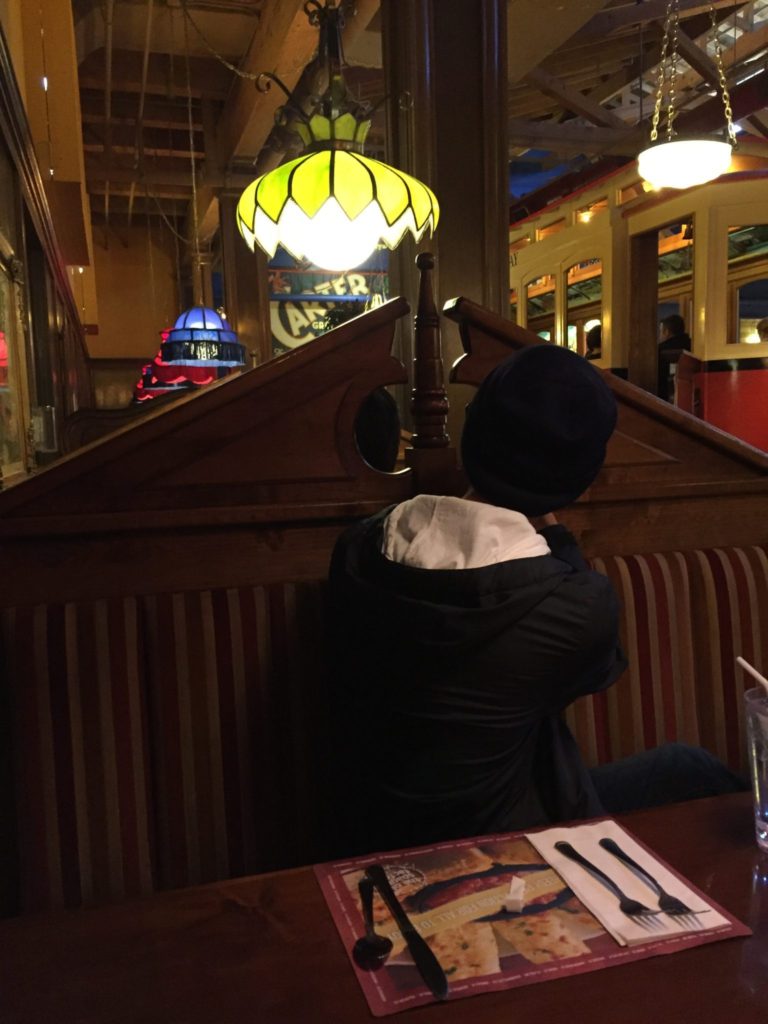 Alex casually snapping some photos of our blind couple in the adjacent booth.

Michaela: After the ice cream, we met up with our blind couple to review how the date went.

“It was great,” Andy began. “I thought it was really fun. I was a little bit nervous at first, but then it smoothed out and it was great.”

Andy’s words capture the vibe of the date pretty perfectly. From what we could overhear, both parties seemed to be learning a lot about each other and enjoying some genuine conversation. When asked if he had any comments on any aspect of the afternoon, Andy wanted nothing more than to pay a compliment to his partner.

“Julia’s great. She’s a nice girl and I thought we hit it off really well.”

Alex: I know that Julia wasn’t sure about how the afternoon would unfold, but after the fact, she seemed pleased with the result. 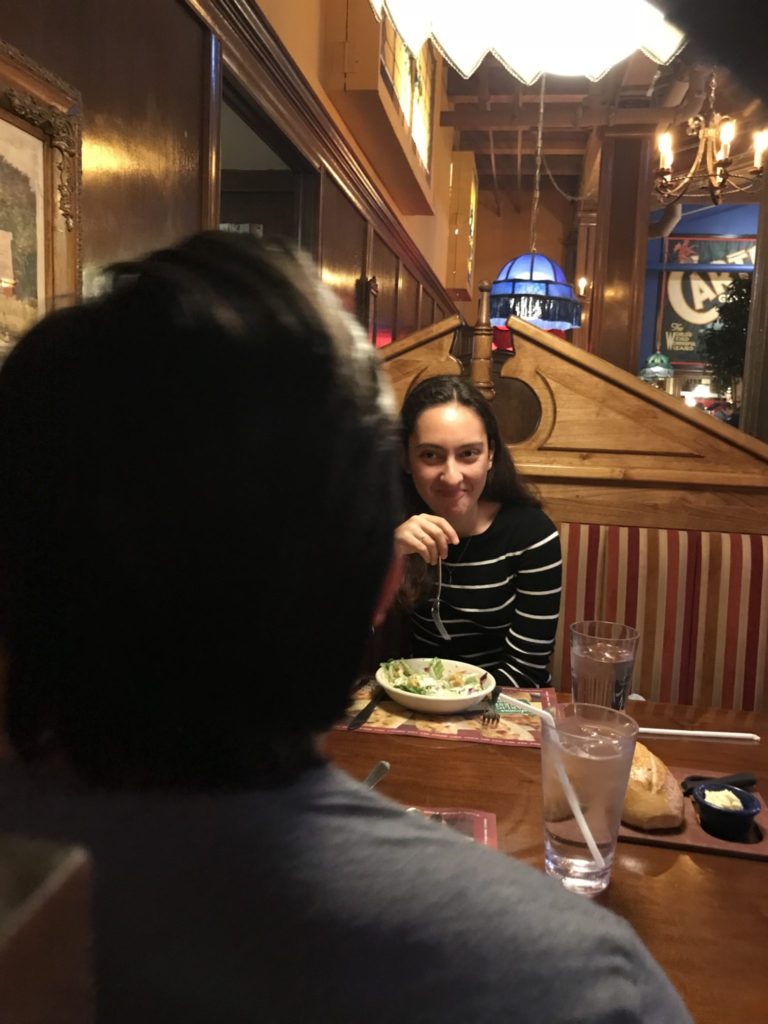 The grand product of Alex’s spy work: the back of Andy’s head and Julia pretending not to notice the camera.

“I thought it was pretty cool. And now I know one of my classmates a little better.

Michaela: Just in case our series of Talon Blind Dates has inspired any of our readers to match up some friends or to participate on their own blind date, Andy has some words of advice.

“I would recommend [going on a blind date], but I would say that you have to know yourself pretty well,” he says. “If you’re pretty introverted, maybe prepare a little bit before hand with small talk and stuff like that to keep the awkwardness away.”

As an extrovert, Andy didn’t seem to have any problem keeping the conversation going, but his words ring true for all those who tend to fall more on the shy side. As a “veteran” of blind dating myself, I echo Andy’s suggestion, but also advise that you don’t let introversion keep you from testing the waters of a blind date experience.

Alex: From these last three blind dates, I’ve learned that people get along well when given an afternoon of free entertainment together.

But more seriously, when placed in uncomfortable situations, people seem to become more talkative. We’ve put some very different people together, yet there’s always been conversation and interaction. No one has ever just ignored the other person or clammed up because of the awkwardness. Such awkward moments connect people  in the moment, even if that relationship doesn’t always last after the date. So if awkwardness turns you off from blind dates or really anything you want to do, know that as long as you’re open to the experience, chances are you’ll have a good time.

In truly hypocritical fashion, I don’t think I would ever go on a blind date of my own. But it’s been fun planning them for other people. With a completely new Talon team next year, I hope that our blind date tradition continues, even after Michaela and I, the TBD entrepreneurs, graduate.