A Mission To Mexico 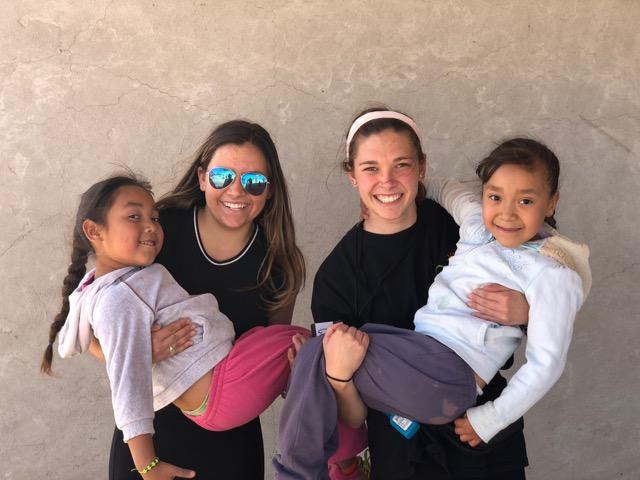 When people think of community service, they think of helping out at a food bank or working at a a homeless shelter. Some people think of community service as a chore, something they have to do to slap on their college transcripts. ere was a way to make community service more rewarding? That’s where mission trips come into the picture. With these trips, students have the opportunity to travel to other places and provide service, interact with the residents, and take a valuable piece of knowledge back home with them. Similar trips such as the ever-popular Venaver are offered here. But sisters Courtney (‘18) and Carly Krause (‘20) had their own plans in mind: they spent their past spring break in Mexico doing community service.

“I started getting involved in mission trips because my sister had been going on them for a while. This was her third trip that she had gone on through our local church the Granite Bay Bayside Church” Courtney explained . “She really wanted me to go on this last one with her. I decided to go on it because I figured it would be fun for us to do service and spend some time together. I didn’t really have any expectations or anything, I only knew the bare basics which is that we were staying in tents and working with kids all day.”

Upon arrival, Courtney was immediately put to work, straddled with a variety of tasks throughout the day.

“We would usually serve at a church, and there would be about thirty kids coming in every day, sometimes with their parents. We would spend the whole day with them, usually playing with the kids, and doing other stuff like arts and crafts and outdoor games.”

Still, an immersive experience such as this is bound to come with some drawbacks.

“We ended up sleeping in the middle of an alfalfa field,” Courtney said. “The tents had already been set up by volunteers the day before we got there. The worst part was probably the fact that we only got one shower during the whole time that we were there.”

But even as she braved the week, Courtney realized that being able to shower every day was a luxury as far as the citizens of Mexico are concerned.

“A lot of the houses around the church we worked at were in very poor condition. Some of the houses were just really simple shacks. A few were better than others, but there weren’t any paved roads and there was always dirt everywhere. There wasn’t even any furniture inside,and all of the floors were all concrete. Not all of the bathrooms worked when we were there.”

But both of the sisters agreed that this was a very profound experience, and they wouldn’t hesitate to go back.

“I think out of all of the mission trips I’ve done, this one was by far my favorite” said Carly. “The other trips we did work like painting houses, and this was the first one where I was actually able to interact with the people who lived there. I got to serve as God’s disciple and act as the hands and feet of Christ. I grew really strong relationships with them, and it was really hard when I had to leave them once the trip was over.”

“At the end of the day, I was always so exhausted and I wanted nothing more than to just lie down and go to sleep,” the sophomore added. “But then the Holy Spirit was in us, and it gave us a burst of energy when one more kid would ask us for a piggy back ride or needed help with arts and crafts. Being disconnected like that, without our phones or any distractions, it really allowed me to feel God’s presence even though we were in the middle of nowhere. I truly believe that I was brought closer to God.”

“This experience really taught me to be grateful for all of the opportunities that I have here” said Courtney. “The best part was meeting all the new people down there. We were separated into our own little groups to work, and everyone in my group was very friendly and we all opened up to each other. I’d like to be able to repeat this experience, although this time I would want to go to a different country so that I can experience the culture there.”

Wherever Courtney and Carly’s future mission trips may take them, we hope that her experience there can be as rewarding as the one she had in Mexico and she can bring that same positive energy to her home.