This March, about 40 students from Christian Brothers traveled to Nashville, TN to compete at the STN Convention. STN, or Student Television Network, is a nationwide competition for students interested in media and journalism. There are a plethora of competitions ranging from small 60 second advertisements to full news broadcasts. The most competitive of these […] 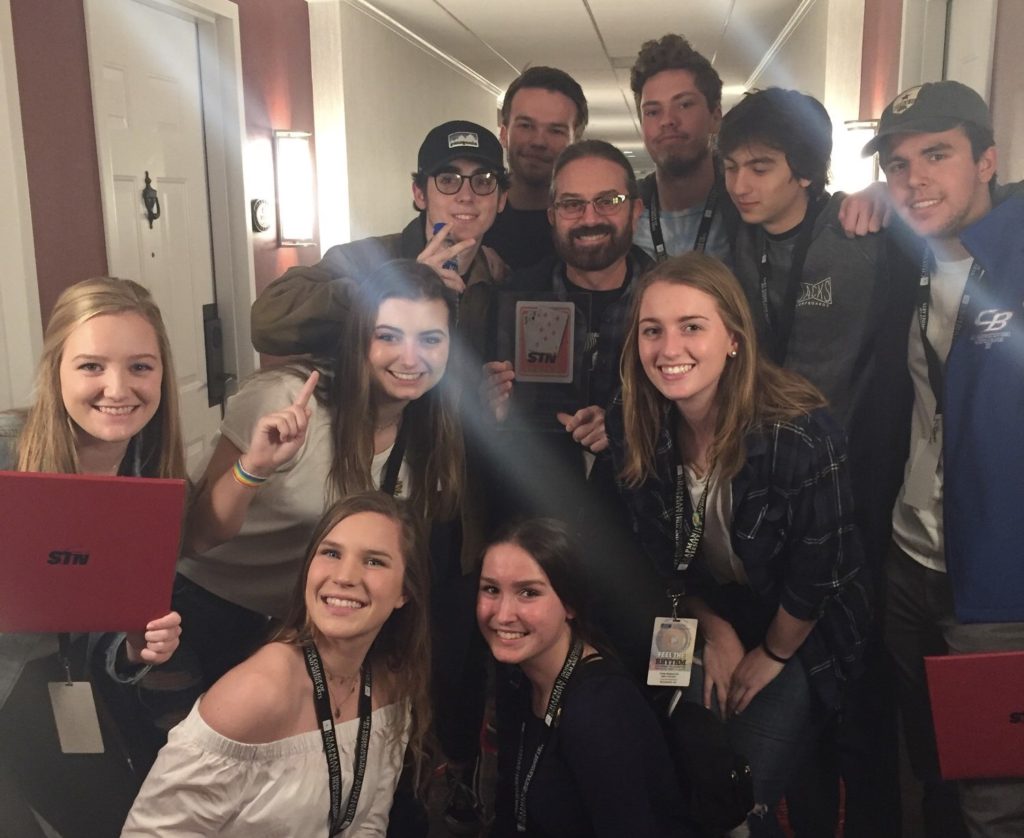 This March, about 40 students from Christian Brothers traveled to Nashville, TN to compete at the STN Convention. STN, or Student Television Network, is a nationwide competition for students interested in media and journalism. There are a plethora of competitions ranging from small 60 second advertisements to full news broadcasts. The most competitive of these is Crazy 8’s.

For the Crazy 8’s Short Film competition, we had eight hours to write and produce a short film following a prompt given to us that morning. To put it simply, it was a challenge. Here is an hour by hour summary of the competition, and how we fought for 2nd place.

Madeleine Molitor (‘18) and Christian Groen (‘18) sprint back from receiving our prompt for the short film: Stuck On Repeat. We gather in Nick Smith’s (‘18) room and begin brainstorming. Our first idea was creating a film where we break the fourth wall or talk to the audience watching. But we quickly realized that idea had little emotional appeal, a quality found in the previous winners of this competition. After throwing out a few ideas, Christian came up with a brilliant plot.

“We should try to do a Black Mirror-type film where the audience is confused until the very end and then everything comes together.”

And with suggestions from just about every member of the group, we land the perfect story. A video game character’s struggle of living on repeat.

Christian and I began constructing a script, specifically the voice overs for the “star” of the film, Jon Berkley (‘18). We wanted Jon to sound calm and collected in the beginning, but panicked as the film progressed. Riley Schanberger (‘18) spent his time researching the perfect music to create an eerie vibe. With the help of Anna Clare Nelson (‘18) and Madeleine, the set was ready and we could finally start filming.

Director of Photography Max Dunn(‘18), had to educate himself on how to use a camera stabilizer, which is trickier than it sounds. The shot of Jon walking up and opening the curtains was the first shot we filmed and took about 30 minutes to shoot. Max’s eye along with Christian’s directing lead to some of the most beautiful shots I’ve ever seen. The hardest part of filming this scene was definitely the lighting in the shot. Max had to figure out how open the curtains should be and which lamps should be on. We ended up partly opening up the curtains and turning all lights off so that the lighting was a cool blue instead of yellow from the artificial lighting in the room.

We all started to freak out during hour four. We realized we were half way through our allotted  time and only about a quarter through filming, and we still needed to edit. So we split into teams: Riley and Christian decided to take what shots we had and start editing while Max, Anna Clare, Madeleine, Emily Shepard (‘18), Mary Kate Monnat (‘18), and I finished filming.

HOUR FIVE: The Calm Before The Storm

As we wrapped up filming, Jon recorded his voiceovers. Since he’s comfortable recording his voice for the Talon Talk podcast, it went pretty smoothly. Christian and Riley continued editing while we all just sat in the hotel room watching them work their magic.

After watching the boys edit for about 20 minutes, we realized some of the footage was not as good as we had hoped. So Jon, Max, Anna Clare, Madeleine, and I decided to go and re-shoot some shots. We re-did the scene of Jon getting out of bed and filmed Jon at the gym. Nick and Anna Clare starred as the park kids in the final scene where it’s exposed that Jon is a video game character.

When we returned to hotel room where Riley and Christian were editing we immediately handed them the SD card with the new shots. The boys split up the film so Riley edited the first half and Christian edited the second. But something happened. Somehow the computer with the second half crashed, but luckily it had been saved about 20 minutes earlier.

Sadly, the final scene of the park kids playing the video game was lost, so the editors had to quickly re-edit it. The entire room was tense and silent as we watched them work quickly to finish the film. Christian applied the perfect filters to give the film a blue grey tone that gave the film a creepy feeling. We ran as a team to the table where we turned on our film and cheered.

As we listened to the announcers call out other schools for first and second honorable mentions and third place, all of our hearts started racing. Then it happened!

Hearing the announcers call out Christian Brothers High School was the most rewarding feeling any of of had ever felt. We all jumped out of our seats and hugged each other while the boys ran up to receive the reward. This is the first time CB has ever placed in a Crazy 8’s competition, and we couldn’t be more proud of what we created as a team.

“It was very rewarding,” Madeleine says. “Especially after all the work we have put into video making the last three years of KBFT. It was incredible to know that the video we worked so hard on placed second!”