You are here: Home \ Community \ Featured Posts \ Called To Be Bald
Community
0

Called To Be Bald

The St. Baldrick’s fundraiser has just passed — maybe you’ve seen the after-effects of the night. AKA baldies for a cause! A few of CB’s own students and teachers participated in this awesome event. The fundraiser encourages people to set an amount of money to try and raise and then shave their head. The money […] 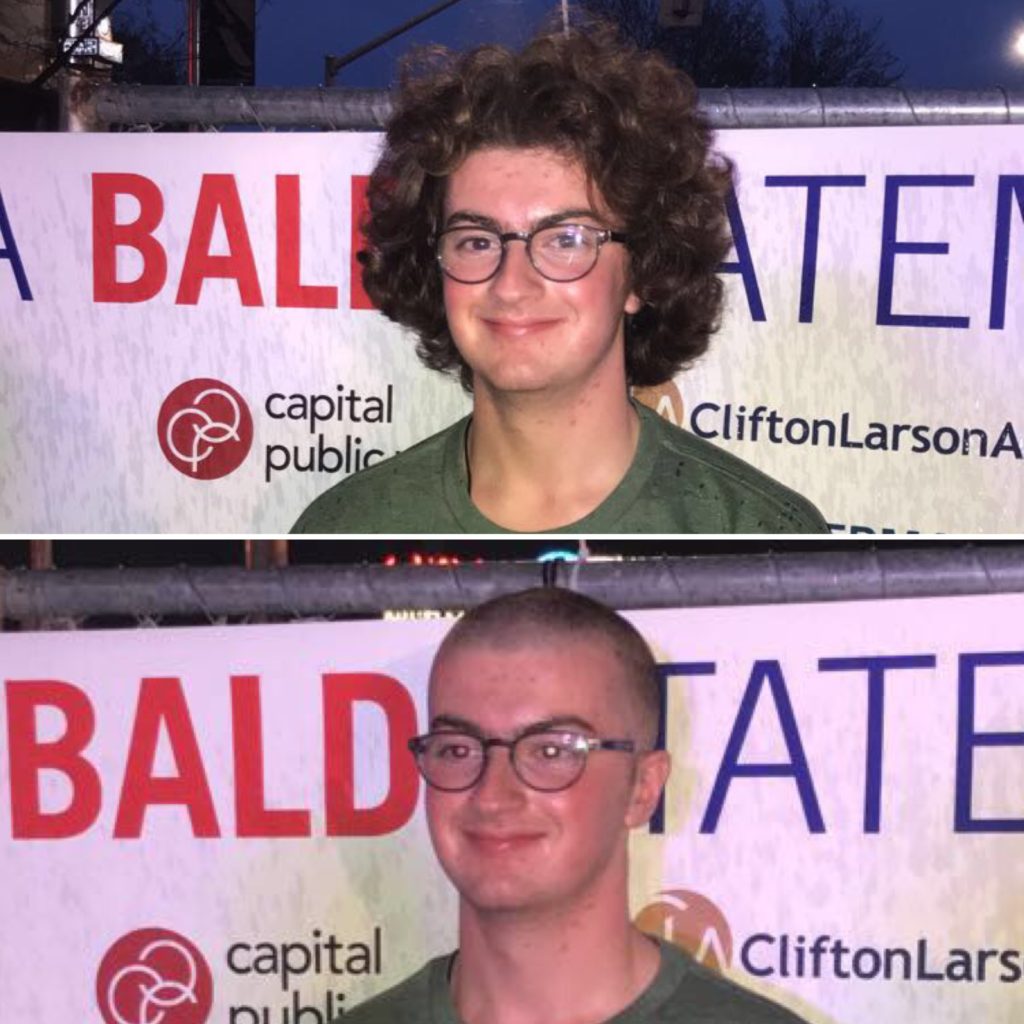 The St. Baldrick’s fundraiser has just passed — maybe you’ve seen the after-effects of the night. AKA baldies for a cause! A few of CB’s own students and teachers participated in this awesome event. The fundraiser encourages people to set an amount of money to try and raise and then shave their head. The money goes to cancer research, and they shave their heads in support of cancer patients. Some girls with long hair even donate ten or more inches to Locks of Love, a public non-profit organization that provides hairpieces to financially disadvantaged children in the [US] suffering from long-term medical hair loss from any diagnosis.

This year, I had the chance to go to the event on March 12 at de Vere’s Irish Pub downtown, which is owned by a few Christian Brothers graduates. A rainy evening put no damper on all the fun. The street was blocked off with cop cars and short walls that you couldn’t see over. I walked in to find Aaron Davis (’18), whom I had come to support. Throwback music was blasting, lights were flashing, and everyone looked so excited to donate to such a great cause. There was even a photo booth full of St. Patrick’s Day props.

We watched person after person walk onto the stage and plop down into a seat, ready to say goodbye to their hair. But nobody looked sad. They all knew it was going to such a great cause.

One man had an amazing handlebar mustache. Originally, he wasn’t planning on shaving it — he wanted to just shave his head. But somehow the emcee, Patrick Harbison (’97), persuaded him to agree to shaving it if they raised $1,000 right then and there. “How can they possibly raise that much in five minutes?” I thought.

I turned around to have a conversation with Aaron, Nick Smith (’18), and Sierra Martin (’18), who were there to support Aaron as well, but quickly whipped around again when I heard they were already at $150. One guy pulled a $100 bill out of his pocket. Another gave $50. “We’re up to $650!” the emcee shouted excitedly.

Pretty soon they had raised the $1,000. Everyone cheered the man on as the woman shaved his beautiful mustache. He looked proud. I got chills as I watched people so selflessly shave their heads for the cause. 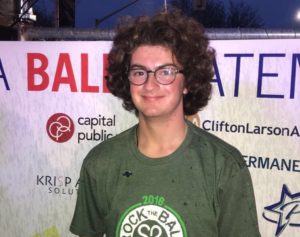 To get some more information on the fundraiser, I talked to Aaron, who has participated since he was ten years old. He kind of laughed, adding that it was almost an out-of-the-blue decision.

Aaron started his fundraising efforts around a month before March 12, the day of the event.

“I think I’ve met my goal every time. [I’ve raised] around $6,000, total, I think.” When Aaron told me this, my jaw literally dropped. He looked proud of all the money he had raised to help those in need of treatment.

I asked Aaron how he felt when they shaved the first bit of hair off of his head, expecting him to say something inspiring, like “hopeful” or “satisfied.” But I was met with a different answer: “I feel really cold. Yeah, it’s a big weight off my head.”

“Actually, my hair is kind of annoying sometimes when it gets really long so I don’t really mind,” he added. “I feel really great and I feel like I can help someone, and, you know, that’s nice…I figure my hair is less important than helping people.” 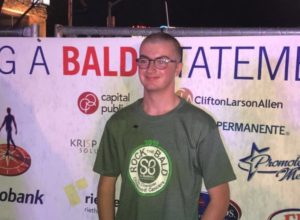 Aaron with a freshly-shaved head.

When asked if he would recommend the fundraiser to others, Aaron had three words: “Yes! Do it!”

Again expecting something deep and meaningful, I asked Aaron what the fundraiser represented. “It represents March. I always do it in March,” before adding that “it represents happiness.”

Speaking of Mr. Reel, I also got his take on the fundraiser.

“I did it for the first time seven years ago… Mr. Delgado was taking over the CB Baldies team that started eight or nine years ago.  So I was doing cross country with him and I was kinda like, ‘okay, I’ll do it too!'” He laughed but then regained seriousness.

Mr. Reel is passionate about this cause after having lost his father to cancer. “[We should do anything] we can do to fundraise for cancer research and help families and especially young kids who have to suffer with this–anything we can do to help them.”

“I’m trying to get some girls to do it– that’s the big money maker, especially if you start early– and there’s guys with very long hair that start and fundraise for well over a year, and they make ten or fifteen thousand dollars [each].” Mr. Reel sounded like he really wanted some new members to join CB’s team.

As for the advice he would give to anyone thinking of joining the fun next year, Mr. Reel thinks “the sweet spot for high school girls would probably be sophomore year, because then they could shave their hair, and let it all grow, and it would be back by upper division ball. Also with long hair you can coordinate with Locks of Love.”

Mr. Reel was modest about the amount of money he has raised for treatment. “I think over my lifespan I’ve raised a couple thousand dollars. I’m not as good as Aaron Davis– he’s really good at fundraising,” adding that he thinks the CB team has raised “somewhere around $20,000 total over eight or nine years.”

He had one more thing to add: “More people should do this! It’s really easy.”

I’m not sure I would describe shaving my head as “easy”, but this fundraiser is such an amazing opportunity to help those in need of treatment. Maybe if your hair is feeling a little heavy like Aaron’s gets, you can shave your head and join the cause. After all, as Mr. Reel put it, “we need some fresh scalps!”