Setting The Moot For Victory

Everyone knows the stress that accompanies a presentation in front of the whole class. What if you pronounce something wrong or forget what you’re supposed to say? Now imagine having to present in front of a panel of judges instead of just your friends and teachers. Oh, and they will interrupt you every so often […] 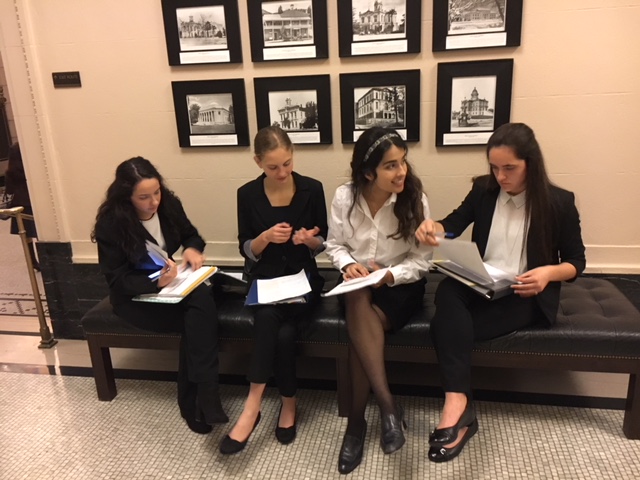 Everyone knows the stress that accompanies a presentation in front of the whole class. What if you pronounce something wrong or forget what you’re supposed to say? Now imagine having to present in front of a panel of judges instead of just your friends and teachers. Oh, and they will interrupt you every so often with questions designed to point out the weaker elements of your argument. This is just a small part of what we do on the Moot Court team.

Using Supreme Court precedents, each member must argue a different issue. This year, the issues dealt with whether or not a school could regulate speech by reason of bullying, if a student’s actions could be considered bullying according to a state statute, and whether or not the school’s actions (or lack thereof) were negligent.

This year Navneet Khaira (‘18), Sofia Linares (‘18), Michaela Cahill (‘18), and yours truly came out on top after three preliminary rounds, two semifinal rounds, and a final round.

While each of us could identify numerous factors that led to this victory, one of the most important may be that we all competed last year.

“It helped to see how the competition is done so that we didn’t go in blind, having no idea what to do,” Sofia explained. “ It also definitely helped to know what it’s like to be in front of a panel of real judges that are attacking your side. I feel like because our team was all people that were experienced, it really helped us get as far as we did.”

Though it was beneficial to have competed before, that by no means eliminated any of our nerves. An extra year of practice only meant that we had the formatting down. We still had to write entirely new arguments and learn the ins and outs of each of our issues.

“The hardest part was the fear before going into a competition,” Navneet shared. “It doesn’t matter if you spent ten hours in a row rehearsing your argument, a judge could rip down and penetrate any weak spot within the argument. I had to prepare a counterpoint to every single point that I brought up within my issue. Gigi would always go before me, and my hands would sweat profusely as I kept on looking at the timer. Those seven minutes that Gigi would present were a nightmare for me — I would try to get in some extra prep, but my mind would always wander.”

Despite the stress and anxiety each of us felt at various points throughout the competition, our hard work did pay off. After about four months of preparation, we did well enough to get to the finals and give the performance of a lifetime in front of three federal judges at the 3rd District Court of Appeals. 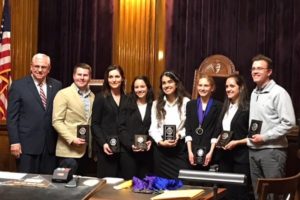 The team with our amazing coaches after being given the “super cool” plaques.

Though we knew we had done our best, as we waited to hear what the judges had to say, none of us were certain we would win.

“It was shocking to be honest,” Sofia shared, recalling how it felt to win. “Even though we worked hard and really wanted to win, the other team was very good. We were at the same level but they had the easier side. It’s not like a sport where you usually know who is going to win because you know the skill of both teams and how many points have been scored. Here, the judges ask questions and play devil’s advocate for both sides in order to avoid bias, so it was difficult to tell if the the judges liked our arguments.”

While it was difficult to know for sure what the results would be, we never gave up hope.

“We were literally praying at the table,” Michaela explained. “I was sitting next to Nav and she squeezed the circulation out of my hand when they made the announcement. We were all so excited, and we even got plaques, which was super cool!”

Winning first place was truly the icing on the cake of a two year moot court career. Countless late nights and case file rereads proved necessary and worthwhile when our names were called for first place. Though not every moment was filled with complete admiration for the law, it is undeniable that participating in this competition helped me become a better thinker, speaker, and debater.

The final verdict? Moot Court is a blast, especially when you win!