High school is a time of change and development for many students as they make the transition from eager young freshman to indifferent, foot-out-the-door seniors. Although these changes are often personal, many teachers across campus have the opportunity to watch their students mature between their appearance as fresh faces on campus and their final release […] 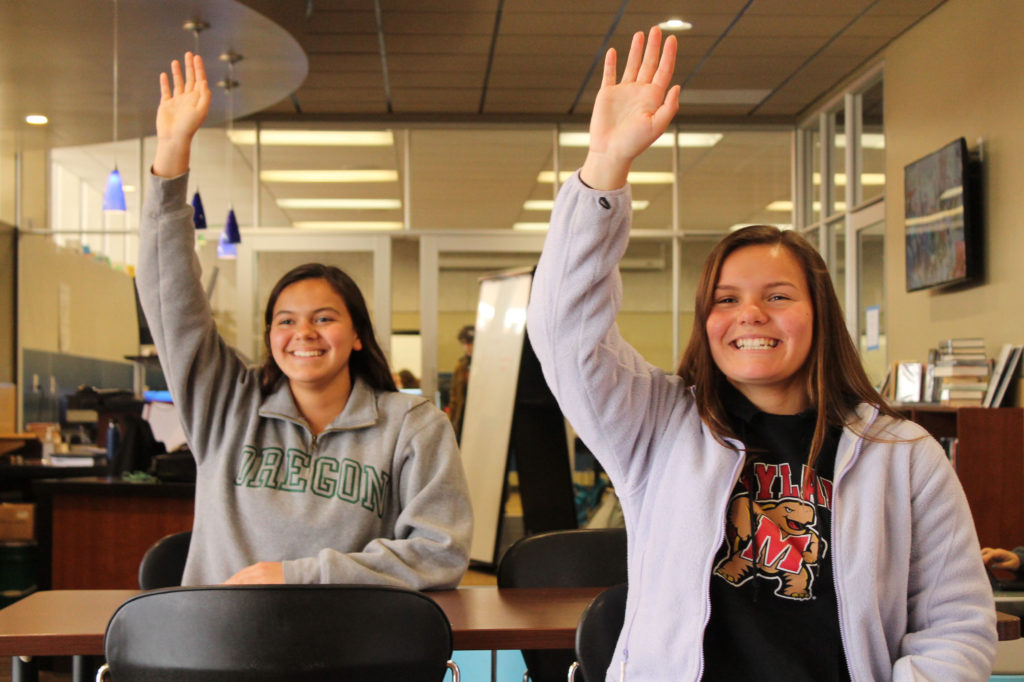 High school is a time of change and development for many students as they make the transition from eager young freshman to indifferent, foot-out-the-door seniors. Although these changes are often personal, many teachers across campus have the opportunity to watch their students mature between their appearance as fresh faces on campus and their final release into the big wide world.

In many of CB’s academic departments, one teacher will instruct an introductory-level course for underclassmen as well as an AP class for those who return to study the topic in more depth. This system invites teachers to watch how their students change — academically and socially — over several years in the high school atmosphere.

Ms. Marian Shackel, who teaches both accelerated freshmen and AP seniors, encounters returning students quite frequently and notes that there is “absolutely” a difference between her pupils in the two bookend grades of high school.

“Teaching the freshmen is a challenge because they come from so many different schools and the schools emphasize different things, so the job freshman year is to try to get everybody on the same page,” Ms. Shackel says. “Once students get to senior year, it’s amazing to see the growth.”

Because CB welcomes students from such a wide array of middle school campuses, Ms. Shackel has to get everyone rowing in the same direction and able to meet the expectations of the CB English department. Teaching AP students is a different challenge; most of them know the basics of writing fairly well, but May’s AP test presents added time pressure and heightens the importance of in-depth analysis.

“On one side I’ve got the psychic energy that I have to expend building relationships with freshmen,” she began. “And on the other I have to curb my frustrations [at] senioritis.”

Keeping a class of high schoolers focused is a challenge at any grade level, though Ms. Shackel notes the distinct contrast between freshmen, who often struggle with the transition into high school, and seniors, who pride themselves on a steady transition out of it. While she often creates games and jokes to appeal to the frosh, the experienced instructor knows that seniors can’t be swayed so easily.

Olivia Eliopoulos (‘18), one of Ms. Shackel’s current (and former) students, can testify to the undeniable change between her performance as a freshman student and a senior, especially when it comes to time management.

“[As freshmen] we had months to write one paper, and in senior year we’ve had [assignments] where it’s just one or two nights to write a paper,” she said. “In freshman year I would not have been able to do that. As a senior it’s kind of rough, but it’s always doable.”

Yet English is not the only subject where Olivia has returned for another round with the same teacher. She has also had Mr. Tom English twice, Mrs. Nicole Brousseau three times, and Mr. Steve Liu for an astounding four years in a row. These repetitive interactions have allowed Olivia to grow close with many instructors on campus and create inside jokes with some of those who know her best.

“Mr. English [and I] have a running joke that I hate cats — I definitely love cats — but I prayed for my cat once freshman year and he’s never let it go,” she said, laughing. “This year I had him as a senior for a week for Ms. Shackel’s class and he mentioned that I hate cats, so it’s always been our thing.”

Having a running joke with a teacher is definitely one of the benefits of having a small and close-knit campus. As Olivia points out, another advantage to having an AP teacher for a second time is getting to know his or her classroom dynamic before adding in the pressure of a college-level workload.

“For example with Ms. Brousseau, having her for accelerated bio and I actually had her for chemistry too I got to know what she likes and doesn’t like,” the science-loving senior explained. ”Once you’re in AP, there’s no room for error in what you do or how you act in class, so I think it definitely helps to have a precedent to be able to succeed in AP.”

This dynamic between students and teachers does not only apply at the AP level. In several other departments, including the religion department, one instructor teaches students from multiple age groups. Like Ms. Shackel, Mr. Julian Elorduy often notes how his students change over their years at CB.

“It’s more about maturity and personality growth that I notice, rather than skills,” he says.

As a religion teacher, Mr. Elorduy has an rather unique experience when it comes to seeing the personality of his students. His courses often entail personal reflections and individualized projects that allow him a glimpse into students’ perceptions, which often alter year to year. All the same, Mr. Elorduy does recognize some academic differences between his lower and upper division students.

“Both ages — sophomores and seniors — have blessings to them and also challenges. Sophomores are much more eager to engage in material than seniors, who are checking out a bit, but [at the] senior level, we can get some really good conversations going and some really high-level thinking.”

Between coursework and motivational focus, neither class is perfect. Both age groups have their benefits, yet both also present challenges that test their teachers’ patience significantly.

CB instructors who choose to teach multiple different classes often have to switch quickly between their strategies to instruct and guide younger students and keep the older ones on task. Yet the longer-term relationships this system fosters is nonetheless invaluable in terms of the time saved learning new classroom etiquette, the relationships forged, and the inside jokes that never grow old.