A Comprehensive Guide To Long-Term Absences

Did you just return from Kairos, STN, or Venaver? Have you spent the past week lying in bed with an unbearable fever? Are you currently relaxing on a family vacation? Are you unable to leave your house right now because you’re recovering from an injury? If you answered “yes” to any of these questions, that […] 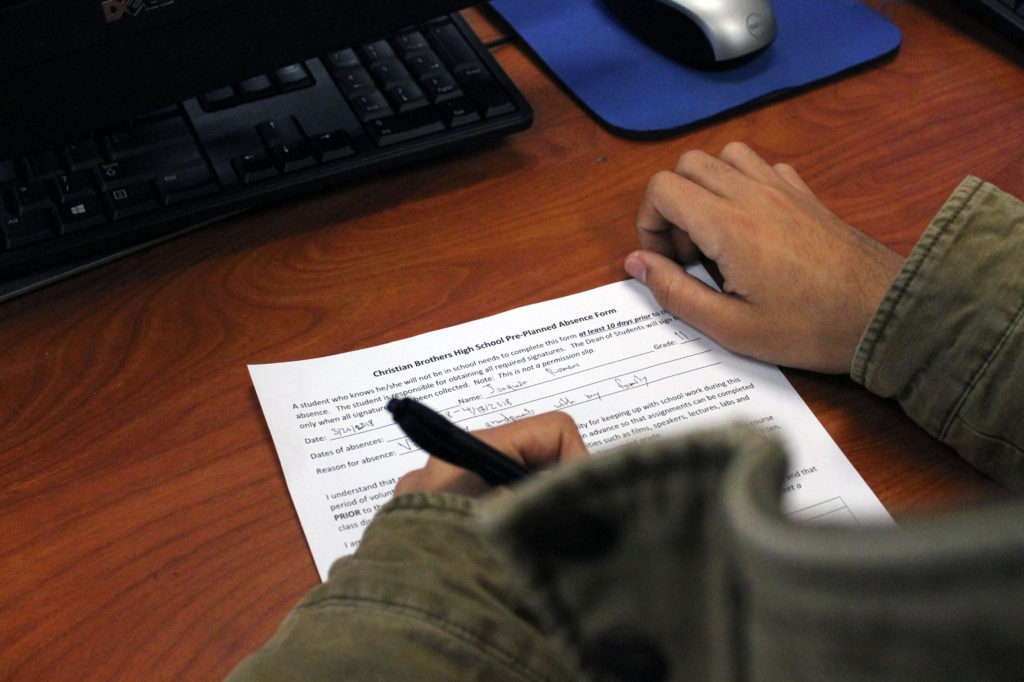 Did you just return from Kairos, STN, or Venaver? Have you spent the past week lying in bed with an unbearable fever? Are you currently relaxing on a family vacation? Are you unable to leave your house right now because you’re recovering from an injury?

If you answered “yes” to any of these questions, that means you’re missing school for a long period of time right now, and you’re going to face some challenges when you return.

But you don’t have to fall behind. With this comprehensive guide to dealing with extended absences, you’ll know exactly what you need to do to keep up with Christian Brothers High School’s fast-paced, challenging environment upon your return.

If you’re skeptical of my qualifications, don’t worry. This guide is based off advice from long-term absence experts Mrs. Cecilia Powers and Alice Wong (‘18). As a Co-Dean of Students, Mrs. Powers has ample experience working with students who have returned from extended absences. And Alice is basically the queen of concussions: she’s suffered not one, not two, but three of them since seventh grade, her most recent one being the result of an elbow to the head during a basketball game (at least, that’s what she thinks happened — she admits that her memory of the incident is a bit shaky).

So without further adieu, here’s what you need to do to make your return from an extended absence as smooth as possible:

0. If you know you’re going on a trip, fill out a Pre-Planned Absence Form.

Obviously, if you’re absent right now, this advice isn’t exactly helpful, and I apologize if I’m just rubbing salt in the wound. But if you’re planning on missing school to take a vacation with your family or participate in an activity that isn’t school-related, this step is essential. According to Mrs. Powers, this simple action can save students a lot of hassle.

“Sometimes, students know they’re going to be gone for a family reason or a personal trip or some activity that is not connected to school, and we always excuse those absences if we have communication in advance,” she explained. “So we really want to reiterate to students to take responsibility and complete a Pre-Planned Absence Form and talk to each of their teachers, turn it in to the Dean’s Office so we can plan for that absence, excuse that absence, and put it on the calendar, on PowerSchool in advance.”

This may seem obvious, but it’s a lot easier said than done. Returning from an extended absence means making up tests, catching up on homework assignments, and finding a way to learn class material on your own time. However, no matter how stressful potential conversations with teachers may be, students should initiate them immediately upon returning.

“Talk to your teachers. Communicate. Ask for help,” Mrs. Powers advised. “Be proactive in reaching out, because teachers want to hear from their students who have been gone. . . .They want them to be successful in class, so if students come to them proactively and as quickly as possible, teachers will help them, but if they sort of ignore them and avoid going to teachers because they think it’s gonna be a hard conversation, they’re missing out.”

Alice found communicating with teachers and counselors to be extremely helpful. She was able to drop her chemistry class in favor of a period of study hall and take chemistry in the summer instead, and most of her teachers were willing to excuse some assignments. To be sure, exceptions of this degree are only granted in extreme cases, but they’re perfect examples of teachers’ and counselors’ willingness to work with students returning from long-term absences.

Obviously, when you return from an extended absence, you’re going to have to put quite a bit more effort into school than if the absence hadn’t occurred. But if you’ve just recovered from a sickness or a concussion, it’s going to be hard to jump right back into the seven-hour school day while handling a larger-than-normal workload. You might not be ready to handle a “get-all-your-work-done-as-soon-as-possible” approach — and that’s okay.

“If you’re not ready for test, just be honest with your teachers,” Alice explained. “They’ll probably give you extensions.”

According to the CB Parent/Student Handbook, students may lose credit for a class if they have more than 10 non-school-related absences (or 15 including school-trips) in a semester.

The reason for this policy is obvious: attendance is essential to students’ education at Christian Brothers High School. But the idea of revoking credit for a class because a student unexpectedly suffered an injury or an illness sounds unreasonable. Luckily, that’s far from the Deans’ intentions.

“We make all sorts of exceptions to [this policy], which is also an important part of being reasonable and flexible and understanding when students have serious health issues or special circumstances that we need to accommodate,” Mrs. Powers explained.

To request such an accommodation, students must submit a handwritten request to the Assistant Principal explaining the reasons for their absences.

So there you have it. If you’re returning from an extended absence, start talking to your teachers, and make sure you submit a handwritten request for credit to the Assistant Principal if necessary. As tempting as it may be to procrastinate by reading more Talon articles, you should get these things done as soon as possible.