Lent is perhaps the most important time in the Catholic liturgical year: a time of preparation, reflection, and for many, personal improvement. While some people choose a Lenten promise that involves taking on an extra daily task or devoting a little more time to God through prayer, others choose to forgo something they enjoy to remind […] 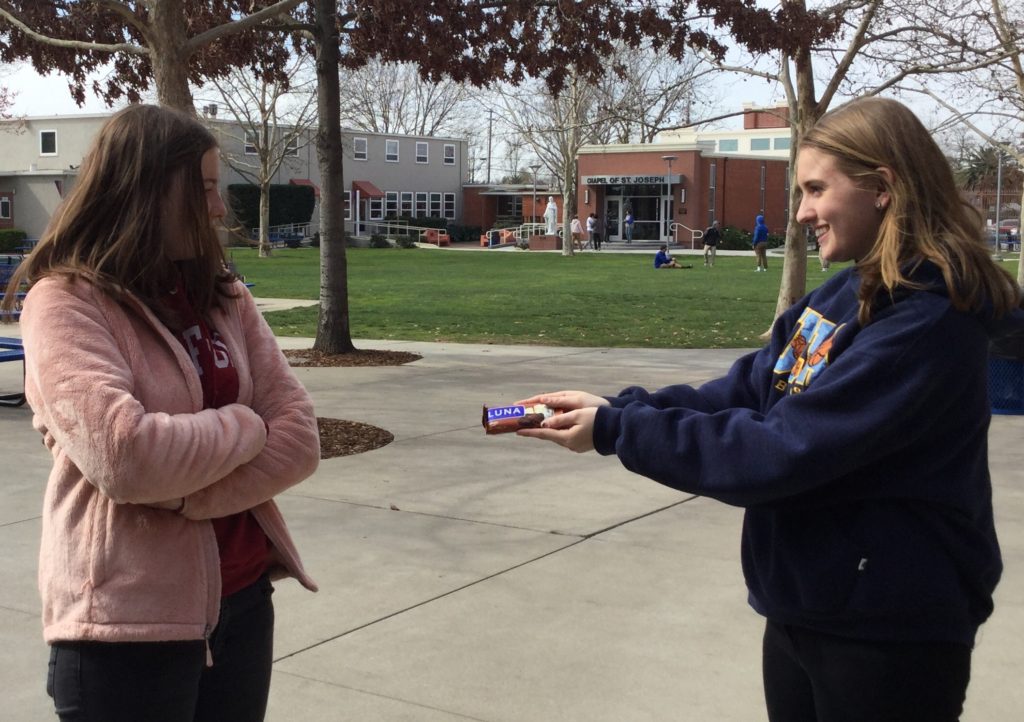 Lent is perhaps the most important time in the Catholic liturgical year: a time of preparation, reflection, and for many, personal improvement. While some people choose a Lenten promise that involves taking on an extra daily task or devoting a little more time to God through prayer, others choose to forgo something they enjoy to remind themselves of Christ’s sacrifice.

Chocolate, Netflix, and soda are among the most common things to give up during this sacred time, yet some people around CB made particularly interesting promises this year in the hopes of improving their character and faith life as well.

Take, for example, Jessie Yearwood (‘18), whose Lenten promise is to start each day with a bright and early work-out. For Jessie, making a sacrifice or taking up a healthful practice this Lent was a given.

“I was born and raised Catholic, so it’s kind of a tradition in my household,” she said.

Although Jessie is quite experienced in the art of Lenten promise-making, she admitted that finding the motivation to wake up at five A.M. and hit the gym is often difficult. In spite of this motivational challenge, the senior remains hopeful for the remaining weeks of Lent, especially based on her past experiences.

“It’s harder now because I just started doing it, but I think once I start doing it more it’ll become routine,” she began. “Another year I gave up texting and it wasn’t that bad… It sucked the first week, and after it got easier.”

According to Jessie, part of the beauty in making a promise is being able to test your limits and rely less on some of the amenities you takes for granted. “It makes you more aware of what you can actually do,” she noted.

Like Jessie, Regina Chapuis (‘18) has also created Lenten promises since childhood. Being raised in Catholic school has made the idea of going through Lent without making a sacrifice difficult for Regina to imagine.

“I make one because I think I’d feel guilty if I didn’t make one,” she admitted. “There’s this allotted time slot where I can do something.”

“It’s easier to commit to a forty day period of something than ‘I’m going to do this all year,’ which dies out pretty quickly,” Regina said, raising an important point about the length of time involved in making a Lenten promise. The difference between 365 days and 40 is significant in motivating people to make lifestyle changes.

This year, Regina chose to work on her time management by taking a break from something that many teens would find impossible to live without.

“I gave up social media,” she said. “I don’t do a lot of social media, but when I do, I do it for hours and it makes me really unproductive.”

Despite admitting that she relies on social media far less than many of her peers, the studious senior has nonetheless felt its absence.

“I guess I’ve noticed that when I’m bored I immediately try to click on something so that I can have a constant stream of information in my head.”

While giving up something like dessert certainly seems like a healthy choice, Regina’s chosen promise has the added benefit of free time that now exists where social media usage once resided. Like Regina, who began Lent with the hopes of procrastinating less, Mrs. Maureen Wanket also selected a promise designed to be challenging and to help her become her best self.

“I love the notion of self-improvement,” Ms. Wanket explained. “I love the idea of clarifying my relationship to God and to other people.”

Mrs. Wanket is well-versed in Lenten promise-making, but is trying something new this year.

“Every year I give up cursing I curse worse, and more creatively,” she confessed. This year, instead of exercising her creativity by cursing in exciting new ways, Ms. Wanket chose to exercise her listening ears.

“I gave up giving advice,” the English teacher said.

Giving up sharing advice is quite an interesting choice given Ms. Wanket’s chosen profession. Yet despite the seeming irony, this clever promise is personally meaningful and well-founded.

“Since I grew my hair out gray, people ask me advice a lot, and I’m not necessarily the best source of wisdom,” she said humbly. “It’s allowing me to be quiet and say, ‘Well, what do you think? What would you do?’ So far whenever I’ve said that, the person’s wisdom has been far better than mine.”

Although the insightful teacher admitted to breaking her Lenten promise a few times, she believes that not sharing advice has been helping her overall. Ms. Wanket views Lent as a time of working toward a goal and improving with God’s help; sometimes her chosen promises even extend beyond the 40 days.

“Last year I kept a Lenten practice of meditating and saying ten Hail Marys every morning, and then writing in my journal five things that I’m grateful for in the past 24 hours before plugging in to any kind of media,” the teacher explained. This Lenten promise proved so beneficial to Ms. Wanket in improving her overall mood that she quickly made it a way of life and continues to the present day.

Yet not all of the educator’s promises have had this level of success. One year she gave up sweets and felt their absence so forcefully that in the week before Lent she ate “every last bite” of the candy her seventh-grade daughter, who had made the same promise, had been saving from an early Easter gift.

“I have to be careful of the thing I give up because I want to do it more… That’s another reason [that] I thought that giving up giving advice was good, because it’s easy to replace it with being a better listener and just asking, ‘Well, what do you think? What would you do?’”

Despite denying her own wisdom, Ms. Wanket makes an important point about Lenten promises; it’s often easier to give up something that can be replaced with a better practice than to face the void that accompanies giving up something irreplaceable. (Keep in mind that there is no viable replacement for chocolate!)

The common practice aside, making a Lenten promises isn’t always about giving up your favorite snacks and sweets. Whether you take a few extra minutes for reflection, hit the gym every morning at five, or forgo offering advice in the name of self-improvement, remember that Lent is a time of personal growth. If you decide to do something in recognition of this special liturgical period, it should be personal to you.