Catching A Bite At The Breakfast Club

Mornings are the worst. No matter how hard you try, something always goes wrong. Your alarm doesn’t go off. The traffic on your way to school is unbearable. You’ve got three homework assignments to do before class because it was a whole lot easier last night to take a nice long nap then do anything […] 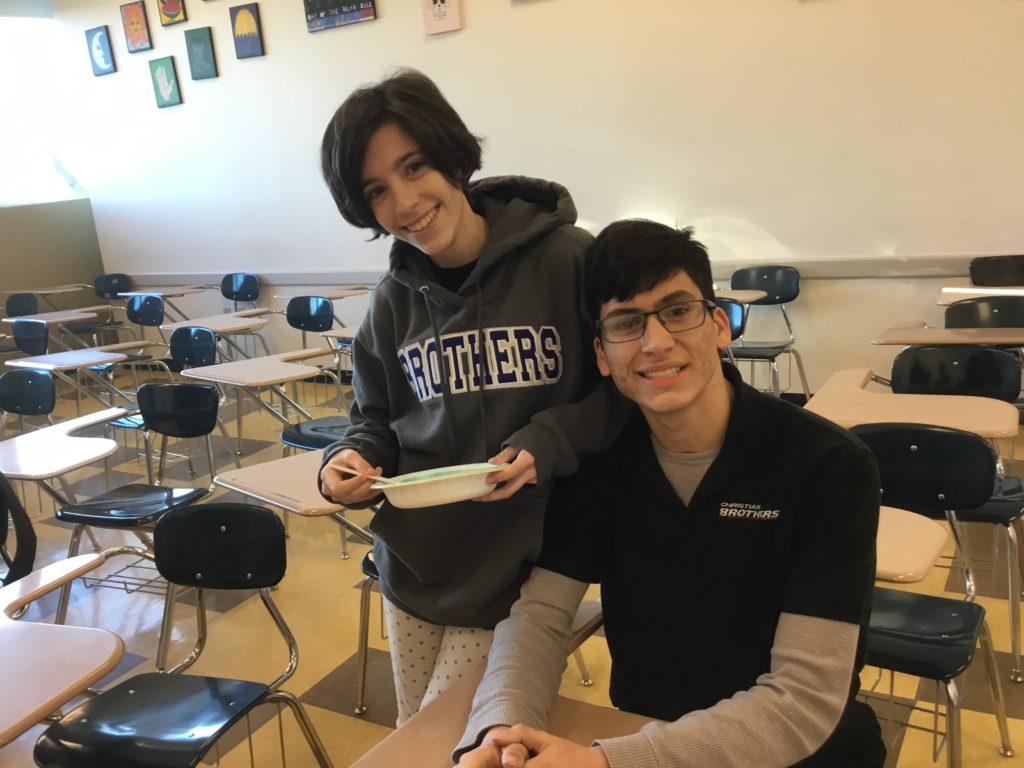 Mornings are the worst. No matter how hard you try, something always goes wrong. Your alarm doesn’t go off. The traffic on your way to school is unbearable. You’ve got three homework assignments to do before class because it was a whole lot easier last night to take a nice long nap then do anything related to school. But there’s one thing worse than anything else that can ruin not only your morning, but your day: not getting anything to eat for breakfast.

Luckily for you, one group of students has you covered.

The Breakfast Club, founded earlier this year by Madeline Madrid (’19), Nathan Battimarco (’19), and Tyler Chen (’19), is meant to help bring back the most important meal of the day. The club, which meets periodically in Ms. Chadbourne’s room (704), presents a welcoming community open to anyone who wants to share in breakfast. The mainstays of the club are cereal, milk, and coffee, a simple combination, which also serves as part of the club’s origin.

“I really like cereal, and Nathan really liked to make coffee, so we thought we would start a breakfast club. We thought it would be a lot of fun and that people would enjoy it,” Madeline says.

When asked what exactly a group of students sitting around in the mornings possibly could offer he rest of the CB community, Madeline’s answer is simple.

That may seem like a simple sentiment, but Madeline was quick to tell us that her club can provide a lot more than just a quick meal.

“We have friendship and companionship,” she adds. “Everyone is at Breakfast Club…and we all have to really come together. We have to orchestrate everything.”

Since funding for the club is scarce, a few devoted members will regularly pitch in to make the meetings happen. The presidents of the club normally communicate over a group message to make sure that the necessary supplies are bought and ready for each meeting, one misstep or forgetful moment and an entire meeting could be off.

Club member Simon Bell (’19) made known his appreciation for the most recent meeting (“It was nice”) and made sure to add that he had, in fact, contributed to the club.

“I brought the Cocoa Pebbles, I’ll have you know” he says.

Despite the amount of legwork that it takes to arrange each of the meet ups,  Madeline remains modest when it comes to the purported success of the club.

“[The club] has been moderately successful so far. We don’t really have many newcomers…but we do have the regular people who show up,” she says. But having been to various club meetings over the past semester, it seems that the Breakfast Club has succeeded in creating a niche for itself. While the folks that show up to sample the cereal and coffee are a small group, the meetings are surprisingly lively, and the atmosphere is certainly nonthreatening. People file in and out of the meetings throughout the hour before school starts and stop to talk. By no means does the breakfast club lack community, but as Madeline describes, the main thing attracting people to the club may just be the promise of free food.

“Not a lot of clubs offer free food. There’s a lot of people who get to school pretty early and they don’t really have anything to do in the morning, and me and my friends are a part of that. Another part of it is that a lot of teenagers don’t typically eat breakfast in the morning, so we’re providing the opportunity to do so.”

The Breakfast Club stands as a practical solution to an ever present problem in high school life. It presents a simple yet effective opportunity for students not only to meet each other early in the mornings, but to catch a quick bite to eat as well.