You are here: Home \ Falcon Sports \ Featured Posts \ Diving Into The Next Chapter
Falcon Sports
0

Diving Into The Next Chapter

After years of swimming as a Park Terrace Penguin and creating numerous YouTube videos teaching subscribers the art of gainer flips, Christian Brothers very own Owen Hunt (’18) is carrying on his talents on a college level for UC San Diego’s dive team. Having known Owen since kindergarten, I can attest to his fearlessness and […] 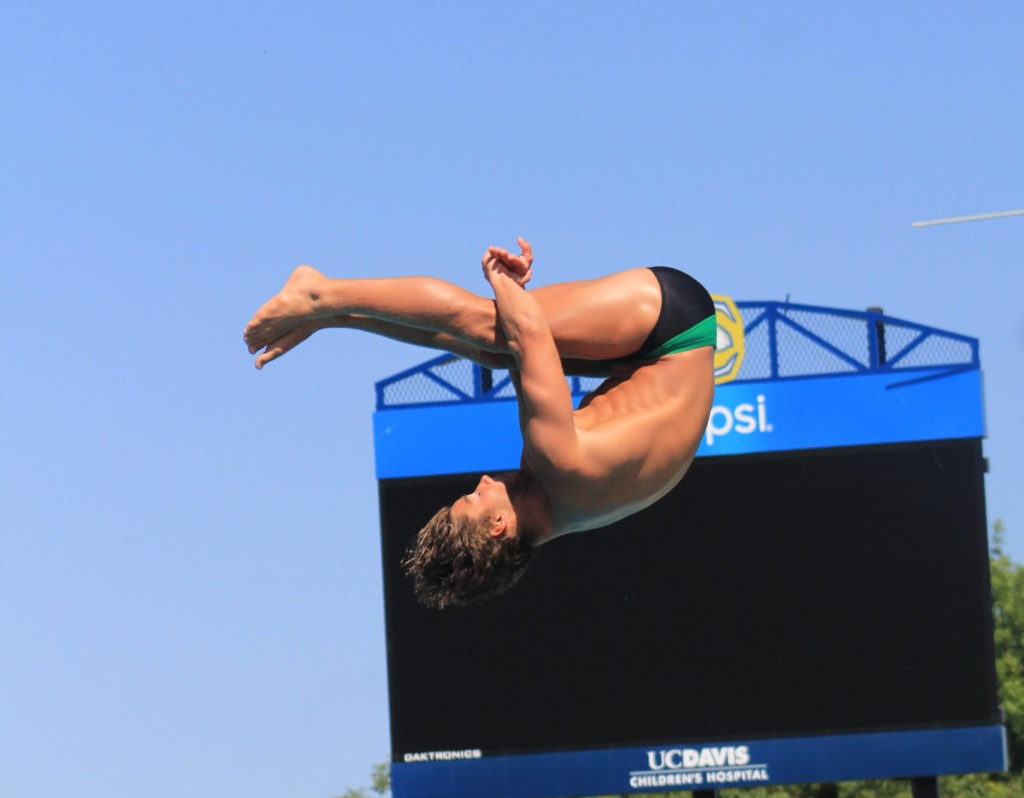 After years of swimming as a Park Terrace Penguin and creating numerous YouTube videos teaching subscribers the art of gainer flips, Christian Brothers very own Owen Hunt (’18) is carrying on his talents on a college level for UC San Diego’s dive team.

Having known Owen since kindergarten, I can attest to his fearlessness and willingness to try anything. From splitting his head open from one to many flips on the trampoline during our sixth grade promotion dance all the way to his eagerness to teach my classmates the newest parkour moves, he never failed to draw attention to his talents.

“My interest in dive started when I was a little kid swimming at Park Terrace,” Owen recalled. “From when I was just a little dude, I would always look forward to getting out of swim practice and going off the diving boards”

When Owen began his freshman year, he was finally able to join a dive team to better his skills on a competitive level. Through Christian Brothers coaching, he was given the opportunity to dive competitively for a local team called Capital Divers. Owen credits CB head dive coach Dede Crayne for his instant success on the diving board.

“I knew when I got to CB I wanted join the dive team because it seemed like such a fun sport,” the senior said. “Christian Brothers [dive] got me in to the sport and gave me the basic groundwork to really understand diving.”

Poppy Ruyak (’19) has remained one of Owen’s teammates and friends from elementary school to high school.  She has incredibly high regards for her friend when it came down to his dedication and drive.

“Owen is willing to try anything,” she says. “If it’s his first time doing a dive, he doesn’t get scared of getting hurt, he just tries and sees how he can improve”.

Poppy reminisced on previous seasons with Owen as Park Terrace Penguins all the way to the more recent years as Christian Brothers falcons. She quickly recollected practices where he would happily stay after to help her master a tricky dive or perfect her technique.

“My favorite memory with Owen is probably just spending time on the pool deck together. Also, I’ll always remember him getting me to join dive and once I was on the team, he always helped me improve. He was willing to stay after practice just to help me out”

Not only is Owen coachable and attentive, he shows his genuine nature through his friendly character in and out of the pool.

“I will always remember and see Owen as someone who’s friends with everyone,” Poppy says. “He’s very outgoing and willing to talk to and help anyone out”

As Poppy and Owen’s days as teammates come to a close, she shared her aspirations for him as he enters the collegiate level.

“I hope that Owen enjoys himself in college and continues to work hard in diving. The happiest I’ve ever seen him is on a diving board and I hope that he will feel that at UCSD”.

Owen is extremely excited to carry on his diving career at UC San Diego in the upcoming fall. He claims picking San Diego was easy for him after years of vacationing there as a child with his family.

“I’ve been vacationing in San Diego since I was a baby and I really know the area and have always loved it. It’s been my dream to live in San Diego for years and this is the perfect move. I’ve known I wanted to be apart of the UCSD dive team since I was a sophomore and going on my recruitment trip really confirmed how much I would love to be there.”

I have no doubt Owen will make a major splash next year in San Diego. Good luck and congratulations, fellow Falcon!