We all watch KBFT every Monday, Tuesday, and Friday. But does anyone know who’s behind the scenes of the show? If you’ve ever been inside Room 608, you immediately see the set, lights, and camera. But if you turn to the right, you’ll see a window, and what’s inside is just simply impressive. For the […] 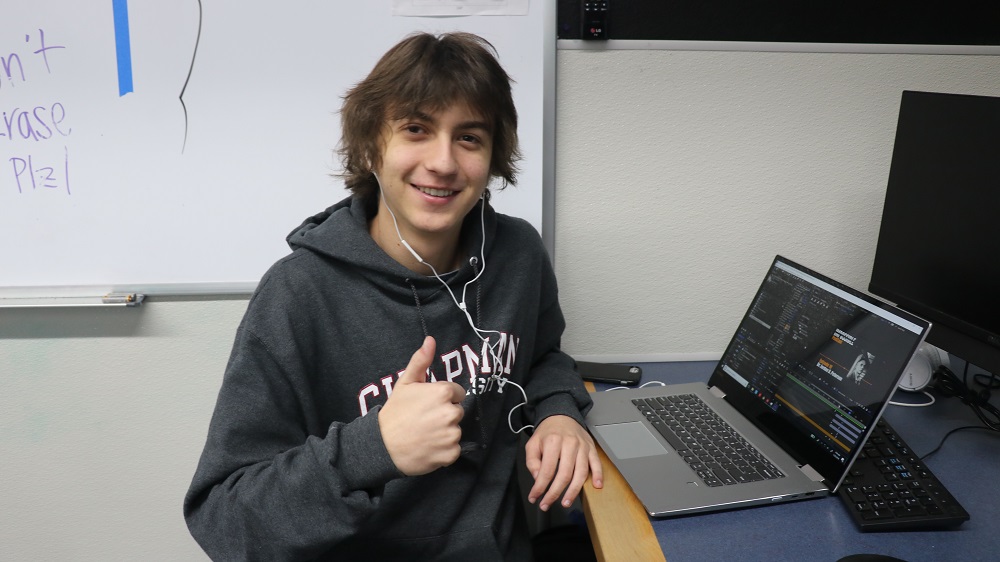 We all watch KBFT every Monday, Tuesday, and Friday. But does anyone know who’s behind the scenes of the show? If you’ve ever been inside Room 608, you immediately see the set, lights, and camera. But if you turn to the right, you’ll see a window, and what’s inside is just simply impressive.

For the past three years, a quiet student has been working his magic in this room. He goes by Chritty, short for Christian, but how did this nickname come about?

Mr. Hogan ‘95, is credited for giving Christian Groen (‘18) the nickname. He claims he first heard the name when he was a kid; a boy he knew went by Chritty instead of Christian, but Hogan wasn’t the biggest fan.

One day in Advanced Media Arts, Hogan told the story of the boy named Chritty. Supposedly, the entire class just stared at Christian, and the name stuck.

“I thought the name [Critty] was terrible and grimy, I hated it. It’s just such a weird name,” he said. But Mr. Hogan quickly assured me that does not imply that Christian is terrible or grimey.

Chritty is one of few to earn an original nickname in the video program, but he deserves it more than anyone I know. He’s a wizard at the computer and can make animations faster than most in the program. But his true talents do not only lie in the classroom — he also works on his skills on his own time

Chritty’s passion for animation and stop motion movies did not originate when he entered CB’s video program, as he has been working on his talents for years.

“When I was little, about 7-ish, I used to make little stop motion animation videos with my Legos. I did that a lot,” he explained. “That was the start of my passion for videos I think, and definitely animation.”

Although he’s been practicing video related skills since he was young, Chritty believes the video program at CB has helped him grow in the field. With a show three times a week, he was required to make animations in a timely manner — and to keep his grade up of course.

“KBFT pushed me to do more motion graphics, which is a lot of what I do now. Motion graphics are pretty much just digital animation,” he explained, “It was also a nice because it provided somewhat of a real world experience with it. Where I had deadlines for different pieces everyday. It pushed me to make more efficient animations.”

Because of Chritty’s natural talent and interest in motion graphics, he has recently gotten the privilege of interning at a film and animation company called Rokovoko. The owner of the company lives in Sacramento, so it works it perfectly for Chritty. Together they’ve been working on an online series about local chefs.

In addition to his internship, Chritty has also gained some internet fame from a YouTube video he made about a year ago.

“The Simpsons video I made like a year ago, and there was this trend of putting Simpsons clips to like lo-fi music. It was a pretty big trend people were getting millions of views and I’m like, I can do that. So I made one, it took me like a few days or something not very long, and I uploaded it and it did pretty well,” he said.

Pretty well is an understatement. Within the first month of the video being posted on YouTube, it had over 10,000 views. Then a couple months later the video was uploaded to Reddit, made it to the front page, and the YouTube video now has over one million views.

We can all agree that Chritty has a bright future in the world of motion graphics and animation. With college application decisions coming out in March, he hopes to get into Dodge College at Chapman or Otis, a small design school next to LMU. With or without the admittance, Chritty will go on to do great things!