It’s no secret that staying active is a key part of living a healthy, balanced life. But there certainly are some secrets in the sports world, like what drives dedicated athletes as they aspire to compete and improve. Why do year-round swimmers wake up at four in the morning to hit the pool? Or […] 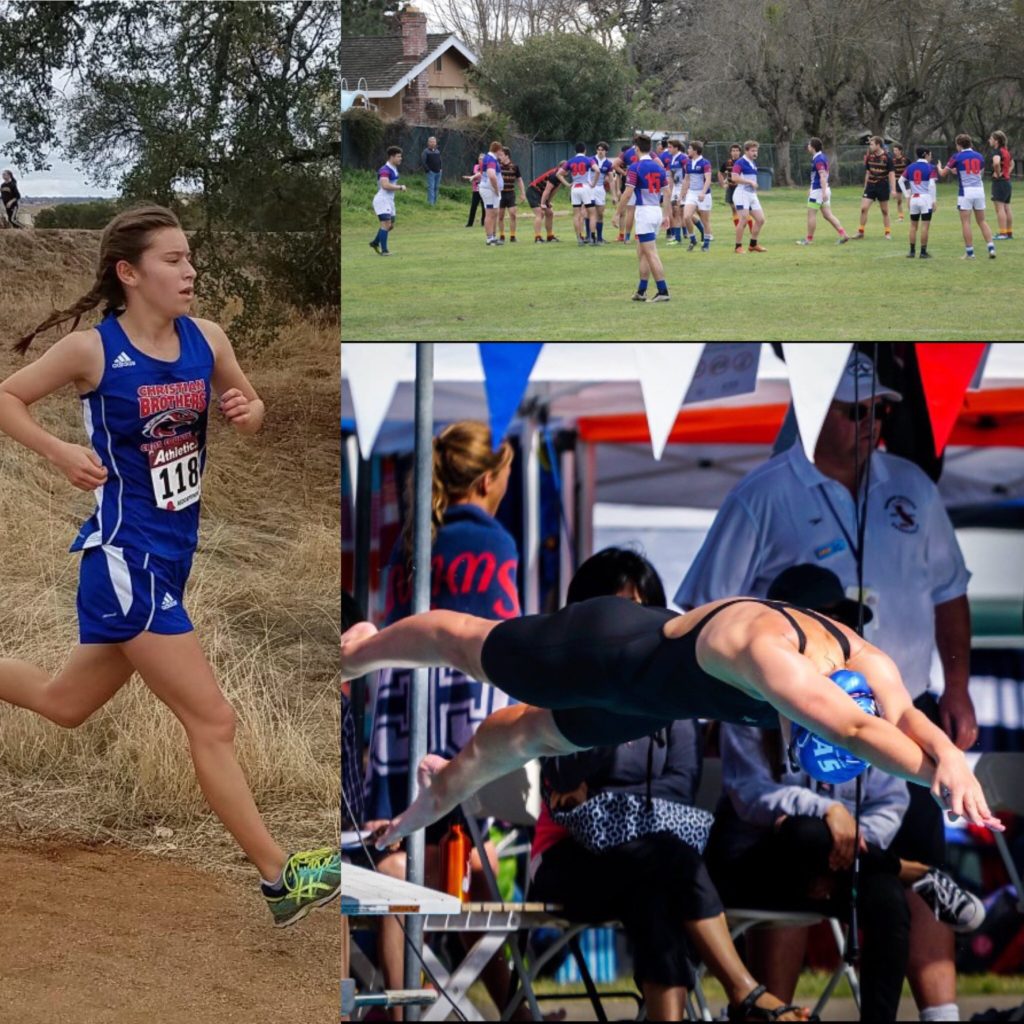 It’s no secret that staying active is a key part of living a healthy, balanced life. But there certainly are some secrets in the sports world, like what drives dedicated athletes as they aspire to compete and improve. Why do year-round swimmers wake up at four in the morning to hit the pool? Or track athletes run for miles on end despite all conditions of weather? Or those who play contact sports look beyond the damages of a concussion to keep their heads in the game? Many CB athletes have woven their sports into their lives so fully that a world without them seems unimaginable.

Amelia Poroli (‘18) is one such athlete. Throughout middle and high school, she has competed on both the cross country and track teams. That’s quite a remarkable commitment to the sport that most coaches use as punishment. 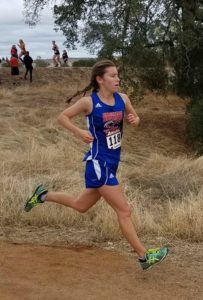 “I run because it’s kind of relaxing, in a way. It’s hard, but it’s a way to escape from everything,” Amelia began. “It’s good for your body and your mind, and it’s always kind of been what I do.”

Amelia rarely takes a day off running, and one day’s training for her (somewhere between six and 10 miles) is farther than most people run in an entire week. Many factors play into Amelia’s dedication to racing, but above all, what motivates this speedy senior is her love for the sport itself and the way it makes her feel.

“I do it because I enjoy it, so it’s not for college or anything like that,” Amelia said honestly. “Basically all of my friends are because of [running], so that’s a part of it. But it’s [mainly] just because I enjoy the sport.”

Despite her passion for exercise and her positive experiences while training with her friends, Amelia admitted that it is not always an easy decision for her to run. Even the fittest and most dedicated athletes encounter difficulties while practicing.

“Sometimes it’s hard to motivate yourself to run, and while you’re running, it can be hard to make yourself go faster,” the racer admitted. “You’re just so concentrated on the pain at that time that it’s really hard to get past that and go really fast.”

Yet, in spite of these difficulties, Amelia has an overall positive outlook on daily practice. She encourages all athletes, especially runners, to keep up their motivation and focus on their goals to get the most out of their exercise.

“You have to want it. It’s definitely worth it, but it’s hard, and you have to be consistent,” she explained. “You can’t just run once a month and expect to be really fast. You have to work at it.”

Like Amelia, Kristina Murphy (‘18) has experienced the benefits and struggles of the sports world. Yet Kristina’s element is not the earthen ground or the wind in her ears, but good old H₂O. 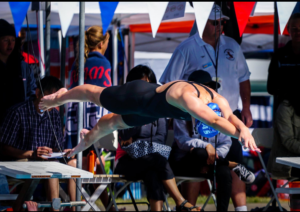 Kristina Murphy dives into the water with style, starting a big race on the right flipper.

Many children swim during the summer months, when the weather is warm and the pool is refreshingly cold, yet diving into the competitive world is a big step. Kristina practices eight times a week, totaling at least sixteen hours and often more. Some of these weekly practices happen before school, which makes for a very early start to Kristina’s mornings.

“I have to get up at 4:15, and it’s really difficult. I set three alarms in five minute intervals because I cannot trust myself to wake up to just one,” Kristina said with a laugh. “Sometimes my parents have to call me to wake me up.”

Two hours of intense swim practice is difficult under any circumstances, but it can be extremely draining when followed by seven high school classes and then another two hours in the pool.

“Once I’m up, practice is good,” Kristina began optimistically. “And then I’ll get through my first three classes, and then it just hits me and I’m dead and falling asleep in class.”

Multiple alarms going off at four in the morning followed by an intense workout would make anyone tired. It also begs the question of how the remarkable Kristina manages to do it.

“The practices are insanely hard, but the people that I swim with make it so much better,” she explained. “If I swam by myself, I would not be able to get through it.”

Daily practice has done wonders to enhance Kristina’s natural talent, and the sportswoman recently committed to San Diego State University to pursue her sport. Kristina’s performance at big and important meets has not only helped her advance her swimming career, but has also shaped Kristina’s character and how she approaches everyday challenges.

“When you don’t make your goal times, you ask ‘What was that season for? What was all my training for?’ But I think you have to realize that not everything goes as planned. Swimming has really taught me that and how to deal with my failures, and also with my successes.”

Unlike Kristina and Amelia, who both play non-contact sports, senior football and rugby star Mitchell Berger (‘18) prefers to play with a tackle-ready team. Of his two sports, Mitchell was far more excited to talk about rugby, a relatively little-known pastime here in the U.S., but certainly one of Mitchell’s favorites. 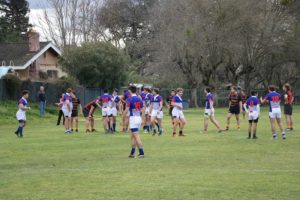 “I enjoy rugby because I’ve just had a lot of fun playing it the last five years of my life,” he said. “It’s a super great sport full of camaraderie and great people no matter where you go, no matter what team you play on.”

A veteran in the art of getting concussions, Mitchell has not been deterred by the constant threat of being injured on the field. Nonetheless, he prefers what he sees as rugby’s relative safety as compared to football.

“[Getting injured] doesn’t scare me,” he began. “I understand with rugby that parents might be afraid that their kids might get hurt, because there are no pads, but in a way it’s almost safer because they teach you a much safer form of tackling and you can’t just lead with your head, like in football.”

The two main factors that contribute to Mitchell’s passion for rugby align almost exactly with those that motivate Amelia and Kristina: love of the sport and love of the team.

“I really like the physical part of it. I love playing the actual sport,” he said, before highlighting one of the unusual but highly-valued traditions of this foreign sport. “The cool part is that at the end of every game you get together with the other team in the middle of the field and select a man of the match from the big guys and the small guys. . . and then we just go eat food together. [It’s] a tradition that’s been there for decades or centuries, a long long time.”

Wins and losses aside, much of the fun involved in any sport is merely the act of playing and the fellowship that comes alongside it. Of course, in Mitchell’s case, the free food is a key motivator as well.

From the pool to the hills to the field, CB students choose to play their sports for a combination of reasons. As with most time-intensive activities, the main force driving successful athletes is usually a long-standing passion for their sport. For those of us with less passion, the occasional jog or splash in the pool will suffice.