With the recent addition to the Star Wars franchise, The Last Jedi has reopened the minds of fans to the world George Lucas created. It is amazing to think that the idea of Star Wars originated forty years ago and that the fan base is still growing. The concept behind the films is simple: good vs evil. Yes, there […] 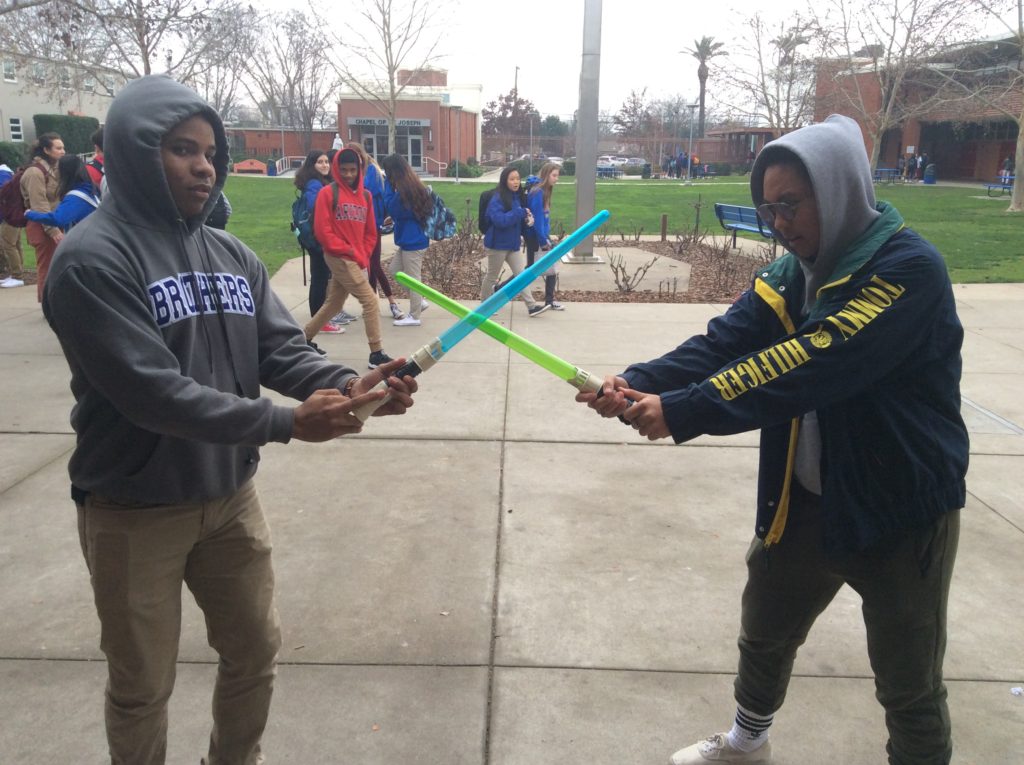 With the recent addition to the Star Wars franchise, The Last Jedi has reopened the minds of fans to the world George Lucas created. It is amazing to think that the idea of Star Wars originated forty years ago and that the fan base is still growing. The concept behind the films is simple: good vs evil. Yes, there are a lot more confusing things in the movies like blasters, swords made of lasers, people with telekinesis, small teddy bear creatures, and much more. However, when it comes down to the basics, the main synopsis focuses on the long-enduring battle between the light side and the dark side.

Although the story is completely fictional, many of the fans have once pondered which side they would choose to be a part of if they were given the choice. After asking myself this question, I thought it would be interesting to see how the students of Christian Brothers would respond. Before I collected testimonies, I predicted that the light side would be chosen more than the dark side. Thankfully, this was the case as 11 out of the 20 people I asked said they would be a part of the light side. To add onto this scenario, I asked some of those I had asked previously about who they desire the most based on their answer.

Nico Cuomo (’18) was seduced by the dark side when he replied to the Talon. He found the evil characters of the story to be a bit more intriguing than anyone from the light side.

“The dark side has a more interesting uprising and tends to have more intriguing characters,” Nico commented, “I would probably say that Darth Maul is the most appealing Sith in the entire saga. His dual lightsaber in The Phantom Menace was pretty cool too.”

Darth Maul’s presence in The Phantom Menace has left a huge impact on the fan base of the series. His overall look intensifies every moment he appears in the movie, although the amount of screen time he has is arguably not enough. One could say that his screen time was cut in half….

Thankfully, there is a student on our campus that does prefer the light side over the tempting dark side. Frederick Weare (’18) found the path of the Jedi more intriguing than the Sith. His love for the saga developed after he first saw Obi-Wan Kenobi in the prequels.

“The light side because the dark side uses violence senselessly,” Fred stated, “My favorite character has gotta be Obi-Wan Kenobi. He is wise, patient, and a good fighter. I especially liked him in the prequels because we see what shapes him and how everyone either feared or respected him.”

I would have to agree with Fred on one thing: Obi-Wan Kenobi can be argued to be one of the most entertaining characters. His character adds on so much to the saga whether it be his fight with Darth Maul, the friendship he builds with Anakin Skywalker (Darth Vader), the protection and guidance he offers Luke Skywalker, etc. Even Han Solo and Princess Leia named their son (Kylo Ren) after Obi-Wan. It is safe to say that Kenobi is a great character in Star Wars.

As you can probably tell, I am a huge fan of Star Wars. I have been in love with the saga since I was able to understand how a television works. If I was approached with a question like the one I asked Fred and Nico, I would definitely say that I would be a part of the light side. In terms of characters, I have to say that Han Solo is my all-time favorite character in those movies. I could sit here and write a college-length paper about my adoration for that character. His presence in scenes seem to bring out either the best or worst in people, depending on who is around him. Also, he flies the most memorable ship in those movies. It is quite obvious that he named the Millennium Falcon after the Christian Brothers mascot.