Birds Of A Feather Support CB Together

Hi, my name is Delaney Bird. You probably don’t know me. Or maybe you do, who’s to say. But I can almost guarantee that you know some member of my family. Maybe you know my cousin in the senior class, Olivia Johnson (‘18) (Yes, we are cousins. Everyone’s always so surprised when they find out). […] 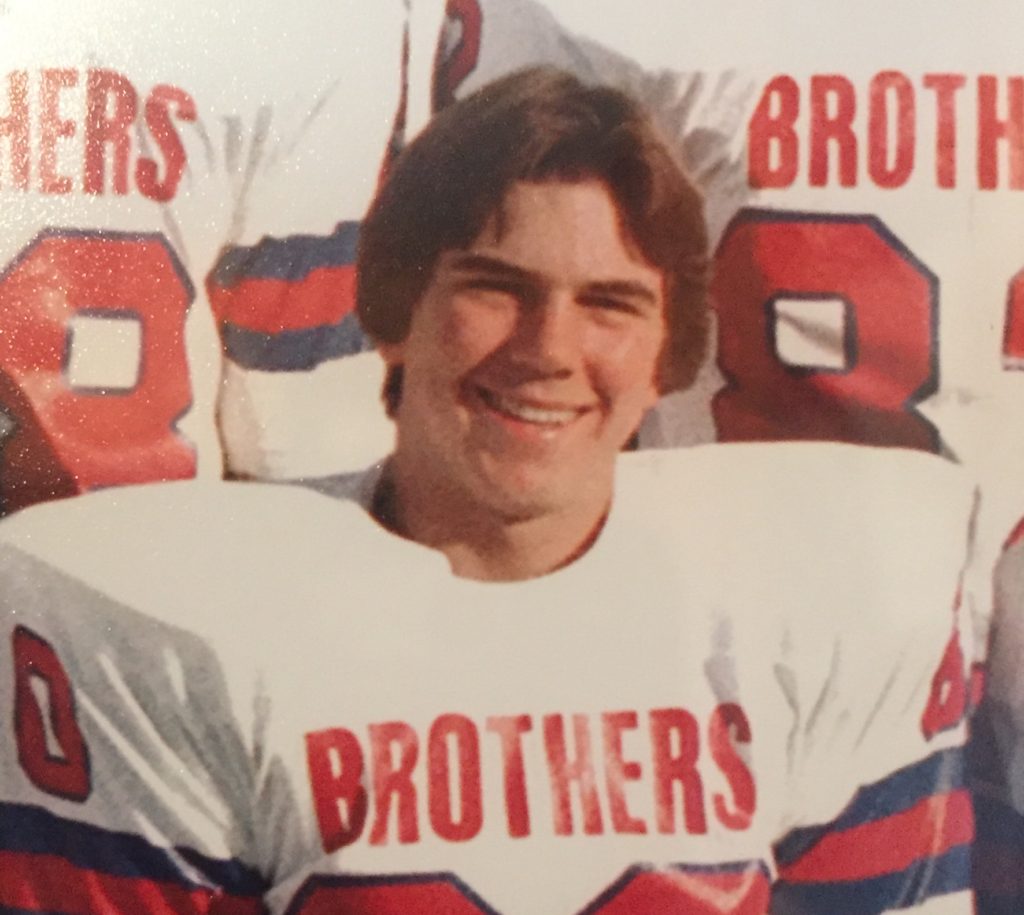 Hi, my name is Delaney Bird. You probably don’t know me. Or maybe you do, who’s to say. But I can almost guarantee that you know some member of my family. Maybe you know my cousin in the senior class, Olivia Johnson (‘18) (Yes, we are cousins. Everyone’s always so surprised when they find out). Or maybe you know one of my many other cousins who have gone to school at CB.

Or maybe you know my dad, Troy Bird ’82 from his super involvement with all things CB. In any case, my family is Lasallian through and through. I mean, I practically grew up on this campus. Seriously — between my dad’s involvement, my sister attending school here, and my mom working here for a couple years, I have always had CB in my life.

Growing up in a CB family had its benefits and, well, interesting bits as well. One good thing is that when I started freshman year here, I had the campus memorized already, so that took away some of the stress of being a newbie.

One weird thing is that I had to start calling people by their last name as opposed to their first. Do you know how hard it is to transition to calling people “Mrs. So-and-so” or “Mr. So-and-so” after literally years of calling them by their first name? Well, it’s hard. And sometimes awkward when you slip up. But I do have lots of funny stories from when I was just a little one traipsing around campus.

For instance, I had racked up 3 “detentions” before I had even started school here, because I was a little smart aleck who made fun of Mr. Steve Barsanti’s ’78 bald head (When he was the dean, too—how dumb was I?). He wrote up slips and everything!

“I think it was extremely unfair because he was bald,” says my dad jokingly, after I asked him if he even remembered all this.

Another time, when I was around six or seven, I accompanied my dad to campus to meet with Mr. Lorcan Barnes about…something. I was six, how am I supposed to remember? Anyway, I brought along my beloved stuffed animal, Whiskers the cat. I started fidgeting around with the cat, playing that game where you toss something up and then catch it, and you keep throwing it higher and higher. I was having a grand old time and then… I threw Whiskers up so high that he landed on the roof of what is now the Learning Commons.

I was distraught. I was inconsolable. I mean, I was a kid. And you know what happened? Mr. Barnes got out a ladder from the utility closet and climbed up to the roof to get my cat.

“That was pretty awesome,” my dad says. “[He’s] a hands on president. I think he was actually just trying to recruit you to CB. He saved your cat [so] then you couldn’t go anywhere else.”

These stories may seem fun, but truth be told, they are just a taste of my memories of CB.

The funny thing is that I’m not the only one who has been influenced by my family’s love for CB. Anyone who went to elementary and middle school with me knows how much my dad talked about CB — shoutout to my St. Mary gang!. He was a bonafide spokesperson. He gave out CB shirts, gave tickets away to Holy Bowl, and, of course, trash-talked Jesuit, all in a bid to get the kids from my class to go to CB one day.

And it worked! The majority of St. Mary class of 2014 ended up going to CB. Nice work, T-Bird (That’s his nickname in case anyone was wondering).

If you think I’m lying about all this or exaggerating about how much he talked about CB to my class, ask anyone who went to St. Mary and they’ll tell you all about it.

“I remember every Holy Bowl he would hook up my family, friends, and I with CB gear,” says Kelsey Wurm (‘18), a fellow graduate of St. Mary elementary school. “Every since we were little he would tell us to go to CB because it really is the place to be.”

“I remember Mr. Bird bursting into our classroom in the middle of the school day unannounced and yelling “CB’S IN THE HOUSE!!!” says Marliss Neal (‘18), another graduate of St. Mary. “[He proceeded] to pass out CB sweatshirts and socks and stickers to everyone in class. He left shortly afterward. He straight up just showed up to yell about how great CB is and then left.”

“Evidently,” she goes on to say, “it was a good strategy, since I don’t think there has ever been a class with a higher percentage of [St. Mary] students who went to CB.”

It is amazing how many kids from our class ended up going to CB because our school was literally next door to St. Francis. I mean we did lose a few people to the Troubies and the, ugh, Marauders, but what’s five or six kids out of thirty? Nothing.

Not only was my dad an avid CB spokesperson at my school, but he would also give out stuff when I had friends over.

“Anytime I was at your house and got cold because we were outside or in the pool, he would offer me a sweatshirt and then direct me to a huge bin in the garage full of CB sweatshirts,” says Marliss. “It was wonderful. He just had them on hand. He was like the distributor for CB’s student store. The first time I went into the CB student store … I remember being a little underwhelmed because I had grown accustomed to the standard of Mr. Bird’s [selection].”

And if any of my friends did or said or wore anything that my dad deemed as against CB, boy oh boy would there be hell to pay.

“Once I wore a St. Francis sweatshirt to his house and he tried to make me leave,” Lauren Loyola (‘18) not-so-jokingly states. “Classic T-Bird.” 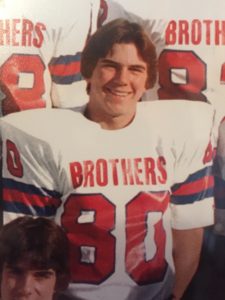 My dad his Junior year of high school at CB.

If you couldn’t tell by this point, my dad is definitely the central figure in all of my CB memories. He and all of his siblings went to Christian Brothers or Bishop Manogue, since CB wasn’t coed when he was a teenager. He met the majority of his friends at CB and is still really close with them, and they all now have kids here, did have kids here, or will soon. CB is synonymous with family for him. He’s incredibly proud of his Lasallian background. Fiercely proud. He even made the whole family go to St. John Baptist de La Salle’s birthplace during our family vacation to France. He’s practically a fanboy. And he taught me all that I know. 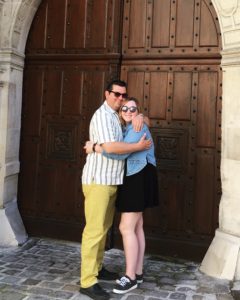 My dad and I in front of de La Salle’s birthplace in Reims, France.

My dad raised me with all things CB: I started going to Holy Bowl as soon as my dad could get me to go, I knew the CB fight song before I knew how to properly write my own name, and I knew the proper way to begin and end a prayer (“Let us remember” … “Live Jesus in our hearts”) before I knew how to say a full rosary. I knew everything there is to know about St. John Baptist de La Salle long before my freshman year began.

The best part is that my dad knows how to show his appreciation and love for CB. He’s constantly on campus, either volunteering or visiting. He volunteers at or attends so many events I don’t think there’s been a single Connection magazine in the last decade without a picture of him. Heck, he’s even got his bobblehead in a couple spots around campus. (Yes, he does have his own bobbleheads, and yes, you can find them in Mr. Havey’s room and the Talon Newsroom room in the Learning Commons and probably in other places that I am not yet aware of). He’s around campus so much some of my friends knew him before they knew me.

“I knew Troy Bird as the well-dressed guy who would pop in and out of my classes,” says Julianne Downing (’18). “I had easily seen him 10 times before I met you…He was so comfortable and casual on campus. I had no idea who he was [or] why he was there, but [CB] was obviously his home.”

Now, this all may sound like a lot to some people. But having a lot of appreciation and love for the school that shapes so many people into who they will be is never a bad thing. I mean, yes I did consider going to St. Francis just to spite my dad, but that’s more of a teen thing than an anti-CB thing. My dad’s love for the Lasallian tradition is such a big part of his life that it has become a part of mine. I used to think my dad’s overt connection to CB was a little strange, but I get it now. I don’t think there’s every going to be a time in my life that La Salle or CB is not present. It’s a community unlike any other.

And it is, after all, the place to be.