With the Falcons season coming to end, we have come to realize how special this year was for Brothers Varsity football. With a new coaching staff, new transfer quarterback, and a new offensive coordinator, there is one word to that describes this year in Falcon football: Electric. There is one man who has made this […] 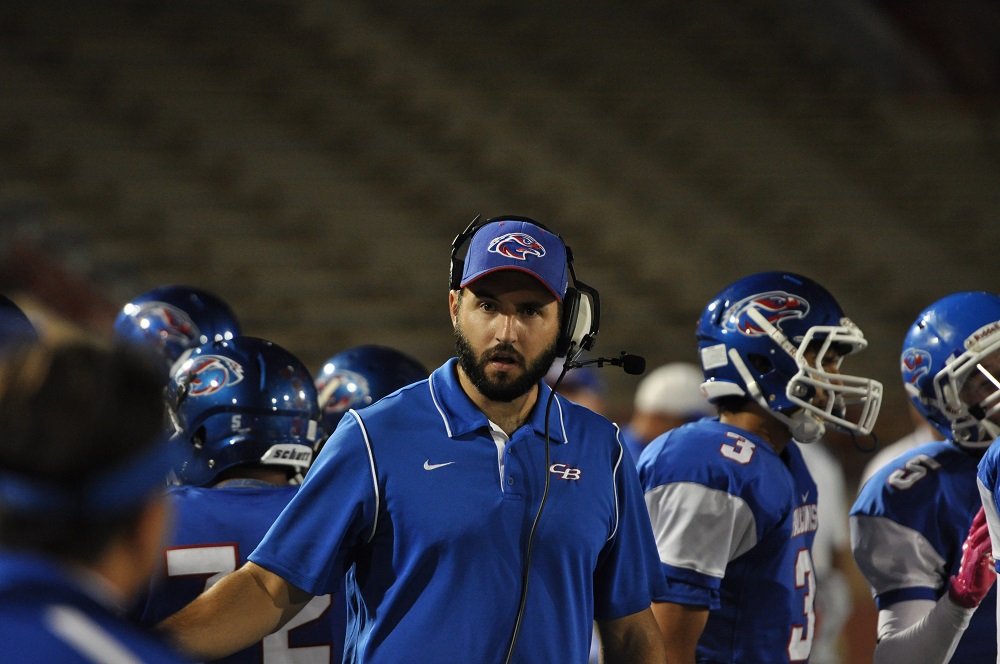 With the Falcons season coming to end, we have come to realize how special this year was for Brothers Varsity football. With a new coaching staff, new transfer quarterback, and a new offensive coordinator, there is one word to that describes this year in Falcon football: Electric. There is one man who has made this word even a possibility when describing the season, and his name
is Mr. Evan Boylan.

Some would know this man with the excessively long beard as Mr. Boylan, the fun History Teacher. But now you can see this man on the field on Friday nights with his play sheet in hand,
ready to call the perfect game. He is the reason our boys of fall are so electric on offense, but it wasn’t always like this for Coach Boylan. Last year his job was to stop the electric offenses as
the defensive coordinator.

Last year he was indeed worried of opposing stealthy offenses, but now he is that man drawing up game plans. Coach Boylan lead the boys in blue to an amazing 10-3 season right along Coach Tyler Almond, the new head football coach, and the rest of the staff. He did this by having one of the most explosive or in other words “electric” offenses in the Section, scoring 50 points a game. He feels he has grown a ton these past couple of years.

“I’ve learned a lot the last two years,” he says. “I feel I got to be behind enemy lines — I got to be a spy. I know what those defensive coordinators are going through ever week, and it’s really hard.”

Coach Boylan has now been a coordinator on both sides of the ball and has done well at both.

“I think it’s easier to coach offense than defense, just because you get to dictate,” he says. “You get to choose the personnel and the motion before every single play. You know what’s going to happen — you know what you want to happen”.

“Defense can dictate to a certain degree, but not like offense,” he added.

The Falcons had one of the most electrifying offenses in the section because he put in the hours every single day and night trying to make the team have a perfect offense. He knows every play,
what’s supposed to happen, who’s supposed to get the ball and how the play is supposed to be run.

“The preparation is more making sure I’m getting guys in the right spots,” he says. “To be successful, we have to have the right personnel groups in at all times.”

A big reason the offense was so successful was because of one player in particular: Gunnor Faulk (’18), the transfer quarterback from Georgia who was the vocal point of the offense. Coach
Boylan was blessed to have Gunnor and they became partners in crime. In a previous Talon article, I asked coach Boylan what he feels Gunnor brought to the offense.

“Working with Coach was awesome, he let me have pretty much free range of the offense” Gunnor says. “He trusted me and I trusted him”.

That’s exactly what Coach Boylan needed in someone to run his electric offense. There was one other man who helped coach with his offense scheme and learning, previous CB head coach, Mr. Dan Carmazzi ’76. Coach Carmazzi was Coach Boylan’s head coach at Jesuit when he was in high school. Their relationship has grown over time and they make for a great team.

“It’s been really cool game planning with him and talking on the headset,” he says. “Like when he says ‘great call’ that makes me feel good to impress him.”

Coach Almond and Coach Boylan have grown to learn to work together and become friends.

“I think coach Boylan is an excellent coach” Coach Almond says. “He’s a very good person, good friend and he’s been excellent to work with”.

In the 100th season of Brothers football, we have every reason to smile and be happy about the season we had. Yes, it didn’t end how we wanted, but we got a fabulous new head coach, a
great offensive coordinator and many more seasons to come. So don’t be surprised if this electric style of play continues to dominate defenses all over the section.