Polos. No late start or Falcon Flex. CB only sweatshirts. Assigned seating. Priest on campus. Father Murin looking classy. That’s right. It’s Liturgy day. But before you start moaning and groaning, take a minute to think about how much time and energy was put into this day. The countless hours brainstorming for the liturgy and […] 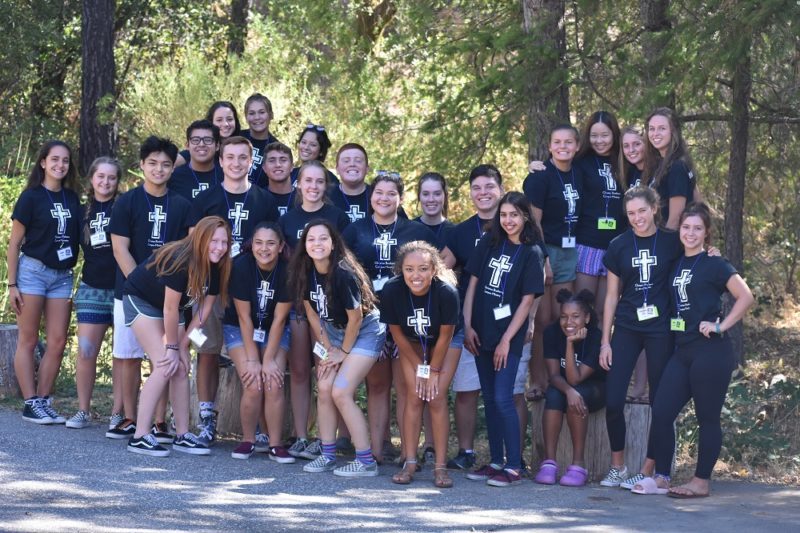 But before you start moaning and groaning, take a minute to think about how much time and energy was put into this day. The countless hours brainstorming for the liturgy and decorating the gym is often disregarded. The masterminds to these quirky liturgies work hard to bring us relatable and entertaining masses that are fully appreciated. But in order to truly show our gratitude, we must understand who to direct it towards and everything they do. To CB’s own student campus ministry team with those cool black t-shirts, also known as the God Squad, this article goes out to you.

Up until two to three years ago, God Squad didn’t exist. Liturgies and prayer services were all organized by a senior semester elective class that could only be taken as a B set. According to our director of campus ministry, Mrs. Jennifer Yearwood, most students took the class, not because they were genuinely interested in planning liturgies, but because they thought it was an easy A. Having it be a class also limited it to only seniors who had a free B set to spare. It was not the inclusive community that us Falcons are used to.

“After [having it be a class] for about two or three years, I realized ‘I think there’s a better way,’” Mrs. Yearwood stated. “I wanted to take it out it of the class curriculum and open it up to all grade levels because just having it for seniors for one semester felt like I was always having to start over and I knew that there would be energy and interest.”

Much to Ms. Yearwood’s luck, or just good intuition, the first announcement of this student run campus ministry team brought about 60-70 people to her door, thus setting the path for the formation of God Squad Club.

But to set the record straight — “We aren’t really a club. We are more of a team. A leadership team in campus ministry,” explains ‘club’ moderator, Mrs. Yearwood.

“The God Squad is the student campus ministry team that is responsible for the planning, preparing, and presentation of the prayer and worship events on campus i.e. the prayer services and liturgies,” she tells the Talon.

“Everything that happens during a mass or prayer service, God Squad has a part in,” adds Matthew Miles (‘18), an active member of God Squad.

Matthew is also part of the Praise and Worship Team, which is one of the four main teams that make up God Squad.

“We have a Praise and Worship Team. They are the ones that do the music. Then we have a Technology Team. They might help create the PowerPoints or the videos and then they help run them during mass. We have an Environment Team. Those are the kids who are creative and artistic, who help to decorate. We have the Prayer and Readings team. Those are the kids who help find and do readings. Those are more the people who want to be upfront speaking.”

These set of teams allow students of all talents to participate in the club.

“Everyone has their place where they feel comfortable sharing their gifts to all bring it together into one whole mass or prayer service,” elaborates Ms. Yearwood.

With these hardworking brilliant young minds working to create masses that are spiritual and engaging, nothing is impossible for the God Squad. We certainly have seen a increase of spirit and energy ever since God Squad has taken over the masses and prayer services. But the only way to truly understand the entrancing energy and spirit of liturgy is to become part of the team itself.

“Join God Squad. It’s not scary. It’s really fun. We don’t exclude anymore. I was afraid to join because I’m not super religious, like I’m not the most religious person in the world but it’s a place where they don’t mind,” Matt declared. “We are inclusive to everyone. It’s amazing. It’s fun. We have meetings every month. We get donuts. It’s pretty cool. So join. Definitely join. And we get cool black t-shirts!”

So if you’re looking to expand your faith on campus, God Squad is the thing to do. It’s an open minded and inclusive community that allows all grade levels to join. All you have to have is faith and interest in the prayer and worship life of Christian Brothers High School. And even if you don’t, just remember the next time you think about chatting during liturgy, remember that the God Squad put a monumental amount of work into actually planning and doing a liturgy.