Should You Name Your Car?

Since the beginning of time, humans have been naming things. We give our pets human names to make them part of our families, which I guess is acceptable since they’re living things. But recently, there’s been an increase in people who have given their cars names. This is a confusing trend, because cars aren’t living […] 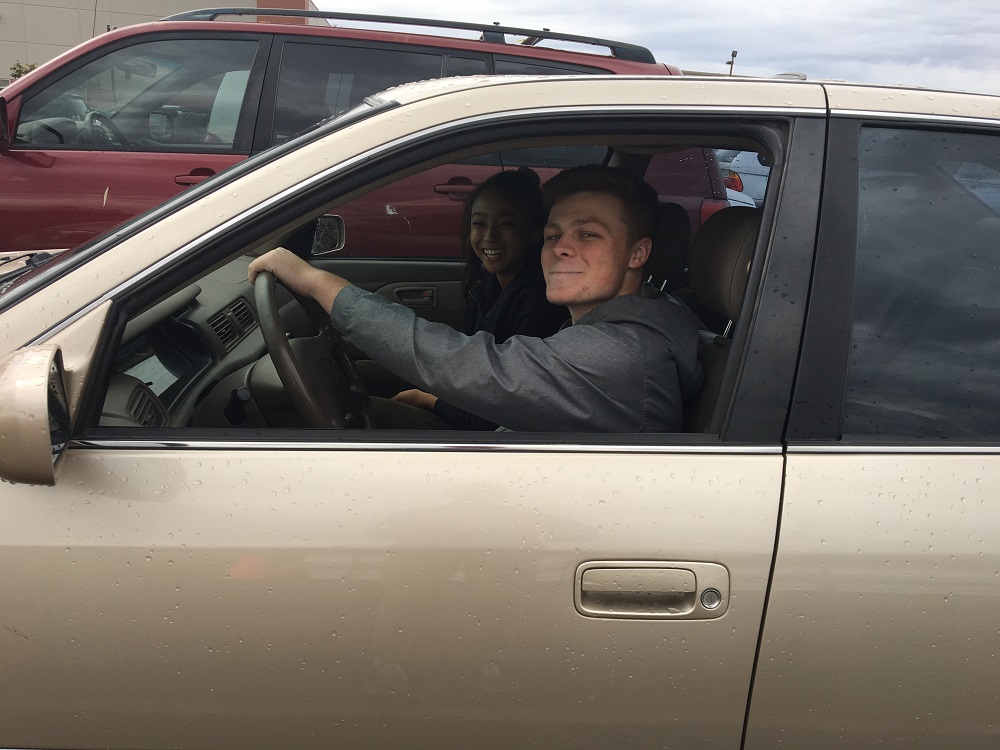 Since the beginning of time, humans have been naming things. We give our pets human names to make them part of our families, which I guess is acceptable since they’re living things. But recently, there’s been an increase in people who have given their cars names. This is a confusing trend, because cars aren’t living things with personalities — they’re simply large hunks of metal with an engine that transport us from place to place. Cars are simply things that get us where we need to go. But to many people cars mean much more than that. Naming cars is a major part of people making their cars more important than they really are.

Sam Tanberg (‘18) named his truck Monica because “I called her that once and it stuck”. Sam is a strong believer in naming one’s car.

Despite the love and respect Sam has for Monica, he doesn’t consider her to be a part of his family either.

This kind of dependability is the type of stuff we as humans consider to be a crucial part of creating a strong and true friendship. The fact that Sam has been able to develop this kind of relationship with his car shows that he is really doing something right. Maybe more of us should try to follow his lead in order to have more dependable cars that won’t let us down and leave us stranded on the side of the freeway with a blown out engine.

Synclaire Warren (‘18) takes Sam’s ideas about trust and love for the car to another level with her whip.

“I named my car Pepper because I have a Cayenne Porsche, and I named her Pepper after the spice Cayenne Pepper,” the senior says.

Syn and Sam both agree that everyone should name their cars.

Syn really believes that it takes time to develop a close enough connection with your car for it to deserve a name, as she can tell you from personal experience.

“It took me seven months to feel that connection before I named Pepper,” she says. Where Synclaire differs with other CB students is how she feels about Pepper as one of the members of the Warren clan.

“Pepper is for sure a part of my family, she’s the most dependable thing in my life,” she says. This kind of love for a car that Synclaire clearly has is admirable, but also could be devastating if anything were ever to happen to Pepper.

Matt Schneider (‘18) agrees wholeheartedly that his car, a Toyota Camry named Caleb Swanigan, is part of his family.

“I named my car Caleb Swanigan, because one day it was making weird noises, kind of like a boiler maker, so me and Jason named him after famous Purdue Boilermaker basketball player Caleb Swanigan.”

Matt also thinks that if you name your car it should be a funny name with a good story behind the name. Caleb Swanigan, despite his past engine trouble, has never let Matt down.

“Sometimes he makes weird noises, but he always gets me to the promised land,” says Matt. As for some general advice for any of you thinking about naming your cars, Matt advises that, “if you’re going to name your car, make sure it’s a funny name. If your car has a name, it shouldn’t be lame and forced, it’s gotta be natural and authentic”.

Making cars parts of our families by naming them doesn’t make much sense, especially considering that with one mistimed turn or lapse behind the wheel, the car can be totaled and then quickly become a part of the past. If the car has a name and you have begun to develop an affection for the car, the loss of this car could cause emotional trauma and a period of mourning for the car that has become so special with it’s name.

Jules Fuhs (‘18) whose Honda Pilot was named Hank, as in Hank the Honda, recently lost her car in a tragic accident that ended in Hank’s totaling.

“I wanted to name my car to feel more in tune with my car, I had a connection with him, me and Hank were buddies,” Jules noted sadly.

The accident that ended Hank’s time in this world was tough to swallow for Jules.

“I mourned my car’s loss when I totaled him, I’m still mourning”.

But Jules attested that “my car definitely wasn’t part of my family — c’mon man” when asked if Hank was a part of the Fuhs family.

Emily Shepard (‘18), whose Lexus has been on it’s last legs for the past year and a half, knew that her car was prone to breaking down at any moment. Because of this, Emily never named her car. When her car abruptly stopped working as she was driving home last week, Emily knew that it was all over for the ole reliable Lexus. “

“It’s been rough knowing that I don’t really have a car anymore, but its breaking down for good definitely would be harder if I had given it a name”.

It’s just like creating a connection with anything or anyone. When you become attached to that thing or person you will enjoy the time you have with it, but also when that time runs out it will be a hard fall.

For example, I recently got into a little fender bender and have been without my parents car that I usually drove everywhere for awhile. It has been hard to not have that easily accessible and convenient form of transportation, especially living way out in the boondocks in Folsom. But I’ve never given that car a name, and this has helped me not be too disappointed by my time without the car.

So really it’s up to you if you want to name your car. Sure, you run the risk of wrecking your car and being disappointed and sad without it, especially because of the name recognition that you’ve created with your car. However, if you have a good name that is creative and funny, it’s up to you if you want to give it a name. That connection with your car is just like creating a connection with a new friend. You risk getting your heart broken when it possibly turns on you and breaks down or you turn on it and crash it. But also there are endless possibilities for good times you can have with your whip after you name it.

From listening to Drake in the car after you’ve had a rough day or the fun trips with your friends to sporting events, it’s easy to create many special memories in your car. These types of memories can all be enhanced with a unique name for your car. But when you think about naming your car, be sure to heed the advice of the wise Matt Schneider: a car’s name can’t be forced, it should just come to you somehow authentically.