You are here: Home \ Arts \ Featured Posts \ Stranger Things Will Turn Your Frown Upside Down
Arts
0

Stranger Things Will Turn Your Frown Upside Down

There are a variety of binge-worthy shows on Netflix, but one in particular can be described as the most worthy of binging. With a 96% rating on Rotten Tomatoes, Netflix’s original Stranger Things released its newest season on October 27th under the name Stranger Things 2. To those who are not familiar with this show, the story takes […] 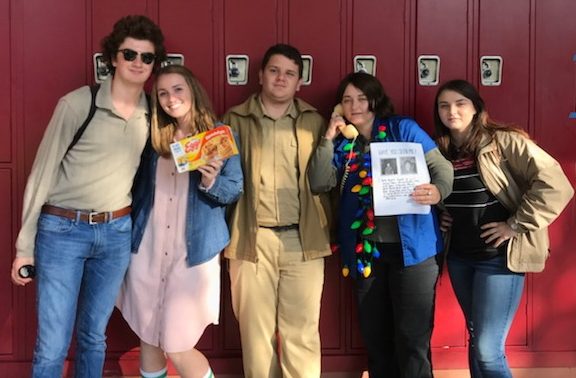 There are a variety of binge-worthy shows on Netflix, but one in particular can be described as the most worthy of binging. With a 96% rating on Rotten Tomatoes, Netflix’s original Stranger Things released its newest season on October 27th under the name Stranger Things 2. To those who are not familiar with this show, the story takes place in the fictional town of Hawkins, Indiana in the early 80’s. It follows a group of misfit boys, a heartfelt cop, a worried mother, and many more in search for a missing boy. Throughout their journey, they come across many mysteries such as confidential government experiments, supernatural forces, and a very unusual girl. This show hooks those who dare to dive into the world of the Duffer Brothers, the show’s directors and co-executive producers.

With the release of the new season, many students set aside their schoolwork to fill in for Stranger Things viewing. A show that has this much talk must have a valid reason for all of its views. The Talon searched around campus for an answer on why Stranger Things is so popular.

Avid viewer Riley Schanberger (’18) had been preparing for this new season by watching the first season again over the summer.

“I think Stranger Things is popular because of the geeky vibe it offers,” Riley said. “It’s ’80’s style setting, the personalities of the kids, the music, and even the show’s intro. It feels unique compared to other shows.”

The show’s introduction has a compelling and neat sound to it. Jack Milliken (’19) at KBFT would agree since he based their outro of the Talon Morning News on the intro to every episode of Stranger Things. The show’s unique atmosphere adds onto the suspense of the story. The setting, music, and characteristics of the protagonists open an opportunity for a well-rounded show.

On October 27th, Emily Shepard’s (‘18) only thought was when, where, and how she would view Stranger Things 2. Before she could hurry home to start the binge, she told the Talon about her adoration for the show.

“I think [Stranger Things] is popular because all the characters are super fun and quirky,” Emily stated, “I think the thriller and the added mystery makes you feel like you are experiencing all the crazy supernatural stuff yourself.”

The supernatural portions of the show are definitely eerie. They give off a sense of uneasiness and excitement. Stranger Things is the perfect combination of drama, science fiction, horror, and comedy. Each character possesses a different attribute that allows more relation to the viewers of the show, whether it be the friendship Mike offers, the innocence Will has, the bravery Hopper obtains, or the care Eleven gives.

One of the reasons why Bella Arriaga (‘18) found an interest in Stranger Things was because of the acknowledgement some of the actors received.

“It has great actors like Millie Bobby Brown and Finn Wolfhard,” Bella shared, “These actors bring good energy to the show.”

Both Brown (Eleven) and Wolfhard (Mike) went on to receive awards and new roles in future films. Finn was recently in the remake of Stephen King’s It as Richie Tozier. Millie was recognized for her performance in Stranger Things when she was awarded MTV’s award for Best Actor in a Show in 2016.

With all the hype he heard from friends, Nico Cuomo (‘18) decided to try Stranger Things. After watching the first season, he explained to the Talon that he enjoyed the show vastly.

“The show is filled with mystery and bone-chilling moments,” Nico replied, “Every episode ends with a cliffhanger that keeps the viewer in suspense for the next episode.”

Each episode has an ending that always keeps the viewer at the edge of their seat. Thankfully, the episodes come out in bulk so that there is no separation between the release of one episode and the next. I recall starting the first season around 11 PM and not putting the phone down for a couple hours. It wasn’t until I realized that it was 4:00 in the morning when I noticed that I lost track of time.

Stranger Things has brought a new and compelling story to those who watch it. It has the capability to make you smile, laugh, scream, and cry. According to variety.com, over 14 million adults from the ages of 18 to 49, have watched and re-watched Stranger Things. About half of this article was written in front of a television with the newest season playing. If you have not watched the show and are willing to do so, I highly recommend you do. I can say with 100% certainty that you will enjoy Stranger Things if you give it a shot.