You are here: Home \ Community \ Featured Posts \ Who You Gonna Call? The Talon Ghostbusters
Community
0

Who You Gonna Call? The Talon Ghostbusters

This October, the Talon decided to send two brave staff members, Saya Chhabra (’18) and Maya Guerrero (’18), into uncharted territory– ghost hunting. Maya: I’m terrified of ghosts. Anything supernatural, I believe in. I’ve never had any experiences with ghosts, but I’m confident that they’re real. It’s just a gut feeling. Saya: Ghosts aren’t real and Maya’s a wimp. — We […] 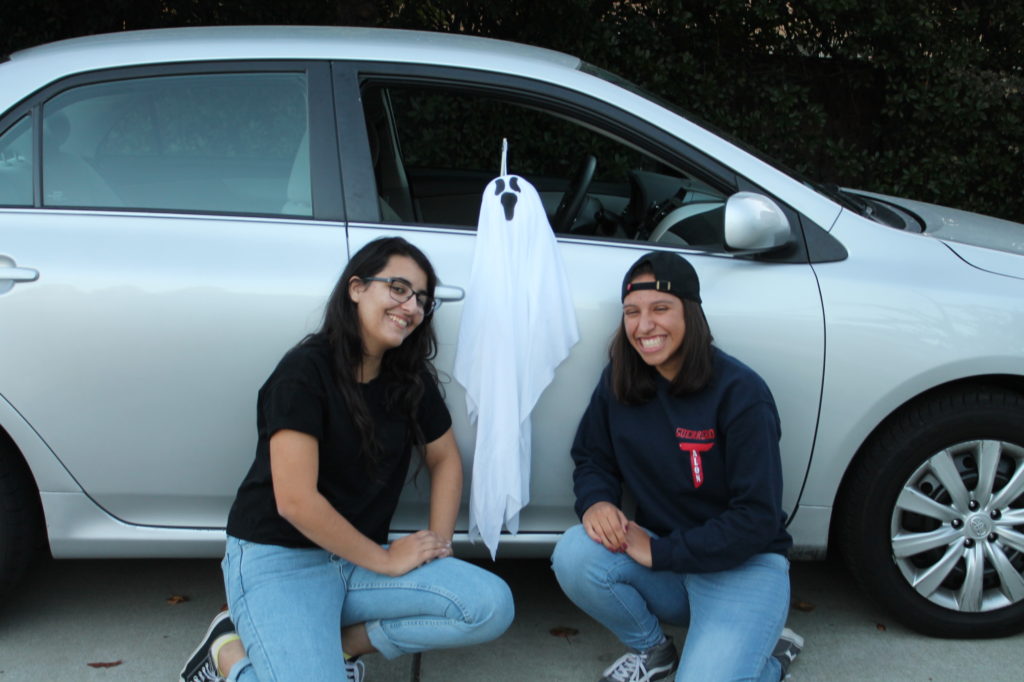 Maya: I’m terrified of ghosts. Anything supernatural, I believe in. I’ve never had any experiences with ghosts, but I’m confident that they’re real. It’s just a gut feeling.

We set out to our first location to the sound of Ray Parker Jr.’s “Ghostbusters” on loop…

Various ghosts supposedly haunt our first location– including a twelve year old girl, a railroad engineer, a firefighter and other nameless ghosts whose headstones have been broken.

Maya: It’s a cemetery, so obviously there will be some ghosts here.

Saya: I’m excited to experience the rich history here. It has 4.6 out of 5 stars on Yelp. But no ghosts.

Saya: I kind of want to meet the railroad engineer. I remember learning about him in fourth grade.

At 5:00 PM, we arrived at the Target parking lot, a block away from the cemetery. As we made the trek up the slight incline, we passed multiple parking spots directly outside and inside the cemetery. This would be our first regret of the evening.

The aforementioned twelve-year-old girl named May Woolsey was the first grave we sought out.

Maya: That grave was creepy. The fact the people are leaving toys for her is weird. Saya was getting very anxious from the afterlife energy in the air. I could tell she felt the ghost in her.

Saya: I will admit, there was a certain aura about the graveyard that had me unsettled, but I think it had more to do with the squad of goth kids that were having a picnic.

We attempted to contact May’s spirit through a spoken spell, but were ultimately unsuccessful. We felt no ghostly presence.

Next, we made our way to the tomb of Mark Hopkins, one of the railroad “Big Four”.

Maya: I didn’t know who this was, but once I found out it was Saya’s lifelong hero, we immediately tried to make contact using a candle and a summoning spell. Not just any candle either — a wine-scented candle.

Saya: He isn’t my hero, but it was really really cool to see his tomb. I was hoping that we could contact him, but was disappointed. Maybe we should have spent the fifteen bucks on a Ouija board.

Once again, no ghosts appeared, just an “I told you so” attitude from Saya.

Although Maya rated the cemetery a two out of ten on the haunted scale, we set out to our next location with the courage and hope of the original Ghostbusters, Peter Venkman and Egon Spengler.

Saya: I think this is a good time to mention that I’ve never seen the movie. 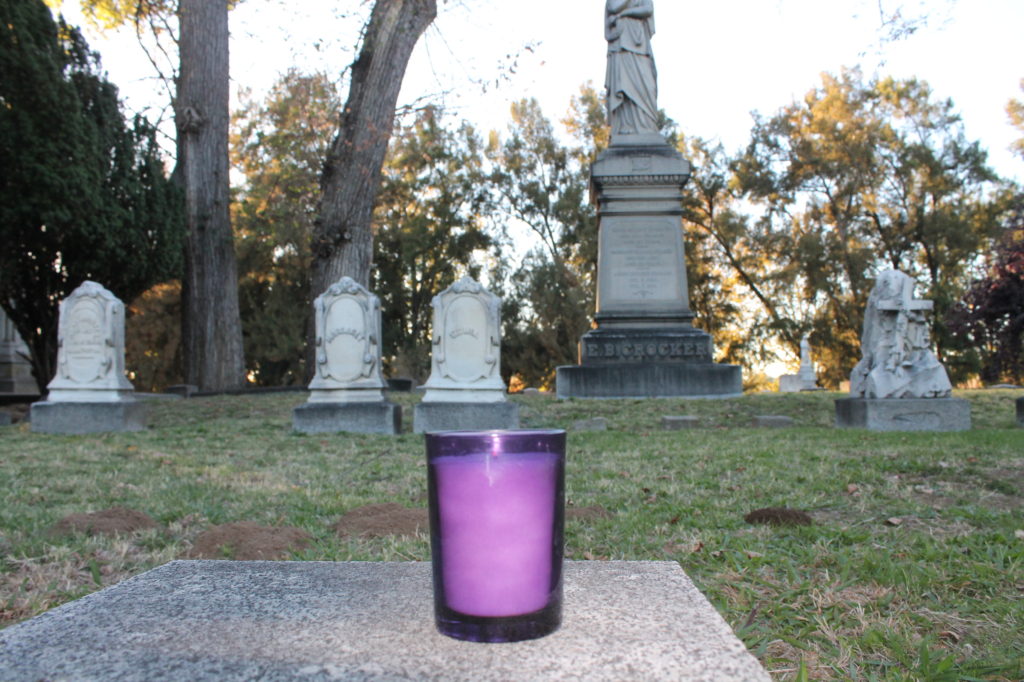 Our candle burns at the cemetery with the same fiery passion that we have for ghost hunting.

This house is said to be haunted by its former owner, George F. Cornish. Cornish fought in the Civil War along with other Union soldiers but was soon captured by the Confederate army and remained a prisoner of war for the rest of his time in service. After the war, Cornish lived out the rest of his life in the house with his family until he died of stomach cancer. The house was passed down in the Cornish family until recently. Today it is said that George Cornish can be seen in the doorway as if protecting it from the terrible Confederate soldiers.

Maya: This one I’m most scared for. I feel like it’s going to be like that scene from It when the kids go into Pennywise’s house to try and kill him.

Saya: I’m not going to lie, I’m scared about this one, but I don’t think Maya’s fears are going to be validated. I’m mostly scared of bats and rats and stuff.

Maya: I think I’m right. There’s definitely going to be bats. I kind of like bats. They’re cute!

Unfortunately, multiple “No Trespassing” signs were displayed on the property, so we were unable to enter. However, we still attempted our summoning spell/candle ritual. Although we tried to reach out to Cornish at sundown, the spookiest time of day, our quest to contact the deceased was once again fruitless.

Maya: I really thought there would be some ghosts here, considering Mr. Anderson ’07 recommended this one. But again, I was sadly disappointed. There were also no bats.

Saya: Once again, I was proven right. We found no proof of ghosts. Stuff it, Maya.

As the flame of our summoning candle flickered out for the second time, we began our journey to our third and final location. 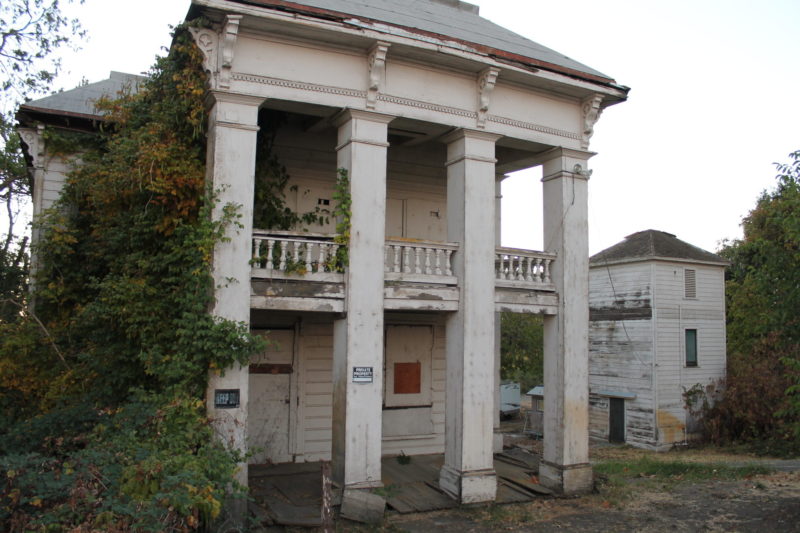 The Cornish House stands alone along the levee in Clarksburg.

Saya: So I was proven right. We didn’t see a single ghost. The only ghost that appeared was the ghost of my hope to contact a spirit.

Maya: Although we didn’t get any proof I still 100% believe in ghosts. Saya stinks.

Are ghosts real? Our evidence suggests that they are not, but although the summoning of spirits was a failure, the night was anything but uneventful.