Lunch ends and I pack up my stuff ready to finish the day and head home. I head over to the trash cans near the Rose Garden, and like clockwork, the results always disappoint me. The garbage can is always overflowing with soda cans, paper plates, and brown lunch bags. Now what do all these […] 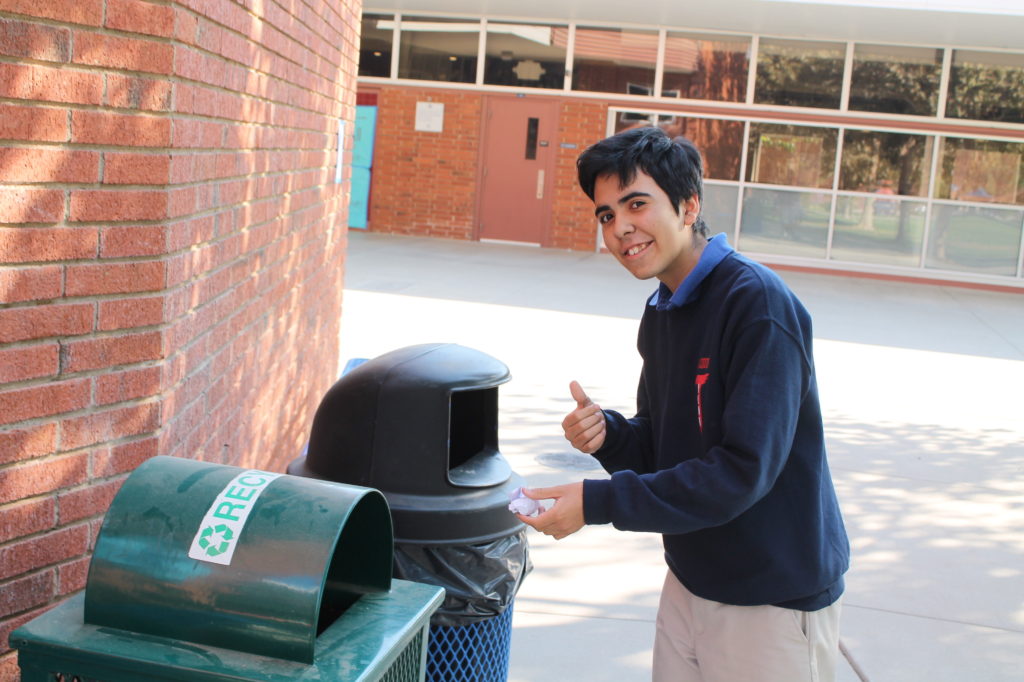 Lunch ends and I pack up my stuff ready to finish the day and head home. I head over to the trash cans near the Rose Garden, and like clockwork, the results always disappoint me. The garbage can is always overflowing with soda cans, paper plates, and brown lunch bags. Now what do all these items have in common? They are all recyclable! Deja vu strikes in my classes too. Garbage cans plentiful with passed-back homework and scratch paper. Why don’t students just take the two seconds to separate their trash from their recyclables?

Global warming is becoming an increasingly important issue. We have already seen some of global warming’s effects: sea levels have risen 4-8 inches in the last century, major hurricanes are becoming more common, and ice caps have been melting at astronomical rates. 97% of active climate scientist recognize climate change as human made, and the global community is seeking to stop climate change in its tracts. The Paris Climate Accord, an international agreement to reduce carbon emission and move away from non-renewable sources of energy, was signed by all nations except for three: the United States, Syria, and Nicaragua. While the agreement was signed by former President Barrack Obama, the U.S. reversed its support under the Trump Administration. However, 11 state governments, Washington D.C, and Puerto Rico have vowed to follow through with the agreement of reducing 26% of emissions by 2025. California is one of those states. So as California vows to make the shift towards the future, how is Christian Brothers working to ride on the new wave of clean energy?

Mrs. Kelly Stafford has stacks of paper she plans on reusing lining the counters of her classroom. Infamously, a poster warning of the wastefulness of plastic water bottles is taped next to her front door. Not a single disposable plastic Expo markers can be found in her room — she opts for the metal reusable brand. The ultra environmentalist and model for a greener America is undoubtedly, the most environmentally conscious person I have ever met. In her 20 years here at Christian Brothers, Mrs. Safford has seen for herself the changes that have taken place on campus.

“We’re doing way better than when I started here, which was a long time ago,” Mrs. Safford tells me. “When I started here we did not recycle, but now we do. We have water bottle spouts at the water fountains to encourage students to use reusable metal bottles and we also use way less paper now because of technology.”

Mr. Steve Barsanti, head of campus facilities, has made improvements around CB for the last eight years to create a more environmental friendly campus. LED lights have been screwed in all across campus from the parking lots to the STEM wing. These LED lights are 75% more energy efficient and last 25 times longer than older incandescent light bulbs. Smart timers were added to sprinklers to reduce water wastefulness. The area in front of the new chapel was intentionally designed as drought resistant. Toilets were refitted to be pressurized to use less water. Almost all windows on campus are double pained to keep classrooms insulated and reduce energy use. All in all, CB is doing mighty fine when it comes to using energy and water efficiently.

“We want to talk to the administration about getting solar panels in the next few years. And, for us, that’s a huge deal. It would be substantial chunk of money, but we hope to get the ball rolling so they can consider the possibility of it.”

Undoubtedly, installing solar panels would be a monumental task. CB generates power for around 1,500 people a day — energy that keeps the lights on, the air conditioning running, and powers many other services. If we were to install these power producing cells, would the school save money or would it make a huge hole in our pocketbook?

Mr. Barsanti talked to me about the practicality of installing solar panels here on campus.

“Six years ago when we first considered installing [solar panels], the money wasn’t there,” he said. “We haven’t revisited the issue since. During our capital campaign this year, maybe we will circle around and consider the investment, but having solar panels on campus is not the only option we have.”

Mr. Barsanti investigated other ways how CB could break its electric dependency from dirty energy. During his inquiry, Mr. Barsanti stumbled across two programs offered by SMUD that generate solar energy: a leasing program and a PPA (power purchase agreement) program. These programs are for businesses that want to use clean energy, but do not want to have physical panels on site. Under these options, CB would not have to maintain or operate the panels — we would only have to pay for the energy produced by the system. These options acts as a solid compromise as CB could take advantage of clean energy sources while not having to pay to buy, install, and maintain solar panels.

Besides large investments in infrastructure, Kat believes students can generate change in other, smaller ways.

“We should try to carpool more often. People travel from a bunch of different places and all our cars create a lot of emissions that harm air quality,” she says. “Also it adds CO2 into the atmosphere. Composting at home is something I encourage. Its good because all your food waste does not go to a landfill. On campus if we had more recycling cans that would be great. We need to encourage students to recycle too.”

So while solar panels and other large infrastructure projects would make CB energy sustainable, Mrs. Safford wants us to remember that we, as citizens of the world, also need to take action in our personal lives. She believes that the biggest hurdle in the fight for a sustainable Earth lies in the mentality of the youth.

“I think a lot of it us just the mindset. Here in America we tend to want to take care of something once it happens and that makes us feel good. But to prevent something or plan for the future is not looked at as such a noble cause. And that’s why reversing the affects of climate change is not seen as a noble cause. If people saw that solving climate change is about protecting our homes, our future, and our planet then we would be much better off as a world. Young people see what is happening today to the environment and do not have hope for the future. Sadly, some will say, ‘forget about it’, but it is important for them to realize their small actions do have an impact. When you do something good for the environment, your family and friends start to change their behaviors too. And when it comes down to it, saving the environment is really about helping humanity. We need to take action now so the next generation will have a sustainable and habitable planet.”