You are here: Home \ Arts \ Featured Posts \ Behind The Curtain Of Open Mic
Arts
0

Behind The Curtain Of Open Mic

The bell rings on a sunny Thursday afternoon, signaling that it’s time for lunch. Students stream onto the lawn and into the cafeteria, and the sound of laughter and conversation swells across campus. However, I duck into room 102, where the Open Mic Club is only just starting to get down to business. 15 people […] 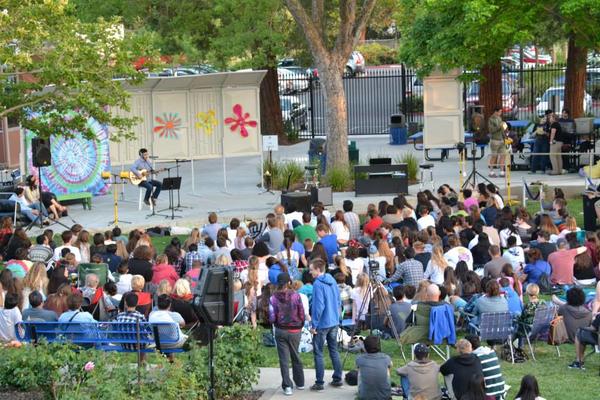 The bell rings on a sunny Thursday afternoon, signaling that it’s time for lunch. Students stream onto the lawn and into the cafeteria, and the sound of laughter and conversation swells across campus. However, I duck into room 102, where the Open Mic Club is only just starting to get down to business.

15 people are arranged in a semicircle, already discussing the upcoming show. Two juniors across the room eagerly describe their vision for the decorations, while the people in front of me compare which acts they are looking forward to the most.

Bella Arriaga (’18), a coordinator of the club, runs in late, handing me, a guest, a cupcake.

It’s my first Open Mic meeting, but I don’t feel a bit out of place.

Led by Bella, Gigi, and David Karalli (’18), who completes the coordinator trifecta, the members of the club begin to designate decoration responsibilities. Expecting to see a lack of volunteers, I consider raising my hand, ready to pick up the slack. But to my astonishment, the members of the club begin offering their services with a sort of passion I didn’t expect to see.

“I love it because we can give people a chance to show their talents,” gushed Gigi.

The club consists of a diverse variety of students — freshmen chat with seniors as the meeting goes on. The members of Open Mic might not fit a certain mold, but they have a passion for the club.

“I’m passionate about it,” said Bella. “I’m too invested in it. I’ve shed blood, sweat, and tears for this club.”

Despite how fulfilling the club is, running it is a huge commitment.

“We have to figure out the skits, the performances that are going into the show, the order of performances, and how the show is going to be collectively,” Gigi said. “A lot of people just show up for auditions expecting to just be in the show when we have thought about our shows and how we want them to be.”

The coordinators agree that their hard work is often underappreciated.

“It really is [overlooked], because there have been times that I’ll be at school until 5:30 painting, and to have people see the finished product without knowing how many hours of work went into it makes me feel like they don’t appreciate how much work we do,” confessed Bella. “We can be decorating thirty minutes before the show, putting wet paint on the walls.”

“People will tell us that they didn’t enjoy the show, and when that happens, we feel kind of underappreciated,” added Gigi, her sunny smile drooping.

The negativity takes its toll, but in the end, the Open Mic members can ignore it and focus on their love for the club.

“I have done a lot for it,” Bella interjects, and Gigi laughs. The somber moment has passed, as it always does in Open Mic.

As I bid them goodbye, Bella and Gigi urge me to come help them with decorations and go to the show that weekend. I pause and consider it, because I know that I will always be welcomed at Open Mic.