Brring. Brring. Brring. The blaring sound of that unforgettable CB bell rudely interrupts the lively conversions to commence the start of a student stampede through the halls as people of every grade try to hurry into class before the second bell sounds. With only five minutes to make it from classroom to classroom, there is […] 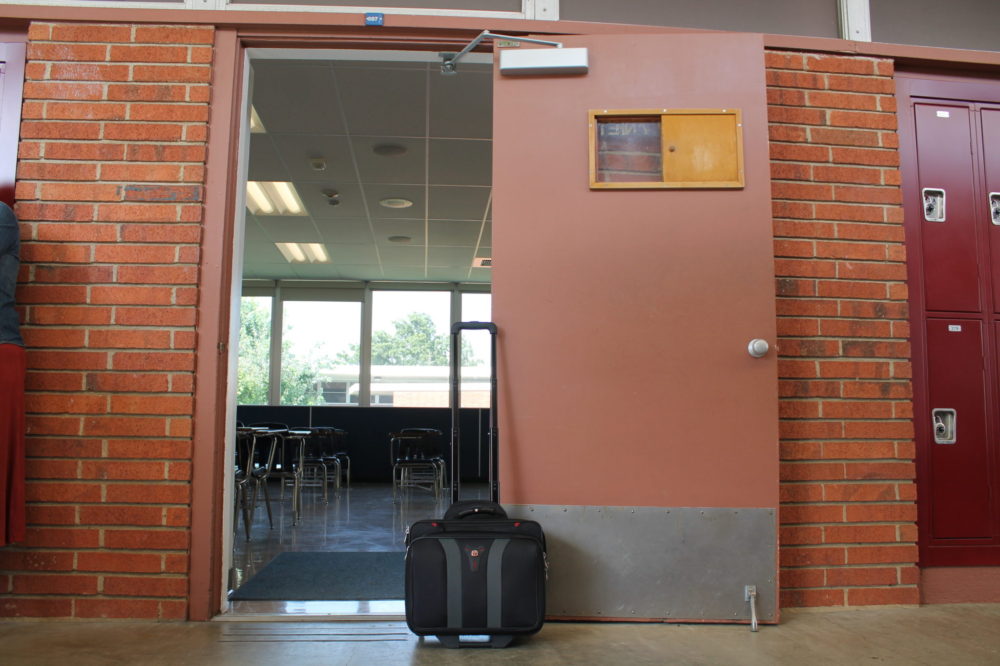 Brring. Brring. Brring. The blaring sound of that unforgettable CB bell rudely interrupts the lively conversions to commence the start of a student stampede through the halls as people of every grade try to hurry into class before the second bell sounds. With only five minutes to make it from classroom to classroom, there is no time for pleasantries with your friends. But students aren’t the only ones rushing to class. More often than not, teachers can be seen pushing their way through the halls to get to their next class as well. But why is this? Why are the teachers not already in their own classrooms? Why are they rushing through the halls like students?

For those of you with an observant eye for your surroundings or just basic common sense, you have realized that teachers who are constantly on the move switch classrooms. With this annoying, yet necessary ritual going on at CB for some time, it’s time the Talon explored the complex world of teachers sharing classrooms.

While the majority of teachers have classrooms all to the themselves, the unfortunate few must share or switch rooms. This should be unsurprising with a teacher staff of 73. but a limit of 57 rooms. Although only a small portion of teachers actually use multiple classrooms throughout the day, their between class movements greatly affect their students and fellow colleagues.

“There’s a frenzied feeling all the time about the day…kinda like a student, I’m moving to the next space,” explains Ms. Annette Romani, a math teacher with three different rooms. Like many other math teachers, Ms. Romani isn’t the only teachers zooming in the 600s hall to get to class.

According to Ms. Kelly Safford, the math department has been switching classes for a long time. Ms. Romani says the department “seems to be the most heavily impacted.” But unlike Ms. Romani, Ms. Safford only has one room but willingly shares it with other teachers who need to teach class in Room 611 or simply just need somewhere to be during a free set.

This is where the dilemma falls into place. While some teachers such as Ms. Saffford have only have one room, they still need to relocate during their free sets to make room for other teachers who have to use that room for class. This defines the teacher sharing/switching rooms complex. Teachers who share classrooms mainly only have to leave their classrooms for other classes to come in and have another teacher’s desk in their room while teachers who switch are those ones roaming the halls with rolling carts and travel bags to get to their next class. The small bags/carts force teachers to only teach with the essentials, which forces them to plan ahead and be organized. The process of switching/sharing classrooms is difficult, but deciding who is going to do this task is even more so.

“We try to arrange it where it’s least impactful on that teacher. But it’s not always perfect,” explains assistant principal Mr. Dave Desmond ’94.  Mr. Desmond is the one who enters the teachers’ schedules into the system over the summer, but the decision is not an one man job. Teamed up with the principal and department chairs, the administration ferociously works on figuring out who has to share and who has to switch.

Asking questions such as “‘Is this best for the teacher who will then serve the students the best? Have we taken things into consideration? How does this fall out in a seven-day cycle for this teacher? Do they have a break in-between to make the transition more smoothly?’” helps administration make their decision.

But again, it’s not a perfect system. To break it down in more mathematical process, science teacher and roving instructor Mr. Kevin Scully has gladly told the Talon how those five minute transition periods usually go. 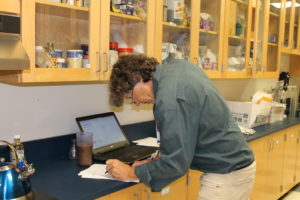 Mr. Scully working at his “desk” during his free set

Even if a teacher is on time for class, it doesn’t mean they’re ready.

“Some students have said that they like [teacher’s switching rooms] because they get to spend the first five minutes of class time talking with friends instead of working because the teacher has to set up and get ready for class,” Ms. Safford said.

But unlike the math department, for Mr. Scully, a biology and biotechnology teacher, switching rooms is required due to the variance of subjects he teaches and the different labs that must be performed for the different subjects.

Although switching rooms is a necessity for teachers like Mr. Scully, he still claims that “when you have to pack it up and set it up and break it down and set it up…you lose some of the texture of the classroom.”

The teachers of the STEM department may seem the most affected by the switching/sharing rooms condition because of their enclosed quarters, but actually all departments do it. The open halls of the 100’s to 400’s allow more open space for teachers to move more swiftly instead of having to weave their way through students.

“I like seeing different parts of the school. I like the fresh air and traveling light… I see more people, more former students during my day and I like that,” explains treasured English teacher Ms. Maureen Wanket. For her first time having to share rooms before at this school, Ms. Wanket has been adjusting nicely to having to move from the junior hall to the senior hall to the language hall and over again. As department chair and a full time teacher, moving classrooms would seem been another obstacle on her endless journey. But anyone who knows Ms. Wanket knows she has always had a unique perspective on classrooms.

“Every room is my students’ classroom. I’m just there to do my job. I never considered, even when I just taught in one classroom all the time, I never considered it my room. Our school belongs to the students, not to the teachers,” Ms. Wanket boldly states. This idea of a students’ classroom makes sharing classrooms seem like less of a problem and more of something that just needs to be done due to limited space.

As the school population continues to grow, but the physical layout remain the same. It’s a reasonable to assume that more teachers will eventually have to share rooms. More sharing also means more struggles for our teachers, but nobody knows what the future will hold. Mr. Desmond says the administration is “constantly re-evaluating on how we use our classrooms and why we use our classrooms.”

Although he is a man of science with a knack for problem-solving, Mr. Scully has suggested to the Talon that a solution would be to add an extra minute or two in transition times between sets that are back to back. This could work, but would either make classes shorter or our school days longer. Despite all efforts from administration and teachers, the sharing/switching rooms predicament is messy. But in the end, it is all done for the students. All the sacrifices and struggles of switching and sharing rooms is done for us. The foundation of our school is built on backbones of our teachers as they attempt to better our education. Even our own assistant vice principal, Mr. Desmond acknowledges our dependency on teachers.

“It makes me very proud to be at a school where teachers are willing to do what’s best for their students,” he says. “There are many instances of teachers who have accepted teaching in multiple classrooms with such grace and gratitude and them making it about the students that they encounter on a day to day basis. We couldn’t do this without them.”