You are here: Home \ Arts \ Featured Posts \ To See Or Not To See CB’s Hamlet
Arts
0

To See Or Not To See CB’s Hamlet

Set in Denmark late middle ages, Hamlet, the prince of Denmark, returns home from school to attend his father’s funeral and comes to find his mother married to his uncle, Claudius. Hamlet decides to commit himself to avenging his father’s death. A  few centuries and countless adaptations later, the Christian Brothers theater department has decided […] 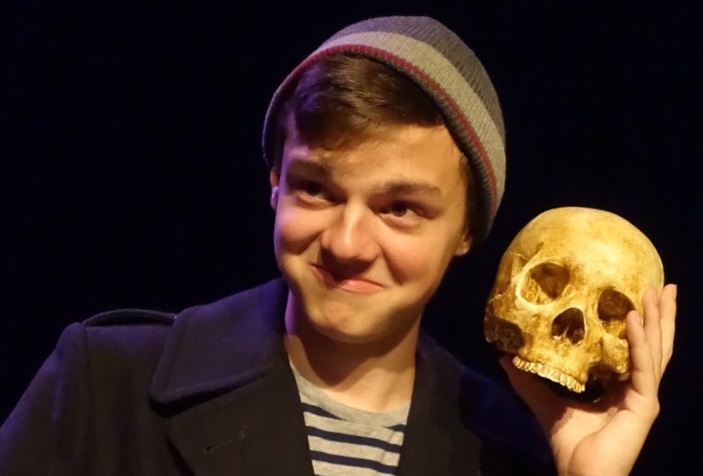 Set in Denmark late middle ages, Hamlet, the prince of Denmark, returns home from school to attend his father’s funeral and comes to find his mother married to his uncle, Claudius. Hamlet decides to commit himself to avenging his father’s death. A  few centuries and countless adaptations later, the Christian Brothers theater department has decided to take its own spin on it.

Although everyone loves to watch the final product, most people do not realize it takes a lot of work to choose a play. When selecting Hamlet, Theatre Manager Ms. Heather Christianson (’01) had to first make sure it was CB appropriate and secondly that students will really benefit and learn from doing it.

When asked why she chose Hamlet, she responded “you do Hamlet while you can” because of the level of talent and dedication in the theater at the moment, which she said may not come around for another 20 years. It was also about a matter of originality; the two directors wanted to do a play that most schools were not doing, and Hamlet is certainly not a production that numerous schools are attempting.

It is particularly unusual to see Hamlet done at the high school level, mainly because of how demanding it is. In the spring of last school year, there was an initial casting where major roles were given because the directors acknowledged the amount of work these students would have. The auditions gave the students the opportunity to play an array of different characters, and then the directors decided which student will the play the characters for the show. This gave the chosen students the entire summer to get a head start on memorizing their lines.

The main rose of Hamlet was given to Jacob Cherry (’18). He says that Hamlet is “one of the most iconic and complex characters in literature”. Despite the difficulty in playing something as big as Hamlet, Jacob says it is “exciting and really a great opportunity” for him. Jacob describes Hamlet the character as “psychologically troubled, suicidal, and frustrated with his outlook on human nature”. He acknowledges the challenges of bringing such a complex man to life, but hopes to bring the character justice.

Luckily, we have our own Shakespeare aficionado on campus, Ms. Mary Bowers, who holds a masters in Shakespeare studies from the Shakespeare Institute in Birmingham, England. Jacob has gone to Ms. Bowers numerous times in order to get some interpretation advice. When asked what her thoughts on the choice to do Hamlet she responded, “it’s incredibly ambitious” but believes the theater department can pull it off because both the plays and musicals at CB have been “above and beyond what most high schools are capable of.”

“Some students are going to create performances I’m  going to remember for all the right reasons for a very long time,” she says.

Of course it would not be a CB production without our own little spin on it. Hamlet trades in his tights for a more modern looking suit. Ms. Christianson describes Hamlet as being its “own world that is chic and dark”.

Opening night is Veteran’s Day weekend November 10 and will be open the weekend following as well. Jacob promises a really cool set, great cast of actors, compelling drama, and a little humor. Even if you have already seen an adaptation of Hamlet or have no interest in Shakespeare, you should come see the play because the CB theater has many great things to offer. But don’t worry, this is not a four hour production — you will be in and out of the CB theater in just two hours and get to see a quality performance by our fellow Falcons.