While Spotify’s Discover Weekly and Release Radar playlists are great for finding new songs to listen to, nothing compares to swapping a record or two with a good friend. There is something to sharing musical experiences with people as opposed to finding music shot out of an algorithm. So I went out on a quest […] 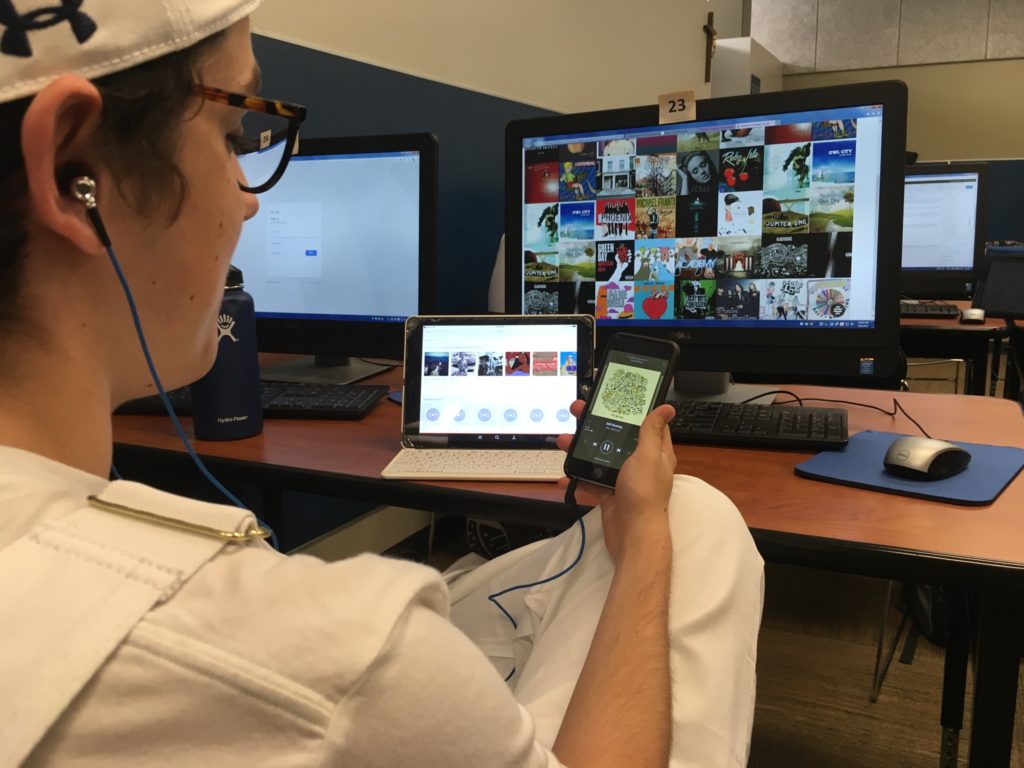 While Spotify’s Discover Weekly and Release Radar playlists are great for finding new songs to listen to, nothing compares to swapping a record or two with a good friend. There is something to sharing musical experiences with people as opposed to finding music shot out of an algorithm.

So I went out on a quest — a quest to find some cool music CB students and teachers are listening to. The coolest part? All songs are in a Spotify playlist that is linked at the bottom of the page. Happy listening!

“The vocals give off warm and happy vibes. Makes me think of happy summer times.”

“Everyone knows the lyrics so you can sing with friends. Medasin ties rap music with chilled beats in an expert way. An absolute banger.”

“Coachella – Woodstock In My Mind” by Lana Del Rey

“I really love how her voice sounds so melodic and how creative and original all of her songs are.”

“I like the intro to the song and how it flows. The melody and lyrics are really catchy.”

“Jump Out the Window” by Big Sean

“[I love] the beat and the way the song flows.”

“The hype of the song is great.”

“Roll the Bones” by Rush

“It’s a rock song but it’s really got a modern pop vibe.”

“It’s like a good time blast up with the windows open kind of song. It puts you in a summer mood.”

“Reminds me of Sacramento.* It’s a super energetic song.”

“[There is a] great message about being confident and that you really don’t know what is going on in someone’s life.”

“There’s Something Special” by Pharrell

“Most artists today in Pharrell’s genre are explicit or inappropriate,but he managed to create a song that had both good meaning and a good flow.”

“It has a catchy beat and counting in it which is good for my education.”

“Some Minds” by Flume

“It’s super chill throughout the song and it gets hype at the end but not how you would expect it to sound.”

“There Will Be Time” by Mumford and Sons

“I love how this song starts off in a different language but it’s still super upbeat.”

“Don’t Take the Money” by Bleachers

“This is one of my go to sing in the car songs. I love the beat and it’s really fun.”

“[There’s this] sense of anticipation that something wonderful will happen if you can believe in it. I like that.”

“Harvest for the World” by The Isley Brothers

“[This song] was my jam when I was a little kid. It’s mournful and hopeful. Brings you back.”

“Blow the Whistle” Too $hort

“It thumps, man. It’s fun music. I recently rediscovered this song and I can’t get it out of my head.”

“The Conversation” by Hank Williams Jr. and Waylon Jennings

“It’s definitely more blues and rock than country. It’s a beat you can move to. My mom used to play this kind of music when I was a kid so it brings my back to those days.”

Hide your mothers… this playlist contains explicit content. And make sure you listen in order, not on shuffle. Spotify Playlist