Seniors On Stage Turn The Page

CB is famous for its impeccable theatre talent. From the fall play to One Acts to the spring musical, these shining stars work their butts off to make sure that the show is done to the best of their abilities to entertain the whole CB community. But as it comes to the end of the […] 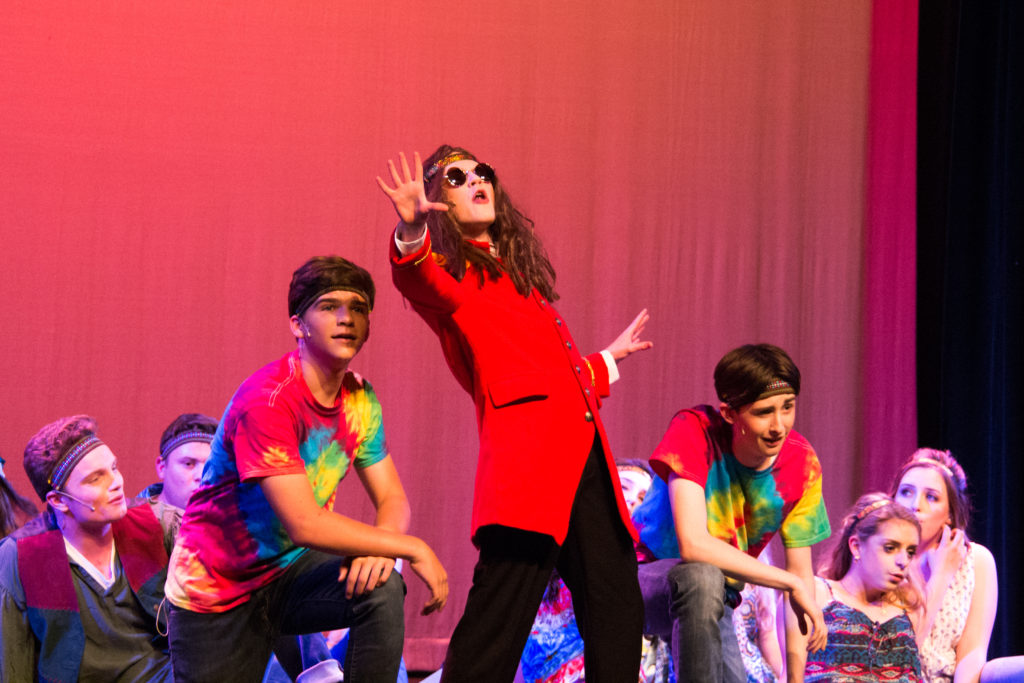 CB is famous for its impeccable theatre talent. From the fall play to One Acts to the spring musical, these shining stars work their butts off to make sure that the show is done to the best of their abilities to entertain the whole CB community.

But as it comes to the end of the four years of high school, what will become of these talented folk as they head their separate ways across the country to college?

Ian Ferrell (’17) is one of the most recognizable theatre kids, and not just because of his noticeably short stature that can be easily identified on stage. He has participated in every opportunity to be part of the theatre program, from acting in the fall play from his freshman year on to writing and directing One Acts to his last hoorah this year in the spring musical Sweet Charity.

Ever since he was a toddler, he has always enjoyed entertaining people.

“[When I was little,] I never did plays with a school or theatre company, but my sister would write, direct, and organize plays with the kids in our neighborhood, and we would perform them in our backyard,” he reminisced, “I played the princes in my sister’s renditions of Cinderella and Snow White, as well as the hunter and Doc in Snow White.”

His real interest began when he was in middle school when he got the opportunity to take “Readers Theater” classes. Those classes inspired him to explore theatre in high school.

In his words, he “got bit by the theatre bug” freshman year when he was cast in A Midsummer Night’s Dream.

He cites the community as one of his favorite parts of being a part of theatre as well as the influence his performance can have on the lives others beyond just entertaining them.

“Earlier this year, I performed in a musical that centered around the suicide of a teenage boy, and it covered several other serious topics concerning modern youth,” the senior said. “After a performance, we heard from one teen in the audience who had been experiencing serious depression that the show had inspired her to speak up and find help for herself.”

“This moment made me and the rest of the cast realize just how powerful theatre can be. That is what I love most about theatre — its ability to change those experiencing it.”

And there is good news for those who never got to experience Ian’s tremendous talent — he will be pursuing it in college. In the fall, he will be attending Southern Oregon University in Ashland, Oregon as a theatre major.

“Theatre is a career I can really see myself in, whether it’s writing or acting for stage, film, or television,” he states.

He added that he also “really wanted to expand my horizons, so I wanted to gain more experience in the writing and directing field of theatre. In the professional world you can audition for as many shows as you like, but when auditions don’t always work out, you’ve got to create your own work. And the best way to get all this training early on was through a college theatre program.”

Another member of the senior class deeply involved in the theatre community is Gabrielle Airola (’17). She was actually introduced to the theatre by Ian.

“I was best friends with Ian Ferrell, who always raved about how amazing CB theatre was, so spring of sophomore year I decided to give it a try,” she states.

She has worked on and off the stage since then, even serving as Assistant Stage Manager for this year’s spring musical Sweet Charity.

Her favorite part of being in the shows is being able to watch it progress and transform from the beginning stages of rehearsal to opening night and beyond. Similarly to Ian, she also cites the community and family feel between the actors, actresses and crew as a lovely piece of being a so called “theatre kid”.

She will also be pursuing a theatre major at the University of Nevada, Reno this fall, except her focus will be more behind the curtain. Her choice in major allows her to place a focus on design and technology.

“I found what I love to do and hopefully I can someday make a career out of it,” she stated.

So whether our beloved theatre seniors are on stage performing musical numbers, delivering emotional monologues, a cracking a few jokes here or there to get a chuckle out of the audience, or setting up lights and doing everything they can to make sure the show runs smoothly for everyone, they should be celebrated for finding something they love and sticking to it.

They have talent beyond measure, and will be greatly missed in all aspects of theatre next year and beyond.