Sneezing. Itchy eyes. Coughing. All the works. Sacramento is known as The City of Trees, which comes with its pros and cons. You get the beauty of living in a city that fully immerses you in an almost secluded feeling. During the season of fall, the trees start to change and scatter the ground with […] 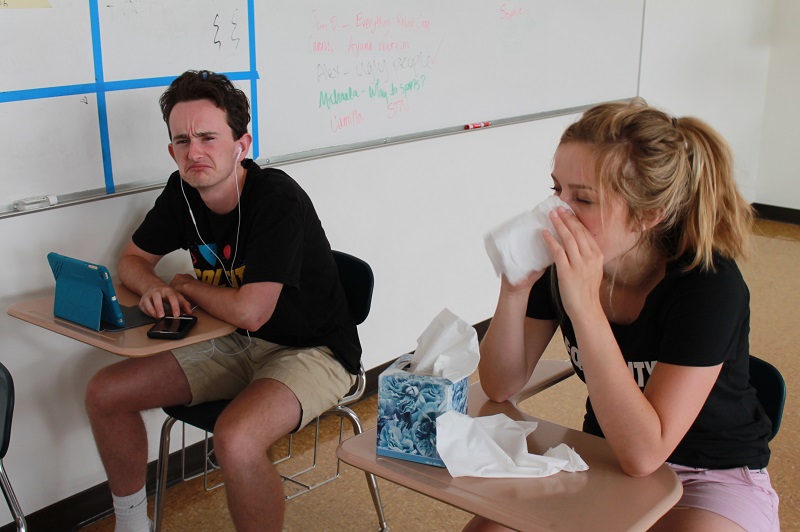 Sacramento is known as The City of Trees, which comes with its pros and cons. You get the beauty of living in a city that fully immerses you in an almost secluded feeling. During the season of fall, the trees start to change and scatter the ground with orange and yellow leaves, which can be an amazing sight to see…if you don’t have allergies.

One of the biggest cons of living in Sacramento is when spring rolls around, the trees blossom, leaving those with allergies to stay in their houses, unable to enjoy the nice weather. Unluckily for most people, they have to leave their houses to go to school and work. The Talon searched out those who suffer from allergies and asked them a few questions about how they cope with this daily struggle.

As it starts to heat up here on campus and the weather starts to change to flip flop and tank top season, some of our CB seniors are unable to enjoy our long awaited sunshine because of their terrible allergies. As Beah Cruz (’17) tells us, she has had allergies her entire life, but gradually, they have gotten worse.

“This season has been treating me very poorly and I have had them everyday so far with a runny nose and constant sneezing,” she says. “Especially with the gusts of wind that have blown through Sacramento the past few days”.

The disturbance of the wind in and around the city have not only left Beah with a red nose, but with pure and utter frustration. Beah also expressed how allergies might not annoy her as much as it annoys other in her classes.

“I think the worst part about allergies is the fact that I disturb everyone in class when I sneeze,” she says. “It’s loud and I have to go get up and get tissues.”

We all know the feeling of the discomfort of blowing our noses in front of our classmates as the teacher is trying to lecture, and those with allergies know this feeling oh too well. Jessica Cooper (’17) also suffers from allergies, but not just in the spring.

“My allergies are somewhat year-round, mostly just in the spring, fall, and winter, but not normally in the summer”.

Even though Jess suffers mostly in the spring months, she has to cope with the constantly linger her allergies.

Nick Hilton (’17) also was tearing up, but not because we are in the final weeks of school. His allergies have also been a struggle for him during the blooming season and he didn’t hold back on the way he felt about Spring.

“The worst part about allergies is that you feel sick all the time and you can’t do anything about it,” he says. “The thing I hate most about it is sneezing all the time and my eyes constantly watering. I try to treat it with allergy medication, but it doesn’t really work. Spring is the worst… it honestly just [stinks]”.

Nick, Beah, and Jess all agreed that coming to CB on a windy day is not the easiest of tasks.

“The trees at CB definitely affect me because of all the pollen and windy days only make it worse,” Jessica said as the wind started to pick up again. Her puffy eyes and sniffling nose showed how much the windy days on campus affected the way she felt.

When they were all asked the questions of how CB could make their worst days better they replied with a simple answer — tissues!

“I think CB should get quality tissue boxes with a name brand with maybe some two ply and lotion,” Beah said with just a touch of sass.

“I think that CB can definitely help those with allergies by providing more tissues in the classrooms because I know that multiple times a day in multiple classrooms, I have to ask to go to the office to get tissues”.

CB does have a one of a kind campus surrounded by trees that provide students with shade on a hot All School Lunch, but they also can cause those with allergies to need a few extra tissues in the classroom.

Sacramento can be one of the finest cities on earth to live in, but depending on the season and the area you’re surrounded by, the City of Trees may be too hard to see in the Spring with teary eyes.