It’s been a long and boring Sunday night. You finally close your math book after finishing boxing your answer on your weekend homework. You glance at the clock: 7:30 P.M. “Wow,” you think, “guess it’s time to get some dinner now.” Your mom’s out to dinner with her friends and you know your dad can’t […] 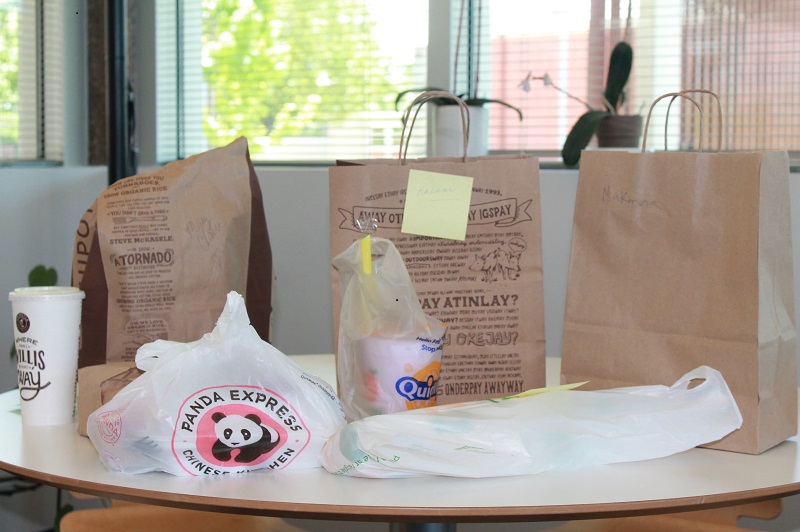 It’s been a long and boring Sunday night. You finally close your math book after finishing boxing your answer on your weekend homework. You glance at the clock: 7:30 P.M. “Wow,” you think, “guess it’s time to get some dinner now.”

Your mom’s out to dinner with her friends and you know your dad can’t cook, so you head to the kitchen to see what you can scrounge up for dinner.

Nothing but moldy bread, some nasty apricot jam, and chunky peanut butter are in your pantry; ok, let’s check the fridge… and empty. Well, looks like you’re starving tonight.

But wait! You remember some app called Postfriends? Doormates? FoodieEats? What was the name again? Hmm… oh that’s right, Postmates!

CB seniors have been making avid use of this trending app, ordering any food their stomach desires. Want some orange chicken from Panda Express? A yummy California burrito from Oscars? Postmates can make that happen.

So how exactly does this handy process work? And are those hefty delivery prices really worth the cost? The Talon spoke to several CB students to get the lowdown on this convenient app.

Postmates doesn’t hire just anyone to be a driver. Postmates employee Ryan Murphy (’17) knows all about the precautions the app takes to have the best and safest delivery service possible.

“First you have to sign up and do a background check. Then it’s kind of like Uber, where you can go on whenever you want to work,” explained Ryan. “Midtown is the main place for orders. So as driver, you just accept the order, pick up the food, and then deliver it.”

Committing to hours for a job can be really difficult with a tough schedule. So that’s why Nick Hilton (’17) decided to look into becoming a Postmates deliveryman.

“I decided to deliver for Postmates because it’s a really easy job to get and you get your own hours.”

Ryan also had the same idea in mind when he decided to apply as a Postmates driver.

“I can work whenever I want, so it’s pretty convenient. I was looking to make money, but I don’t have time for a real job. It was pretty much the simplest thing.”

You would think that running around town all day delivering food to “hangry” customers might get a bit annoying, but Nick and Ryan don’t really seem to mind.

“I enjoy it,” confessed Nick. “It’s basically just me sitting in my car listening to music. Then I just deliver people their order and get paid for it.”

“It’s a fun job,” Nick continued. “Plus it’s not boring like some other jobs.”

There is one downside to being a Postmates driver, but Ryan found a way to make it bearable.

“Sometimes it’s annoying sitting in traffic all day, but I just listen to music so it’s not too bad.”

Now that we know a little of the behind the scenes, it’s time to see whether or not this app lives up to its expectations. Frequent Postmater Michael Castaneda (’17) has only good things to say about the app.

“Honestly, I think Postmates is worth it,” he says. “It’s really good since we don’t have an open campus for lunch. That way I can get whatever food I want for lunch instead of bringing a boring sandwich from home or getting food from the cafeteria.”

There might be some bias in his opinion, but Nick thinks that Postmates lives up to its hype. Especially when you’re in a sticky situation for food.

“During STN, when my roommates and I were down in Anaheim, we were unable to leave our hotel. So we were able to get Taco Bell delivered to our room for the normal price we would pay plus five dollars more for the delivery charge. It was really cool.”

Peter Levis (‘17) might not understand all that Postmates is about, but that doesn’t mean he hasn’t taken advantage of the life-saving service Postmates has to offer.

“I don’t really personally use it that much because I think it’s only for lazy people,” confessed Peter. “But it can be useful at times. One time I forgot a lunch for my San Francisco field trip to the art museum, so I Postmated food for lunch to the museum and it was really helpful.”

Oscar’s and Gunther’s are frequent favorites that our CB seniors like to have delivered to them for lunch. But what are some other good places to have your food delivered from?

“I don’t think there is one specific place that’s the best to order from,” stated Michael. “But the better places are the ones that aren’t fast food because fast food isn’t worth delivery — you can get that anytime. I like ordering Mexican or Asian food.”

Insider Nick knows some pretty good locations on where you should place your next order.

“The easiest place to have food delivered from Postmates would probably be from East Sac or Midtown because there’s so many places to eat down there,” he says. “You could never go wrong with any option.”

But with Postmates, people sometimes forget that they have to pay a delivery service added on to the price of their order.

This extra fee often leaves customers like Michael annoyed with how much money they are paying for their order.

“I think the only time the prices are fair is if you have discount codes for cheaper delivery. Otherwise it is kind of a rip off if you don’t use the promo codes to give you the free delivery charge.”

Contrary to Michael’s feelings, Peter understood why the delivery prices end up being so high.

“The prices seem fair because the drivers have to make some profit from driving around. They have to pay for that gas money somehow.”

Overall, there are pros and cons for using the Postmates app. The app is definitely worth it if you’re looking into having job that will give you flexible hours. But if you’re a customer, you might want to check that bank account one more time before placing an order.