You are here: Home \ Falcon Sports \ Featured Posts \ What’s With All The Racket?
Falcon Sports
0

What’s With All The Racket?

Christian Brothers has many of the most successful high school sports teams in the Sacramento area. We have brought back countless section championships and even advanced to win NorCal titles in the past. However, while a few of our sports teams are locally famous, some of our other sports teams are hidden in their shadows. […] 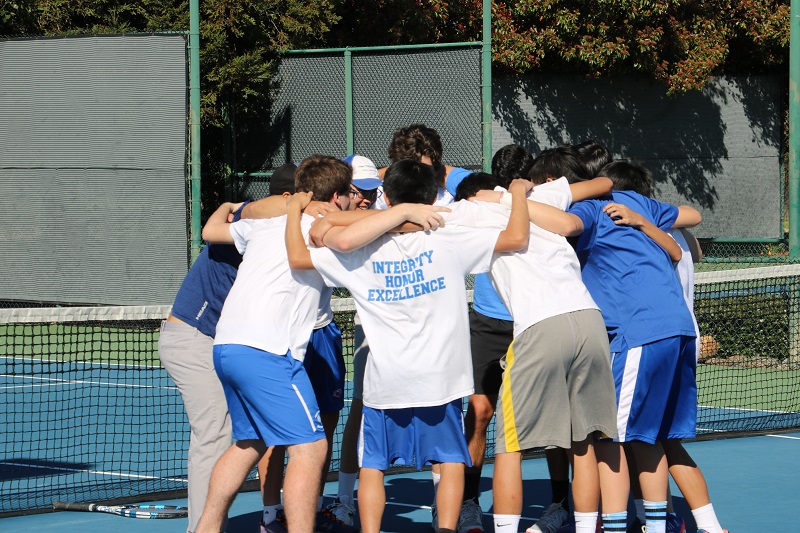 Christian Brothers has many of the most successful high school sports teams in the Sacramento area. We have brought back countless section championships and even advanced to win NorCal titles in the past. However, while a few of our sports teams are locally famous, some of our other sports teams are hidden in their shadows.

A mystery to some, Christian Brothers men’s tennis team has been quite successful in recent years. Last year, the team even made it to the section finals.

Though men’s tennis athletes are not campus famous, the players put in as much work as other athletes and love what they do.

Noah Wadhwani (’17) shared his personal connection to the sport.

“I’ve been playing tennis for six and a half years now. I originally started playing because of my dad actually. He kinda got me into it.”

He enjoyed the sport so much that he decided to put more time and effort to perfecting his talents.

“My love for the sport just took off and it became my main sport a few years after I started playing, and I began to dedicate pretty much all my time to it outside of school.”

Fernando Gil (’17) started playing at a young age to.

“I have been playing for six years. I started playing club tennis at Park Terrace with [Noah].”

As both players grew up, their love for the sport grew with them.

“I absolutely love tennis,” Fernando shared excitedly. “It’s honestly just a really good time. We have a wonderful coach, and the teammates are all really friendly. It’s not even about the competition, it’s more about being there and playing with everyone”

And their hard work pays off. Twice a week men’s tennis team competes at Laguna Creek Racquet Club hoping to bring home a W. They compete against teams like Rio Americano, El Camino, and Vista Del Lago — our unofficial rivals.

There are currently 13 people on the CB team, 12 match players and one exhibition player (an extra player).

“It would have been nice to have a bigger team so that we could have more power at the ending half of our lineup, but I’m really happy with how the team has played throughout the season,” Noah tells the Talon. “We are doing well….and we have been getting better overall which is important”

This year, the men are currently 3-4 in league and 4-7 overall. The boys beat El Camino, Casa Robles, Kennedy, and Vista Del Lago earlier this season. As the season is coming to a close, the players look to extend their wins by dominating against El Camino for the second time this year.

Unfortunately, because Laguna Creek is far away and the tennis team often flies under the radar, the CB student section of cheering fans is small. When the team brings home a win, there is little to no celebration.

But Noah and the other players have a good sense of humor.

“The kids on the tennis team always have kind of a running joke that whenever we win we’re like ‘What?! CB has a tennis team?'”

Since tennis doesn’t exactly draw the greatest crowd, the players are eager to spread the word about their sport. Many players just want others to know that the sport is interesting to spectators.

“One thing I would want people to know is that it is more fun to watch than you’d think….especially watching other people at the matches because their heads move back and forth with the ball, and it’s really funny,” Grant Gudmann (’18) adds with a chuckle.

Mostly, the tennis athletes just want to be acknowledged and appreciated for the work they do for Christian Brothers athletics.

“I think the main thing I’d want people to know is that we do exist, we are good, and we do like to compete,” Noah says. “Over the last couple years, we have been one of the more successful spring teams at CB in terms of what we’ve done in league and then what we’ve done later in the playoffs”

Noah eagerly invites everyone to witness the fun for themselves.

“If you ever have the desire just come out and support — it’s fun to watch us play! We have a lot of energy, and I think one of the best things about us is definitely our camaraderie,” he says. “Everyone on the team loves each other and so we all get along really well.”

The tennis team puts in as much work as any other sports team and deserves recognition for these efforts. As the tennis season is coming to a close, there is limited time to catch this team in action…but there is always next year!