There is a thunder-like phenomenon storming through the air at Christian Brothers High School, its echo reminiscent of the ocean water that arrived on the sandy shores of Muir Beach last Father’s Day — when a CB junior by the name of Johnny Pressey (’18) and his family first experienced the thrill of a new […] 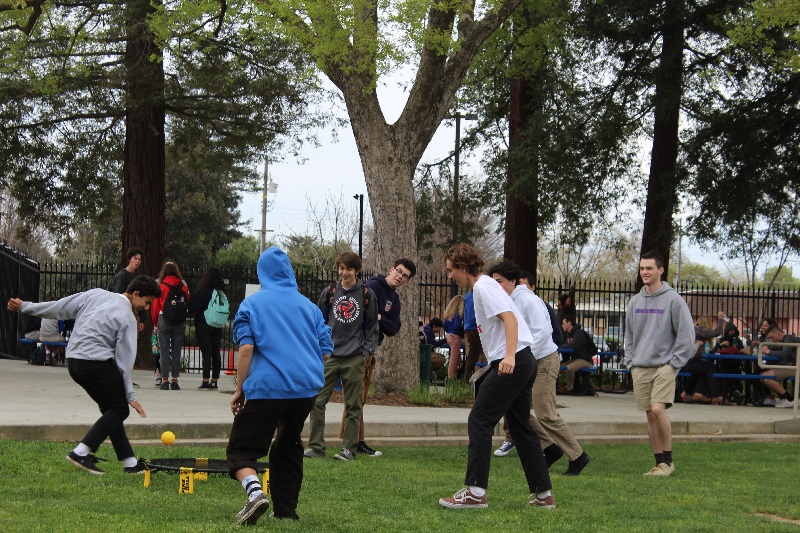 There is a thunder-like phenomenon storming through the air at Christian Brothers High School, its echo reminiscent of the ocean water that arrived on the sandy shores of Muir Beach last Father’s Day — when a CB junior by the name of Johnny Pressey (’18) and his family first experienced the thrill of a new game.

At that same hour*, senior Devon Paulding (’17) and his fellow Rally Chair Ryan Murphy (’17) stood atop the golden hills ** of Moraga, just forty-two miles inland, towering above their newly acquired territory like kings after a battle.

So when Paulding received a special gift for Christmas just five months later, it became clear that the stars had aligned in perfect symmetry for this Spikeball revolution to occur. And the revolution will not be televised, Brothers, but it is in full swing at CB.

The beautiful game traditionally follows a loose interpretation of the rules of volleyball, but it’s pretty much as simple as it sounds.

In Spikeball, players must use a medium-sized black net, tightened like a trampoline, laid out in the middle of an open space — for CB kids, the Main Lawn is nice, but the Mary Lawn would work, too. The small yellow ball is about the size of a softball, rubber, and hollow for optimal bouncing.

After a gentleman’s serve by the offense, one player on the opposing team must set up his teammate, who returns the ball to the other team. Three hits are allowed in each round after the serve, and you go with the flow from there.

The man, the myth, the legend Devon Paulding’s love and passion for the beautiful game of Spikeball was infectious during our sit-down interview.

“The Spikeball journey all aligned last summer at the Lasallian Student Leaders trip to Saint Mary’s,” Paulding explained calmly at first. “This guy from the school in Pasadena had one. It was our first experience with it and ever since then, I wanted to buy one.”

But as he continued, his excitement — the well-known number-one enemy of a Spikeball player, according to Paulding — took over.

“The stars aligned when my grandfather gave me a $75 dollars Dick’s Sporting Good gift card,” he recalled. “I was wanderin’ around Dick’s, not really finding much, and I just stumbled upon Spikeball — and I said, ‘This needs to happen.'”

“I was just waiting for the weather to turn to the positive, and once the sun came out, we were out there Spikin’.”

It’s a simple game, true, but there’s more than just the letter of the law. In this way, it’s like a combination baseball and boxing. There’s a strategic, mental aspect to it, but also a proximity to the opponent, where tempers can flare.

“It’s all about mind games, really. Because it’s a game where you’re in close quarters,” Devon says. “So if I’m talkin’ to you, you think you’re looking at me, you know who I am, you know what I mean? You’re up in their face, that’s what it’s about.”

In fact, several challenges were issued in the making of this article, including a direct attack on Talon moderator Mr. Dave Anderson (’07).

“Tell [Mr. Anderson] if he wants to get made to look like a fool, he can come out here,” Devon says.

When pushed further, Devon clarified, “Yeah that’s a challenge. Let him know. Throw Mr. [Tom] English in there, I’m spikin’ in his face. I challenge Tom English and Dave Anderson to a Spikeball competition.”

I tell him that’s on record.

“Write it down, put it in stone, I don’t care what you do. It’s happening.”

When pressed for a game that day, Mr. Anderson said he didn’t bring the right pants or shoes, though he did rave of great times spent with friends playing in Santa Cruz. Mr. English was not available for comment.

So, whether or not the challenge is accepted — Devon has spoken of a big, March Madness-style tournament for the month of April or May — you will be sure to see some of these players out there out the green grass, demonstrating the true meaning of Spikeball: love and passion for the beautiful game.

**there was probably some green