Around the Talon Newsroom, there’s been talk of a Talon Blind Date floating around for a long time, but somehow it’s never actually materialized. Essentially, the Talon would choose two random students, sponsor a date, and then write an article on the outcome. By the subtle matchmaking of nosy Talon moderator Mr. Dave Anderson […] 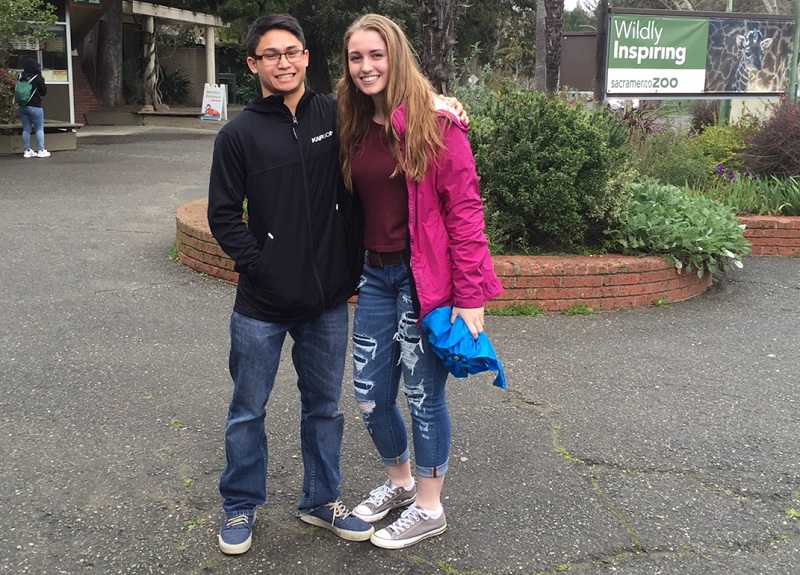 Around the Talon Newsroom, there’s been talk of a Talon Blind Date floating around for a long time, but somehow it’s never actually materialized. Essentially, the Talon would choose two random students, sponsor a date, and then write an article on the outcome.

By the subtle matchmaking of nosy Talon moderator Mr. Dave Anderson ‘07 and stealthy staff writers Alex Mantong (‘18) and Michaela Cahill (‘18), Emily Shepard (‘18) and Saej Awa (‘18) were selected to embark on this exciting adventure.

Alex: It’s 60° outside. It’s a cold, windy, and miserable Sunday. Hawaiian wrestler Saej Awa sits alone at a coffee shop, ready for two hours of blind-date fun. His hands are folded, his knee is bouncing, and he’s glancing around; still, he claims he’s not nervous.

“I’m more curious than anything,” he says, with a timid smile.

In his defense, Saej is in a very curious predicament. He’s about to participate in the inaugural Talon Blind Date, and it’s a pretty scary process. Michaela and I are attempting to execute the Talon’s first collaborative project. Basically, we don’t know what we’re doing. So Saej has every reason to be nervous…even if he says he isn’t anyway.

Michaela: While Alex and Saej are at La Bou, I’m cruising down the freeway with Emily “Shep” Shepard, listening as she shares with me her hopes and apprehensions about going on her first blind date.

“I don’t know what to expect,” she begins. “I was trying to prepare myself, like ‘if it gets awkward you can say this,’ but I don’t know who it is.”

Emily is a confident and outgoing person, yet this softball star is now at bat in a whole new ballgame. She’s trying to keep an open mind as we approach the chosen location — the Sacramento Zoo — but her thoughts keep wandering to that one big question: Who could it be?

Emily is very familiar with the concept of a blind date, yet she’s only ever been on the flip side of the situation. This social butterfly often finds herself playing matchmaker for her friends and classmates.

“On my finsta, I started this thing called ShepMingle, like Christian Mingle. I’ve been setting people up on dates, and it’s actually working!” she shares excitedly.

So while Shep knows the basics about what she will soon encounter, actually going on her own blind date presents itself as a whole new experience.

Alex: Saej is a neat guy. He likes dogs and has two. He’s an outdoorsy person but also lists playing video games as one of his favorite pastimes. Most importantly, he’s open minded at what will come out of this date.

“I have no expectations,” he says. “I like surprises.”

Saej is also super accommodating. Even though he believes that “the zoo is more for second dates,” Saej still follows me out of La Bou and into the Sacramento streets.

Despite our inexperience, Michaela and I manage to time our entrances perfectly. I arrive with Saej in front of the zoo at basically the same time as they do. It’s cool — I hear Saej hum in recognition right as I see Shep turn to whisper excitedly in Michaela’s ear.

“I was shocked yet happy,” Saej recalls. “I never thought it would be her.”

Michaela: The four of us enter the zoo with tickets graciously paid for by the Talon. Gray skies and light sprinkles linger for our entire time at the zoo. While Emily has with her a bright blue umbrella from home, Saej came a little less prepared to face the elements. He decides to buy an umbrella from the gift shop, carefully selecting a nice penguin design. 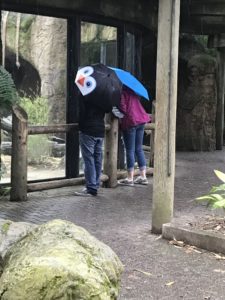 Saej and Emily waddle around the zoo with umbrellas to keep their Happy Feet dry.

Emily and Saej walk around looking at the animals, talking and twirling umbrellas as they go. There never seems to be a dull moment, but we never actually get close enough to hear their conversations.

At one point, Alex and I find a wind machine and track the blind couple down to make them try it out. It’s two dollars out of our own pockets, but seeing them crammed in the little machine and being blasted with cold air is worth the cash. 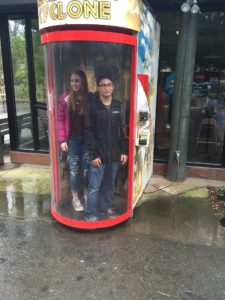 Emily and Saej are blasted with air in the Cyclone wind simulator.

Alex: It becomes apparent after about five minutes that we aren’t going to be getting close to our couple without making it awkward. There aren’t that many people at the zoo on account of the weather, so we can’t blend in with any crowds. We also have bright purple and blue umbrellas, which don’t exactly help since we’re supposed to be undercover. Saej and Shep don’t have to look hard to catch us following their every step.

We do have a few opportunities where we are able to spy without them noticing, but these moments are fleeting and we never get close enough to hear their conversations. So after around an hour of failure, Michaela and I give up and hide in the zoo’s restaurant to warm up and talk about the logistics of our article. After all, this is the Talon’s first collaborative project.

Michaela: After almost two hours of traipsing around the freezing zoo, the four of us meet back at the gift shop. Everyone feels cold, and since all of us have had our fill of animals, no one objects to a trip to Starbucks to warm up and chat about the events of the day. We walk out through the turnstiles and part ways to drive to the coffee shop: I go with Emily and Alex with Saej.

On the short ride over, Emily and I talk about how things have been going thus far.

“It was fun because I feel like a lot of the guys [that] I’m friends with — and that people would set me up with — I already know…So it would just be like hanging out with them again, but it was interesting going with someone who I didn’t really know.”

Although Emily and Saej have had a few classes together since freshman year, she had never really talked to him much aside from the occasional question about a due date or project.

“I think he’s kinda shy in a classroom setting, but meeting him outside of a classroom was different. He wasn’t as shy as I expected…He was starting all the conversations.”

Before the date, everyone in on the little secret had been sure that Emily would be the more talkative of the two, but the surprisingly chatty Saej proved us all wrong. Throughout the course of the zoo date, the brave Shep even felt comfortable enough to share with Saej her deepest, darkest, and most personal fear: fish.

“We went to the reptile house, and I told him how I was terrified of reptiles and fish and sharks.”

Although the reptile house was certainly not Emily’s favorite part of the zoo, she was happy enough to go with Saej, who enjoyed the fascinating, though apparently scary, animals.

Michaela: At Starbucks, both Saej and Emily open up to us about their experience. Well, the parts we don’t already know from having watched them the whole time from afar. We begin broadly by asking how they felt about the whole thing over all.

“It was really fun, other than the weather,” Saej comments.

Yet the clouds didn’t seem to bother Emily. In fact, she thinks the weather enhanced the experience.

“I’ve been to the zoo in the sun but never in the rain, and it was interesting. I was just kind of bummed because not all the animals would come out.”

Both agree that the most interesting conversation they shared was about traveling. When we quiz them to see if they really learned about each other’s foreign experiences, they both pass.

Besides traveling, the two juniors also learned a lot about each other’s personalities.

Saej had also gathered a true sense of the lively and charismatic Emily Shepard, as his vivid description of her really hit the nail on the head.

“I learned that [she] likes to talk about a lot of things.”

Shep also said that when there was a lull in the conversation, they could always stop to look for their own personal stalkers.

“[We saw you guys] a lot of times, and every time, [Michaela] would hide and [Alex] would just wave.”

Well, I guess we’ll have to give up our FBI dreams. Way to go, Alex! 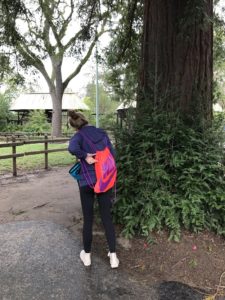 Saej and Shep’s own personal spy, Michaela, stalks from behind a tree with her inconspicuous umbrella and bag.

Alex: Michaela and I were a bit nervous at first with this idea. There were so many things that could go wrong on a blind date. Saej and Shep could have had unreported beef. They could have spent two hours in silence. It could have rained even harder than it did. Yet, despite some complications, everyone involved had fun. I’m happy about that. I hope that Mr. Anderson, who helped choose the couple, is pleased as well. I’d count this a success.

Michaela: Emily said that her experience blind dating definitely contrasts with her role as the humble moderator of the moderately successful ShepMingle.

“It’s definitely different being on the other side, but it was fun,” she says.

Saej, who doesn’t have a dating service, agrees that “blind dates should be with someone that you’re familiar with, but not too familiar with.”

The only suggestion he said he would make is that we at Talon “Check the weather forecast [next time].”

Maybe we will next time. Then again, will there be a next time?