You are here: Home \ Community \ Featured Posts \ Can’t Quite Put A Finger On It: What Happened To St. Joseph?
Community
0

Can’t Quite Put A Finger On It: What Happened To St. Joseph?

It was a cold and rainy Monday morning. Director of Facilities Mr. Steve Barsanti ’78 was strolling past the Saint Joseph Chapel. Then he saw it. He looked everywhere: in the bushes, in the grass, in the garbage cans, everywhere in its vicinity, but to no avail. He informed Co-Dean of Students Mr. Michael McCarthy ’80 whose […] 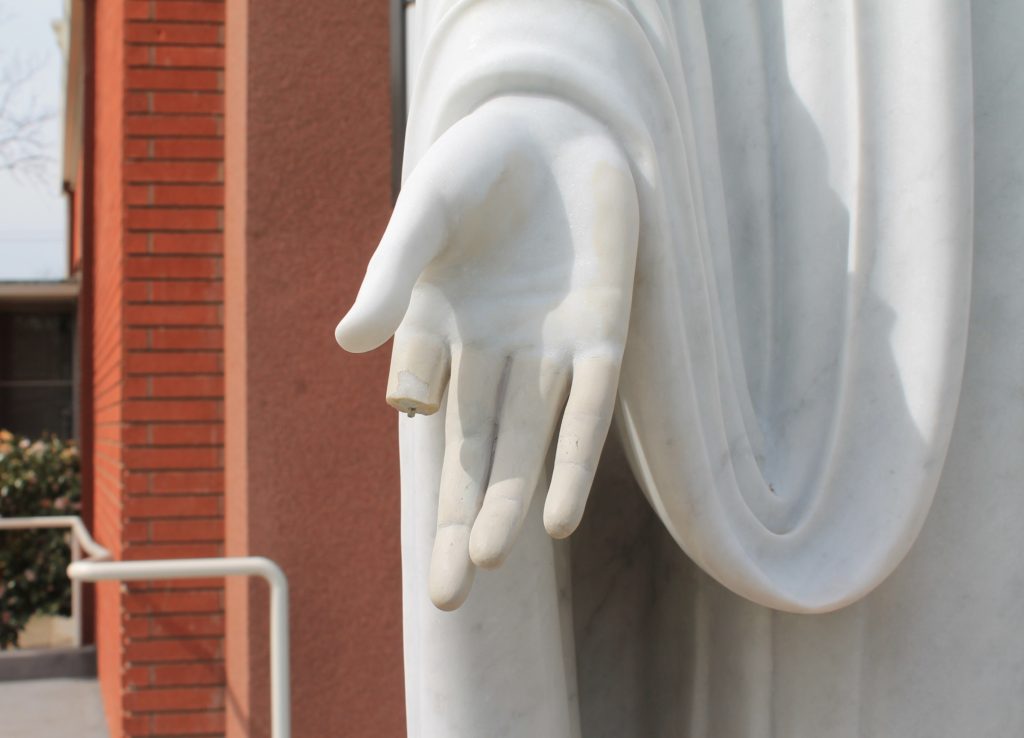 It was a cold and rainy Monday morning. Director of Facilities Mr. Steve Barsanti ’78 was strolling past the Saint Joseph Chapel. Then he saw it.

He looked everywhere: in the bushes, in the grass, in the garbage cans, everywhere in its vicinity, but to no avail. He informed Co-Dean of Students Mr. Michael McCarthy ’80 whose next step was to alert and inform the entire student body. Now, it has become a school wide crisis — Saint Joseph’s finger has disappeared without a trace.

The Talon went to the heart of the case to get the inside scoop, as well as to get the reactions of our students.

“The [Saint Joseph Statue] has been here since the opening of the school. He used to sit outside the admissions office, which at the time used to be the deans’ office,” said Mr. Barsanti. “But when we decided we were going to name the chapel after Saint Joseph, we decided to move him outside where he could be seen.”

Mr. McCarthy explained that during the original move of the statue, all of the fingers on the right hand fell off, and a statue artist had to come out to make repairs.

Now the big question — how did the finger fall off?

Both Mr. McCarthy and Mr. Barsanti think there was little chance of foul play, but Mr. Barsanti still has his suspicions.

“There was no evidence of the finger falling. You know, like if it hit the ground and left a mark — but there was nothing like that, so I can only guess what happened,” said the Facilities Director.

Mr. McCarthy is putting the blame on the weather during the week of the disappearance.

“With all the rain and wind this year, we think that the adhesive may have worn down from the original repair, causing the finger to fall.” he said. “Worst case scenario is [that] someone vandalized it and broke the finger off.”

Either way, by vandalism or weather issues, the missing finger has taken the school by storm, shocking the student body.

“I was just walking back from the counseling center, and then — I saw it.” she revealed dramatically. “It took me by surprise really. I stood there for a second perplexed and puzzled, but then I just busted up laughing and ran away to go tell everyone. It was honestly one of the best moments of my Christian Brothers career.”

“I first heard about the finger’s disappearance through the mass Schoology message Mr. McCarthy sent out. I went with my friends to go check it out and just laughed at it. It just seemed so out of place, and it was just amazing.”

Morgan shared that she just finds the whole situation to be comical. She does not believe that the statue was vandalized; Morgan credits bad weather mixed with bad luck.

Mari, however, explained that she went on a search for the finger, faithfully following the dean’s message.

“I literally went on a scavenger hunt with my friend for the finger. We looked all around the statue, in the bushes, wood chips, garbage, everywhere. There is nothing that I want more than to find the missing finger.”

She continued to express her passion for the missing finger as she explained she wants to make a finger in her ceramics class to replace it.

“I would love nothing more than to resolve this issue. If it means to make my own in my Ceramics class, then I will,” she said. “It would be a fun challenge and would be for a good cause.”

Many other students I spoke to agreed that they would create their own fingers as well, and Mr. McCarthy is even interested in creating a finger-making competition.

“If students had free time and wanted to make a competition of who could make the best finger, then I would be all for it,” he said. “I mean, we can even throw a little incentive — like a Jamba Juice card or something — for the winner.”

With possible smoothies at stake, why not get slabbing? Mr. McCarthy ended with a quick PSA for our students.

“In the future, if anyone notices anything falling off a statue or anything, please pick it up and give it to a nearby adult so we can try and get it fixed as soon as possible.”