Bucket Lists — things to do before you die. But what about a bucket list of things do to before you graduate? Some CB seniors have set out to achieve certain goals since their freshman year, whether it be making all the friends they can or trying new things they never thought they’d enjoy. […] 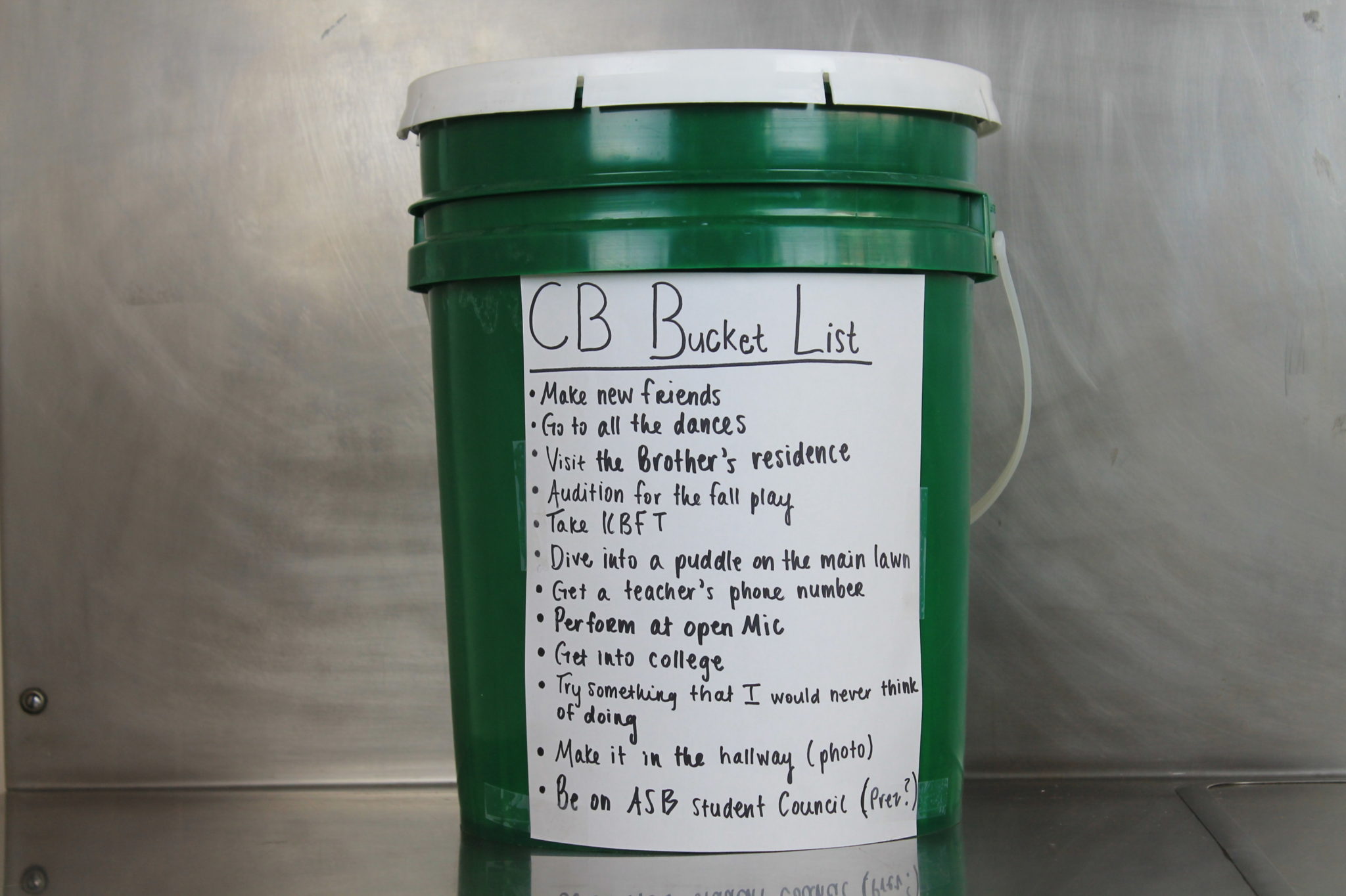 Bucket Lists — things to do before you die. But what about a bucket list of things do to before you graduate?

Some CB seniors have set out to achieve certain goals since their freshman year, whether it be making all the friends they can or trying new things they never thought they’d enjoy.

But what else is on the seniors’ bucket list? Diving into a puddle on the main lawn? Taking a trip to the abandoned Brothers’ residence? Who knows?

The Talon decided to find out what the Class of 2017 has dreamed of accomplishing during their four years at this fine establishment.

Humanitarian Dominic Hinton (’17) wants to do one big thing to leave his mark on campus.

“Maybe I would plant a tree to remind everyone that I was here,” he porders. “Or rescue one of the stray cats that wanders around the back of campus.”

Impatient senior Victoria Moyo (’17) cannot wait to accomplish one of the main tasks on her bucket list, a task that many of us might have checked off during sophomore year.

“I want to get my license so I can drive to CB for once!” she exclaims. “It doesn’t matter if there’s two weeks left, I want to drive myself to school.”

Catching up with your friends from high school can be fun, but being able to call your old teachers to schedule a charming lunch date is even better. Mariel Dozier (’17) makes sure she has the opportunity to treat her favorite former CB teachers to a scrumptious meal.

“I want to get a bunch of teachers’ phone numbers after I graduate so I can stay in contact with them because those relationships will last a long time,” she says.

Our seniors have been working hard this school year, making sure they can check off major goals on their 2016-2017 agenda.

Simone Soublet (’17) is very proud of the progress she has made with restoring the BSU.

“The Black Student Union wasn’t really active my freshman year, so Ayana [Watkins (’17)] and I reestablished it with Ms. [Lisa] Bronson,” she beams. “Now it’s pretty successful, and we’re handing it back down to all the lower classmen so they can take care of it when Ayana and I are off at college.”

Drumming sensation Sean Baker (’17) reflects on how getting into college was high on his list of achievements.

“Looking at my future in a very critical manner — in a sense of what I want to do and what I want to accomplish — I think for the most part, I have set up a good foundation of where I want to start going into college,” he states. “I think I have provided myself a good framework for that…so I’m excited.”

Innovative senior Patrick Barnes (’17) was not afraid to try something outside of the status quo.

“I always thought I was a KBFT kid,” Pat confesses. “But I realized that was not really for me, and I suck at it. Instead, taking a class like Creative Writing or the Talon was one of the best decisions I have made — best classes I’ve ever taken.”

Simone was super excited about completing one of her longtime goals.

“I have my first role in the musical! Normally I’ve always been in the ensemble, but this time I actually have some speaking parts!”

But in the wise words of Hannah Montana, “Nobody’s perfect.” Even the seniors have regrets about their high school experience.

“I regret not doing the KBFT thing,” says Mariel. “I’ve done a lot of random stuff just helping out KBFT, but I’ve never actually been in a class. I think film is interesting, and they do a lot of fun stuff that I wish I would have done.”

Dominic wishes that he had attempted to try more new things in the midst of his time at CB.

“I regret not taking more chances in high school — like going out for men’s volleyball. I think that would have been a lot of fun.”

There are only seven and a half weeks for the seniors until graduation, but that doesn’t mean that they still can’t add new tasks to their list. Victoria still wants to get her picture hung up in the hallway, and Dominic possibly wants to perform an original song at Senior Open Mic Night.

So start thinking of your own CB Bucket List, underclassmen — the possibilities are endless.