Getting To Know The Garzas

If you have ever seen two boys briskly walking through the junior hallway with their arms swinging and head down, I can bet you that those are the Garza twins. Yes, there are two of them, and no, you are not seeing double. Though we are blessed with many twins at CB, the Garzas are […] 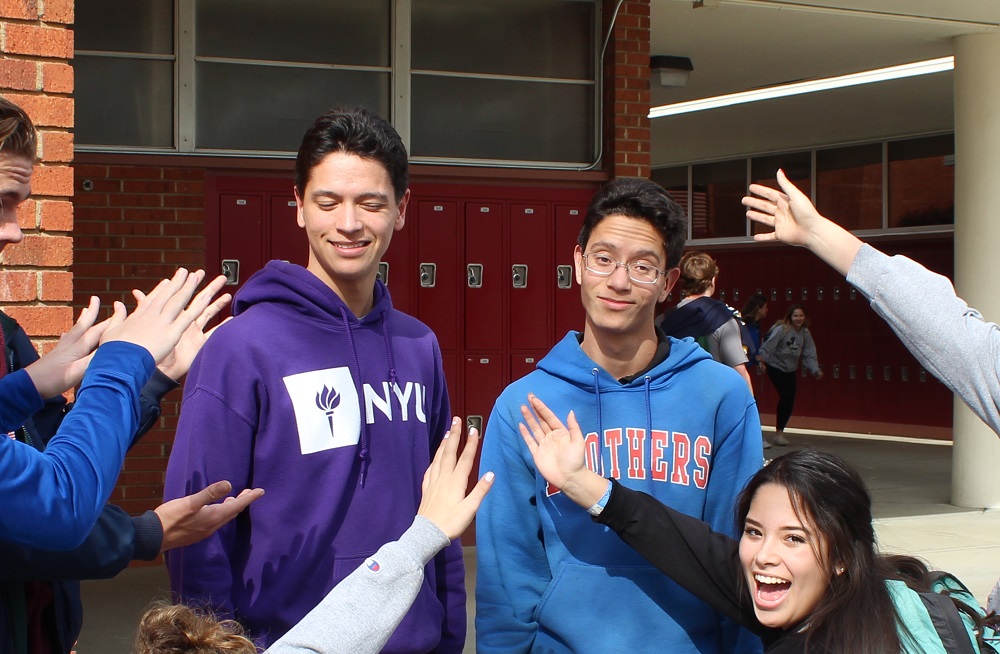 If you have ever seen two boys briskly walking through the junior hallway with their arms swinging and head down, I can bet you that those are the Garza twins. Yes, there are two of them, and no, you are not seeing double. Though we are blessed with many twins at CB, the Garzas are a treasure of the junior class.

A typical day in the life of David and Aaron Garza (’18) entails getting up, going to school, track, homework, and sleep. David and Aaron are in a variety of different classes, as David is in a few honors courses and Aaron is in CP.

However, there is one teacher, Ms. Tracy Chadbourne ,who was lucky enough to have these spunky twins in different sets. From her experience, both have completely opposite class presences.

“David participates more and wants to have the right answer while Aaron is much quieter but still works really hard,” the Spanish teacher says. “Aaron always makes me laugh and David is more serious.”

Ms. Chad has had Aaron for two years and David for one, so she is much closer with Aaron.

“He always will come into my room and ask me about my daughter, how my weekend was, and personal questions like that,” she said, reflecting her genuine love for the junior.

Even though she never had the chance to know David as well as she knows Aaron, she undoubtedly loves the Garza twins.

Though the twins don’t see each other very often during their classes, they spend most of their time together. When asked if they get along, David sarcastically countered my question,

“I mean do you get along with your siblings?” he said as he rolled his eyes.

Spending almost all your time with someone can be exhausting, and these twins can only have so much brotherly love. When asked about their pet peeves for each other, David wasted no time in throwing Aaron under the bus for his horrible phone skills.

“Whenever I call Aaron he never answers and he always ignores my texts whenever I need to get a hold of him!”, he said, again rolling his eyes.

Aaron lightly responds to this shade by using the typical excuse of “forgetting”. After getting exposed by his twin, Aaron was hesitant to think of what annoys him about David. After an agonizing minute of anticipating Aaron’s comeback, he finally exposed his brother.

“He whines a lot, like about everything,” Aaron claims, also eye rolling “You know it’s true”

If there’s one thing they have in common, it’s mercilessly roasting each other, but they do have a number of differences.

They came to a common consensus that David is more outgoing and open-minded and Aaron is narrow-minded and not as willing to try new things. Aaron thinks David, however, is more demanding and can be more controlling at times, but gotta Aaron loves him anyways.

Although they have different personalities, they share a common passion for writing. If you attended the December Open Mic, you would have seen Aaron present one of his poems.

“I’m really into writing songs and poems,” he said. “When I’m older I want to write screenplays or sell my songs to singers”

David’s passion is slightly different, as he’s into writing stories rather than poems and songs .

“I like to write a lot of stories and I want to publish them when I’m older,” David says.

There’s no doubt the Garza’s have a gift for writing, but I was determined to find another gift they possess.

When I questioned their twin telepathic ability they, both quickly chimed in, throwing their hands up,

“That’s not even a thing OMG we’ve never been able to do that!” Aaron screamed with a MAJOR eye roll.

Even though let down by their nonexistent twin telepathy skills, they still have my heart as one of my favorite pair of twins.

Besides school, track, and writing, they like to hang out with friends. One of their closest friends is Amanda Ledesma (’18), whom the twins have known since second grade Catechism. Amanda knows a thing or two about the Garza’s.

“They are sassy…very sassy!” she says.

Both Aaron and David make her laugh with their witty responses and she always has a great time with them. She asked David to Sadie’s this year and got the privilege of having Aaron tag along. Double the fun am I right!? 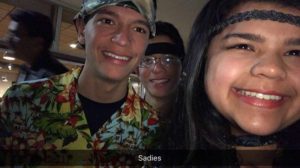 Amanda snapped a picture on the dance floor

Since Amanda had softball, she met the twins at the dance. The three of them killed it, throwin’ peace signs across the dance floor with their hippie attire.

The Garzas are great time on or off the dance floor and put a smile on everyone they meet. If you have never met them, you’re missing out on a whole lot of sass and laughs, but also the constant eye-rolls. So if you see them zooming through the hallways stop them and say hi!