You are here: Home \ Community \ Featured Posts \ Be You With BSU
Community
0

Be You With BSU

A club for all and a home for many, CB’s Black Student Union has become a place for students of all races and ethnicities to come together to celebrate and promote black history and culture. The Talon went to talk with some of the leadership of the club along with some members to see what […] 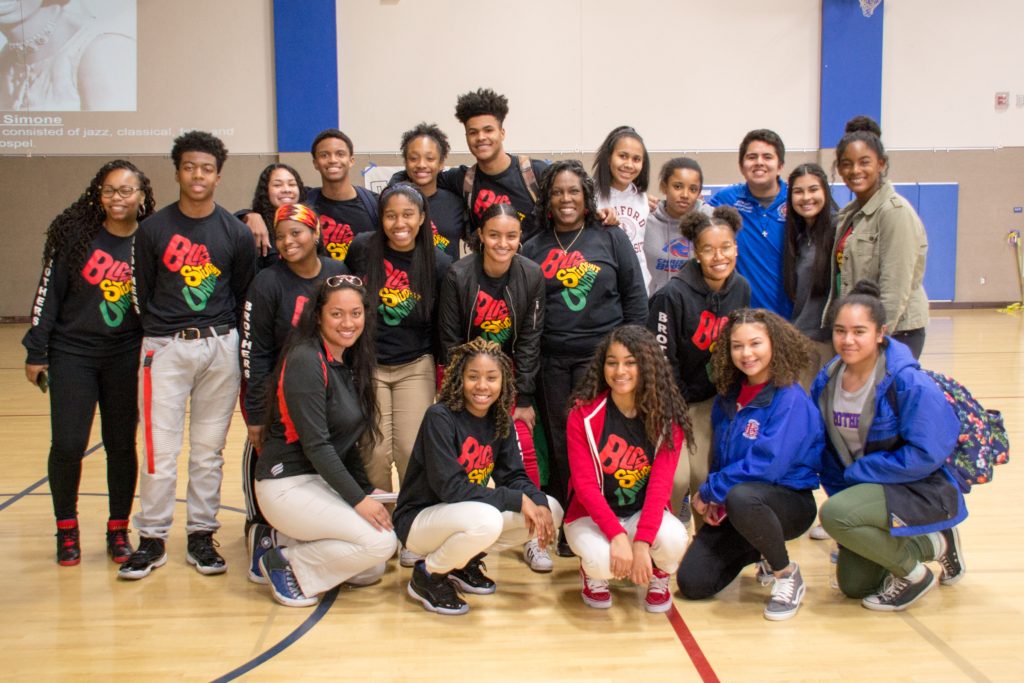 A club for all and a home for many, CB’s Black Student Union has become a place for students of all races and ethnicities to come together to celebrate and promote black history and culture. The Talon went to talk with some of the leadership of the club along with some members to see what all of BSU’s buzz was about.

We first spoke with Ms. Brittany Williams, CB’s Educational Technology Specialist and co-moderator of the BSU club, about why she saw the need for a BSU on campus.

“I think it’s important because this gives other cultures on campus a peek into what our culture is,” she stated. “If you don’t know or don’t understand, you can falsely judge sometimes, so we’re trying to show the CB community what our culture represents. We want to celebrate it with them.”

Ms. Lisa Bronson, a teacher in CB’s English department and co-moderator of the BSU club with Ms. Williams, feels that the club was needed so that students on campus could feel comfortable in their own skin.

Because African-American students are a minority on campus, Ms. Bronson felt that many students were not allowing themselves to be who they truly were because of the fear of being different.

“A lot of these students probably feel like they have to be two people,” she commented. “And I think before students joined the BSU, they had to be comfortable being…black.”

And for students like freshman Bria Shine (‘20), the BSU is exactly where they can feel comfortable being who they truly are.

“I like it because it’s the only place we can feel comfortable and say what we want to say without people being like, ‘Oh, that’s racist,’ or, ‘How can you do this, but when we do it we’re called racist?’” she explained. “Basically, it’s the only place where we won’t be judged.”

Bria went on to address a common misconception that students have about the BSU: the idea that it’s a discriminatory club.

“It’s weird because here at CB there are mostly white people, and many who I have talked to don’t think we should have BSU or they think that they should have a White Student Union because we have a black one,” she stated. “We are a very welcoming club, and we want people to know that you don’t have to be black to be in the BSU.”

“It’s not about being a separate group…it’s about being unified and being accepted for who we are. Not that we have to be white to be accepted, but we can all be together and celebrate our differences — and make CB even greater than it already is in the process.”

Living proof of the inclusivity that the BSU offers lies with sophomore Lizette Gonzalez (‘19), a Latina student who is proud to be a part of the BSU club.

When we first asked Lizette why she was interested in joining the BSU, she proudly stated, “to support my fellow minorities!”

“I just feel comfortable there,” she added. “I have friends in the BSU, and I like the teachers who run it…I just like the idea of celebrating the differences we have instead of letting them tear us apart.”

Ms. Williams believes that one of the reasons that having a BSU is so important is because our cultural differences as Americans have become less intense.

“Cultures have fused,” she says, “which is a good thing, but we’re just trying to reinforce who we are and what our culture is about…we can’t forget our history.”

“I think we can all celebrate this ‘fusing,’ but the reality is that our histories are very different and our experiences will be very different once we leave CB. I don’t want students to be lulled into the perception that it’s like this outside of the gates,” Ms. Bronson added. “Everybody should know about everybody; we shouldn’t discount our past because that’s what we use to guide our future.”

So how is the BSU spreading their culture this year? Well, you’ve probably already seen some of their work on KBFT or heard them during the morning prayers and shooting stars.

“One big thing this year we wanted to promote was African Americans in the sciences,” stated Ms. Williams. “We just want the people in and outside of the club to know what we’ve done as a people and how we have affected others. You may have noticed all of the profiles of African-American inventors and scientists on KBFT — those are bits of information that we’ve gathered to show others that our people were huge in creating many of the things we use today.”

The BSU also collaborates with other diversity clubs on campus to promote inclusivity.

“Diversity day is in April,” states Ms. Williams. “It’ll be a day when all of the diversity clubs on campus — BSU, La Raza, the Diversity Alliance — will get together and celebrate our different cultures together. It should be a really great day and hopefully a fun learning experience for the CB community.”

It’s clubs like the BSU that explain why people feel a sense of community and family when they step onto CB’s campus. Not only does the club help to prepare CB students for the diverse world around them, but the BSU is also one of the prime examples on campus of what an inclusive community really consists of. They truly help make CB the place to be.