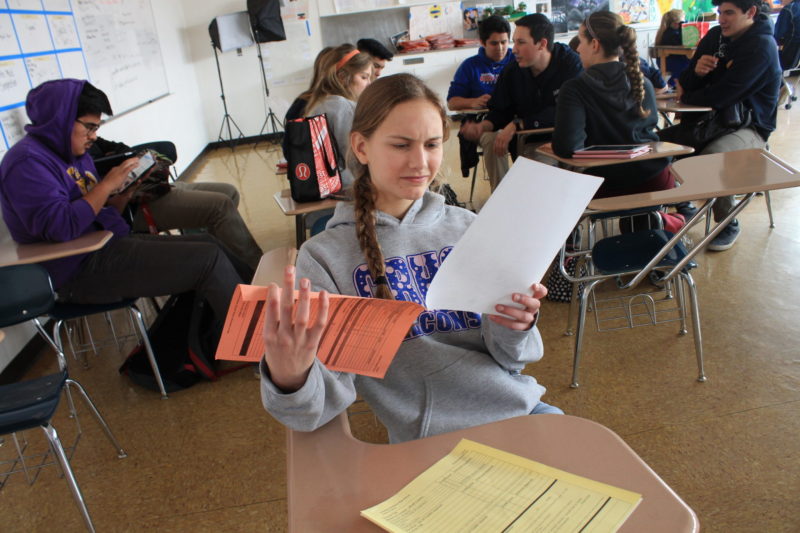 The number one justification I hear from other students for doing anything is because it will look good on their college application. It seems to me that many people don’t do the things they truly want to do and enjoy themselves in high school — they just want to look good to college admissions officers. Which is understandable. I’m guilty of this too. Why do you think I’m writing this article right now? [Ed note: /thinking, skeptical emoji]

Challenging yourself is also important, especially in school. And I know that different people find different things challenging. Some people struggle through college prep classes whilst others breeze through five AP classes. There isn’t just two groups — people find challenges in between these two extremes as well.

In my opinion, students most in danger of overworking themselves are the ones who have stayed in the accelerated tracks since freshman year. Of course, it’s not isolated in this group, but as a member of the accelerated track, I can say that the culture of our group can sometimes be cancerous.

To generalize, we’re kind of addicted to the competition; everyone knows everyone else’s GPAs, ACT/SAT scores, and in most cases even individual test scores. This information is disseminated throughout the class and we subconsciously and consciously compare ourselves. In doing this, we’ve signed ourselves up for one-dimensional competition over who has the most AP classes, the highest GPA, is in the most clubs, does the most community service, gets the most awards, etc.

This need to always one-up others creates a toxic environment where students have to choose between something that they want and something that colleges might want more. I don’t think students should join a club or activity unless it’s something they truly care about it. Investing your time and energy in an activity should mean something. On Club Day, when you sign up for clubs, are you joining because the club represents something you are interested in, are do you just want something on your college resume?

Kat Stenger (‘18) is co-president for the Environmental Club. The club boasts around 100 members which makes the group one of CB’s largest. Now 100 people is a lot people, and the Environmental Club confines its meetings to Ms. Kelly Safford’s math classroom. Something doesn’t add up; how do that many people fit in such a small space?

“About 15 people regularly show up every [meeting]” reports Kat.

You can draw your own conclusions about this, but the meeting I attended at the end of January only had six students show up. Despite overwhelming support during Club Day, apparently not that many students have the time or interest to show up to the short meetings during break.

Yes, college like good grades, tough classes, and clubs. But that’s not the only criteria. Colleges want people who have interests and passions that have demonstrated these curiosities through their extracurriculars. You should enjoy the clubs and classes that you join. Do you think that I would stay in the Talon if it wasn’t fun? [Ed note: /thinking, skeptical emoji]

When you look back, high school will not be about the classes you take or the activities you joined. It will be about the people and the connections you made with them. Perhaps the communities you joined — either clubs or sports teams — will be important to you. But if they are, it will be because you truly cared about whatever your club or team did. You probably won’t look back on your additional AP course or club favorably — because is one additional note on your college app really going to sway an admissions officer?

Pre-registration is coming up at the end of the month. You should probably try not to overwhelm yourself. Taking one class that you know you won’t enjoy likely won’t determine whether or not you’re accepted to the school of your dreams. But if you replace it with something you want to learn about or something you want to do, it could determine how much you enjoy your dwindling time in high school.