You are here: Home \ Community \ Featured Posts \ It’s That (Valen)Time Of The Year
Community
0

It’s That (Valen)Time Of The Year

You wake up on a chilly February morning only to realize it’s Valentine’s Day…great. Another year has passed and you’re still single. But wait it gets better…you get to go to school and watch all the couples take cute pictures in the photo booth and exchange gifts! Lucky for you, that’s not the case […] 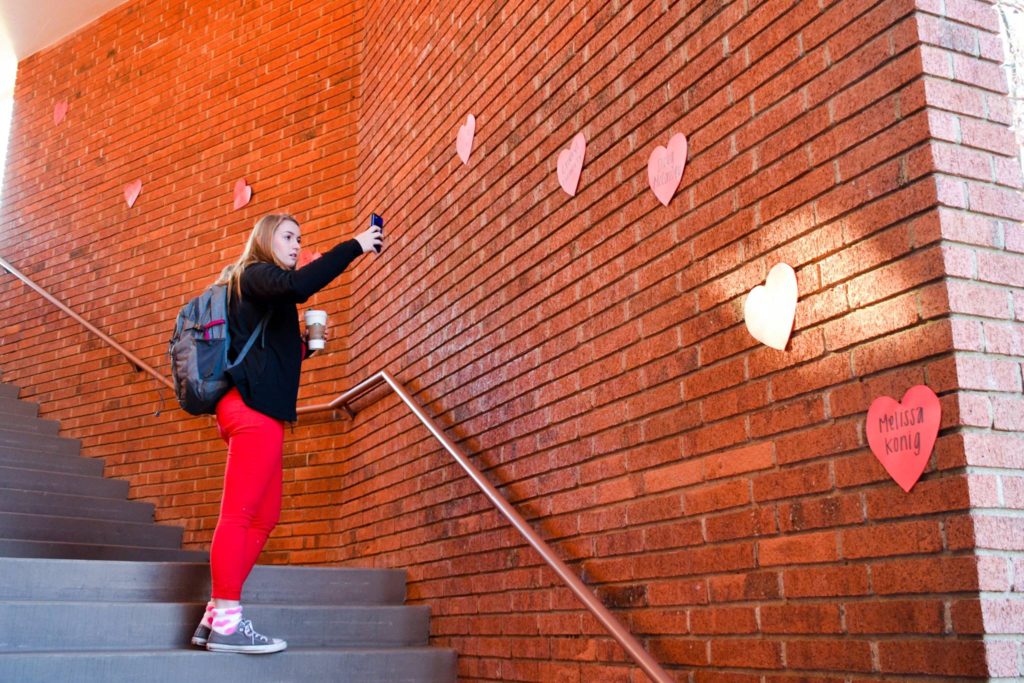 You wake up on a chilly February morning only to realize it’s Valentine’s Day…great. Another year has passed and you’re still single. But wait it gets better…you get to go to school and watch all the couples take cute pictures in the photo booth and exchange gifts!

Lucky for you, that’s not the case a here at Christian Brothers as all the students, single or taken, get to participate in finding their friends hearts and wearing them all day.

But how do those hearts get put up all around the school? It turns out it wasn’t Cupid, but the next best thing — our very own leadership and student council.

Leadership teacher and student council moderator Mrs. Rose Ann Holmes was exposed to Valentines Day tradition when she first started working at CB. Each person in her leadership class is the head of a committee, and the Valentine’s Day Committee takes on the giant task of cutting and writing hearts for the whole school.

If you have visited the LSLO this semester, you would have seen the heaps of red paper, scissors, tape, sharpies, and students all working to finish the numerous hearts. Not only do all the 1150 students get their own heart, but Mrs. Holmes informed the Talon that they make some for the coaches and janitors. Making 1150 student hearts seems like a huge task in itself, but now add the 120 staff members, the 50 extra hearts KBFT requested, and extra hearts in case of mistakes.

To complete roughly 1340 hearts, leadership goes through 1500 pieces of red paper. Each heart is hand traced and cut in groups of three. Once they are cut, they need to be labeled with the correct spelling of each person’s name. Then, all the hearts need to be checked to make sure no one is left behind.

This all seems like a ton of work, but Mrs. Holmes’ go-to girl for the hearts this year has been Maile Shelley (’17), who is the head of the Valentine’s Day Committee. Maile is the only student technically on the committee as “everyone else just helps when they have time.” She has been working on this task since the beginning of the semester and relies on the generosity of her friends for help. 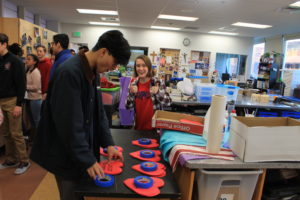 She describes her role as being in charge of, “picking the people to help cut, trace, and write out all the names and help hang them up with student council.” With this huge job to finish Maile constantly expresses her gratitude for her the help of her friends.

Three rings of paper and over 1000 hearts later, student council arrives to school at 7 AM on Valentine’s Day to tape the hearts all over school. Lockers, bathrooms, ceilings, cafeteria — you name and there’s bound to be a heart or two taped there.

One of the reasons Emily Shepard (’18) loves the hearts is because “it includes everyone whether you’re dating someone or wearing your friends heart.” As the hearts allow all to participate, this tradition embodies the Lasallian Core Principle of an inclusive community.

Emily anticipates Valentine’s Day because she loves to collect and trade hearts. With two years of experience, Emily has her own system of collecting as many hearts as possible.

“I like to get to school early and find all my friends hearts and then trade them throughout the day,” the junior says.

She even has kept hearts from the previous years and is hopeful to collect, trade, and keep more hearts this year.

JR Aguirre (’18) shares the same love for the hearts as Emily; however he has a different perspective of the hearts as he is a member of Junior Council.

“Setting up the hearts allows me to see how excited everyone running around the school, trying to collect as many as possible,” he said.

Getting to school at 7 AM to set up has some perks as student council get to have first dibs on selecting the hearts they want while watching the madness unwind.

The hearts are a huge hit every year and students always ask Mrs. Holmes about the possibility of using the same concept of hearts around school for Christmas, but using snowflakes instead of hearts. Mrs. Holmes doesn’t see this an option because, “with all the work that goes into it, doing this more than once a year would be way too difficult.”

Also she feels that since the hearts are what makes Valentine’s Day such a special and awaited holiday at CB that repeating the idea more than once a year would take away from its uniqueness.

The popular saying,”Work hard, play hard,” completely applies to CB Valentine’s Spirit Day. As many students would refer to it as the best spirit day, it most definitely comes with a massive responsibility to all those involved in the preparations.

Thanks to the hard work of Maile and Mrs. Holmes, February 14th remains one of the best days of the year here at CB.