February 2nd, 2017: The day every senior’s heart dropped. The class of 2017 received an ultimatum: if the seniors are issued 25 dress codes before February 28th, then senior privileges will be stripped for the first time in Christian Brothers High School history. The Talon went to Mr. Tom English and Ms. Marian Shackel, […] 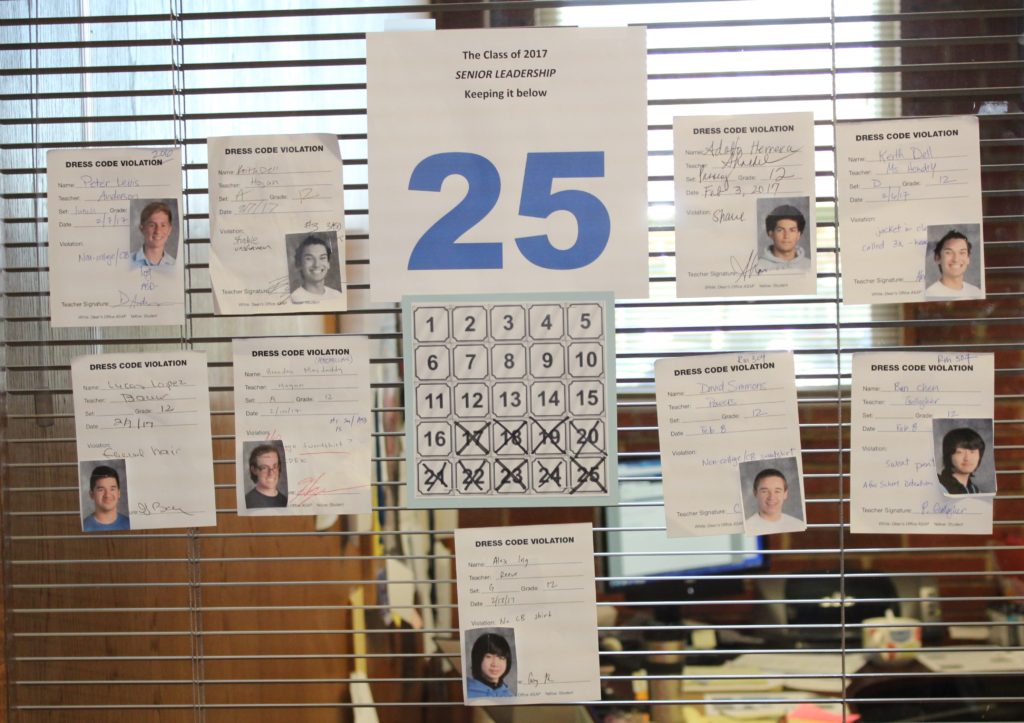 February 2nd, 2017: The day every senior’s heart dropped. The class of 2017 received an ultimatum: if the seniors are issued 25 dress codes before February 28th, then senior privileges will be stripped for the first time in Christian Brothers High School history. The Talon went to Mr. Tom English and Ms. Marian Shackel, the senior class moderators, to get the inside scoop on the latest case of the Seniors v. School.

Mr. English explained that the senior class is out of dress code on a daily basis, ranging from young ladies wearing yoga pants or leggings to young men walking around unshaven.

“[The dress code] is one of the things that is most visible to teachers in terms of whether if the class is involved in really working towards earning these things called ‘privileges,'” says the senior moderator. “[Violations of the dress code] is in [staff members] faces on a daily basis, and the situation is that the class is supposed to be role models.”

When asked about the dress code, one student responded, “Well, what does it matter?”

“It matters because [the senior class is] the role model now more so than ever,” Mr. English says. “In the second semester, [the underclassmen] watch to learn from [the seniors]. The freshman are frightened. They don’t know what to look at, but [during] the second semester, the freshmen, and to a certain extent the sophomores, are looking at [the seniors’] behavior…and they are going to start emulating it in the fourth quarter. Many of them are trying to do it now.”

Ms. Shackel added her insight about the seniors being role models.

When seniors show up out of dress code, “then juniors feel like, ‘Oh, we can do that.’ Sophomores feel that they can too — freshmen are still pretty scared because they’re freshmen — but that’s pretty much it. It rolls downhill. You impact all other classes. Your behavior, good or bad, is looked at.”

Mr. English revealed that the seniors are held to a higher standard. They need to be role models for the school and exemplify what it means to be a Christian Brothers student — and in the case of dress code, the seniors are the most visibly defiant.

“If you combined all our fingers and toes together, then that is probably the number of dress codes our seniors get on a daily basis,” he said.

Troi Sneed (’17) has a different opinion.

“Yes, we should [be good role models], but you can’t always look up to some people. The underclassmen shouldn’t depend on us to look at dress code. They know the rules too. Don’t lean on us,” said the fiery senior. “Don’t do something just because we’re doing something. If we jump off a bridge, are they going to jump off too just because we’re seniors?”

Although David Rosas (’17) sees Troi’s point, he sides with the Senior Moderators.

“As seniors, underclassmen look up to us. We set the tone,” he commented.

However, Garrett Cappello (’17) believes that the seniors are not solely responsible for his class’ flaunting of the dress code.

“What was the model we were given?” he asked. “We are the sum of our experiences.”

Whatever the circumstances, the fact is that the senior class is now faced with this stipulation. Mr. English explained that he does not want to do this to the seniors and did not want to have to talk to the class the way he did.

During the interview, he took a deep breath and went on to describe the frustration that the teachers have with the seniors.

“No one is doing anything anymore because who wants to keep filling out forms? People are frustrated, teachers are frustrated, some have given up, and [teachers] are saying, ‘If [the seniors] don’t take [dress code] seriously, then do they really deserve privileges?'”

“I chose 25 dress codes, and I feel if I chose any higher, then it would’ve been obscure. I could have said 10. I felt like saying one — which in that case, [the senior class] blew it by break the very first day.”

It’s frustrating for CB teachers and staff when seniors are constantly coming to school out of dress code yet also constantly asking, “When do we get our privileges?”

Mr. English established that privileges are just that — privileges.

“You earn privileges,” he stated. “If [the senior class] haven’t earned them, then there is nothing to take.”

The Class of 2017 has definitely stepped up to Mr. English’s challenge. Many CB seniors are proving that they deserve those privileges, but some still are getting the hang of it. However, the seniors have done their part to make sure everyone in the class stays in dress code. A “Wall of Shame” has been set up by the cafeteria, and the deans have their own as well. 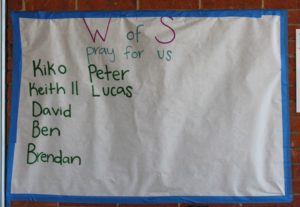 The “Wall of Shame” hung right next to the cafeteria doors.

Troi sees the seniors’ Wall of Shame as “very immature, but funny.” She doesn’t think that it’s actually useful, though.

“I think [the Wall of Shame] is an absolutely wonderful thing to have. It is kind of a positive peer pressure that can change some people into getting into dress code because they don’t want to be exposed in front of the entire school.”

Besides the Wall of Shame, seniors are coming to school with bags of CB shirts and sweaters and CB dress code pants to help others out of dress code.

Mr. English and Ms. Shackel say that the best thing the seniors can do to help is to communicate.

“Talk to each other as brothers and sisters. Be the big sibling to your peer. That’s part of the Lasallian tradition — being a big brother or a big sister. Think of your fellow classmates and encourage each other.”

The seniors have an enormous task ahead of them. As of Wednesday, February 15, 2017, the seniors have received ten dress code violations. There are just two more weeks until their deadline, and Mr. English, Ms. Shackel, Troi, Garrett, and David all have high hopes and expectations for the seniors class.

Mr. English finished with a message of encouragement and hope for the seniors.

“Privileges are all or none…and I’d like to think you guys will earn them. I would like to see you get them — but the ball is in your court.”