You are here: Home \ Community \ Featured Posts \ Six And A Half Miles In Someone Else’s Shoes
Community
0

Six And A Half Miles In Someone Else’s Shoes

I walked 6.5 miles to and from school and lived…barely. CB students Sharif Morton (’17) and Erik Ma (’17) took me on their not-so-unusual journey to school. Sharif and Erik are two good friends who both live in Pocket. However, this isn’t the only thing they have in common. Neither of the them had a […] 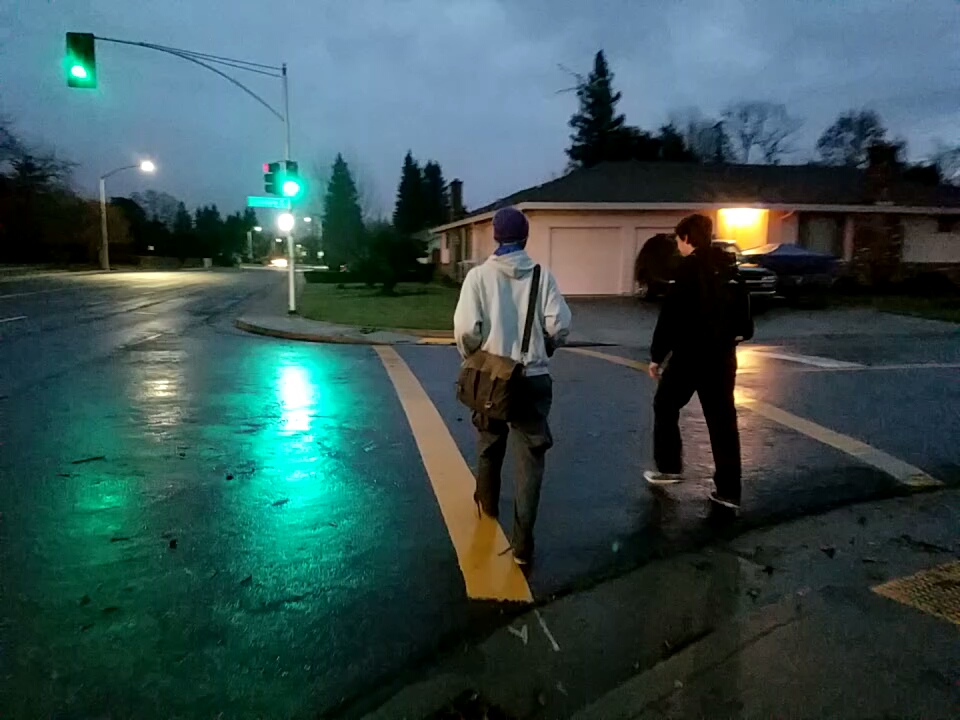 I walked 6.5 miles to and from school and lived…barely. CB students Sharif Morton (’17) and Erik Ma (’17) took me on their not-so-unusual journey to school.

Sharif and Erik are two good friends who both live in Pocket. However, this isn’t the only thing they have in common. Neither of the them had a way of transportation to and from school most days their sophomore and junior years. The two started walking to school separately, but when they found out that they both had the same routine, they started walking together.

I live in Pocket too, and it takes me roughly 15 minutes to get to school every day. I consider myself lucky to have such a short ride to school since I rarely hit traffic on my route. I thought that the walk wouldn’t be incredibly long. However, when I asked Sharif and Erik how long it would take them, their nonchalant response was about two hours and fifteen minutes. I sat stunned and thought they were absolutely crazy.

“I would wake up at 5:00 AM and try to leave by 5:45 AM,” Erik said exhaustingly, “just so I could give myself a good amount of time in case it was raining or something.”

This was the most unappealing part to me. I know plenty of people who run 5ks or 10ks or half marathons, and it’s fun for them. But the fact that you know that you’re walking for two hours just to get to school is tedious to think about.

Sharif and Erik found that they weren’t as exhausted as some would think during the school day.

“It’s not that bad to be honest,” Erik says. “I’m pretty awake after [walking] since I’ve been up for so long. It just became a habit really.”

Erik would usually get rides from seniors, but sometimes they couldn’t give him rides when he was a freshman. Then, when he was a sophomore, his rides had graduated.

Sharif never really had a ride from anyone. His mom had work in the mornings, so she couldn’t drive him. He would take the bus, longboard, or bike to wherever he had to go.

Sharif was used to taking an alternate mode of transportation and Erik was used to walking. The walks were a nice way for them to talk to one another and hangout. So it became a habit for the two friends.

Our route to school

Their route was pretty simple. They would meet at Erik’s house, near the corner of Riverside and Florin. They would go up Riverside until they reached Zacharias Park. From there, they would go up the levee and take it all the way to Fruitridge. Then, they’d take their biggest stretch down Fruitridge all the way to Martin Luther King. Then, of course, they take MLK to school for a grand total of about 6.5 miles.

After hearing all the facts, I felt that it was only necessary for me to give the walk a try. Sharif, Erik, and I planned to walk on a Monday morning, which in hindsight was an awful idea — who likes Mondays anyways?

I woke up at 5 o’clock in the morning — yes, it is as awful as it sounds. I had a small breakfast, not realizing that I wouldn’t be eating until lunch later that day. I left my house around 5:35 and drove to meet Erik at his house — I was not going to walk anymore than I had to.

At 5:45, I was greeted by a very vibrant Erik Ma, who happily offered to let me in on a dark, damp, 38-degree morning. We waited about 15 minutes for Sharif to show up and ended up leaving at 6 (15 minutes later than their usual time).

I decided to take several logs on the walk to school; here is my first one:

6:00 AM: Feeling very tired. It is pitch black outside. I am very cold. Sharif is a little too awake for me and is playing “Isn’t She Lovely” by Stevie Wonder. I don’t know why.

It took us about 15 minutes to get past Florin and Riverside. The walk was going pretty well so far. I worried that we might just have awkward silence the whole time, but we ended up having steady conversations. At this point I was clearly hungry, because my next log reads:

We walked up Riverside until we reached Zacharias park. We walked through the vacant park and went on the levee.

6:30 AM: We are on the levee now. It is very dark and low key scary. Some guy just walked past. Sharif said hello but the guy just looked at him and didn’t respond. Currently freezing my butt off.

Our time on the levee was somewhat short. We got off at the beginning of Fruitridge. We had been walking for about 50 minutes now and I ran into an unforeseen problem.

6:50 AM: Just got off the levee and onto Fruitridge. I have to pee sooooooo badly.

At the same time I ran into this problem, I decided to ask Sharif and Erik what they do if they have to pee. The two looked at each other with confused looks on their faces.

“We have never really had to,” said Erik, somewhat amazed at his own statement.

“Yeah, we usually use the restroom before we leave,” Sharif said, stating the obvious.

I said that I didn’t actually have to go, but I was just wondering. So I fought through it and began our very long stretch down Fruitridge. At around 7 AM, we reached the halfway point. We were one hour in, and my pedometer notified me that I had just reached 6,000 steps. I was pretty amazed when I saw this because I average around 6,000 steps on a normal weekday, but today I had been awake for two hours and already passed my average.

Ten minutes later, we crossed the street by Belle Cooledge Library, and I realized that it was light outside. The sun was not up yet, but it was our first experience of daylight. The first hour and 10 minutes really was not that bad, but I began to hit the wall at this point. I was exhausted, hungry, and really had to pee. Sharif and Erik were moving along with ease and continued to keep good conversation between the three of us.

By 7:30, we had passed Freeport and the sun was up. On my normal drive to school, I would also be turning off of Freeport at around 7:30. This got me thinking because I usually see several cars, if not at least one, with a Christian Brothers sticker or license plate on the back of it.

“People don’t stop and pick us up very often,” says Erik. “We see people from our school all the time, but they never really pull over.”

Sharif recalls being picked up a few times by some of his closer friends, but not very often. I was kind of surprised by this, as CB students are very friendly. But I gave them the benefit of the doubt because I realize it might be difficult to recognize three kids by the back of their heads.

We reached the corner of Franklin and Fruitridge and decided that it would be easier to cross at this time. Sharif asked me for the time and I said that it was 7:45. The two looked at each other and came to an agreement.

I figured this was a problem that they had to face all the time. When I asked them, they both said that this was going to be their first time. Erik could vaguely remember a time where he was late to his A Set, but recalls he “wasn’t even marked tardy,” with a small chuckle.

It took us about 10 minutes to finish crossing Franklin and Fruitridge, and we even got a few waves from other CB students driving past. I was exhausted now and looked to see a mountain ahead of me — the Highway 99 overpass. The hike was the straw that broke the camel’s back, or in my case, the 15,000th step that made the tired student want to just fall down and go to sleep. However, I found my Jesse Owens stamina and made it over the overpass and crossed the street at Fruitridge and MLK.

It was 8 o’clock. We were officially tardy.

This last little stretch of our journey led to some thinking. How lucky am I to have a car that can drive me to school every day? I felt kind of awful that I complain about being in traffic for an extra five minutes while some people still have another hour and a half of walking ahead of them. I can’t even imagine someone doing this every single day. 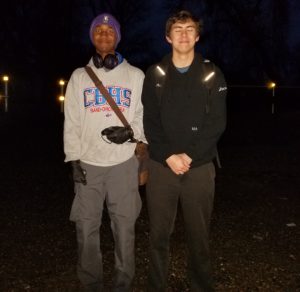 Sharif and Eric pose at the crack of dawn.

“You really get a new appreciation for what you have,” said Sharif. “The car you drive, the neighborhood you live in, the warm clothes you have — they are all gifts that we take for granted.”

“We did this all the time,” said a sympathetic Erik. “To think that people did this too but even farther or in a more dangerous neighborhood really makes us thankful for what we have.”

We made it to the school parking lot 10 minutes later. I swear it was like crossing a finish line. Way more rewarding than I thought it would be. My final log states:

It was a total of two hours and fifteen minutes exactly. I walked into the KBFT studio, dropped my backpack on the ground, and laid my head down on the table with my eyes closed. After my exhausting journey with Sharif and Erik, I was ready to sit down, be lazy, and rest.

“Marcus! You need to make graphics for the live streams this week!” yelled Mr. Hogan.

I had just walked over six miles, but my day was just beginning.