One Acts: A beloved CB theatre tradition culminating in one intense weekend of performances early second semester. But for all the non-theatre folk, what does that mean? Well, the simple answer is that One Acts is a series of three to four small plays, each lasting around 20 minutes. So, it’s like going to see the spring musical […] 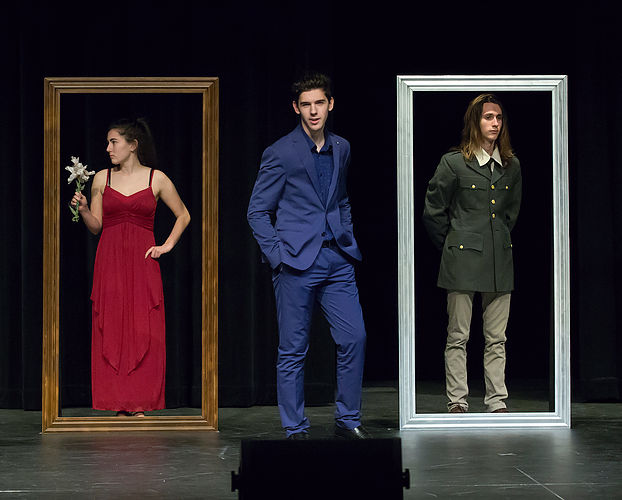 But for all the non-theatre folk, what does that mean?

Well, the simple answer is that One Acts is a series of three to four small plays, each lasting around 20 minutes. So, it’s like going to see the spring musical or fall play — except with One Acts, you get three stories for the price of one.

But, unlike the other lovely theatre performances, the students’ hard work and dedication begins way before auditions. CB students actually write and direct these plays; each one is an original work created by a student, to be performed by other students, and to be seen by you!

Three plays were selected this year for the three-day festival. The first — a riveting tale featuring a ghost, a dog, and a whole lot of jazz — is called “Fish and the Dead Man,” written by Carley Jo Huntington (’17).

She decided to contribute her beautifully written work and creative imagination to the event because after her first round of writing and performing a short play in Ms. Chrys Cassetta’s creative writing class, she loved it so much that she wanted to produce a play for real.

“I’ve never done any theatre before,” the senior commented. “I really wanted a chance to check it out before I left CB because I have so many talented theatre friends!”

The second is simply called “The Theatre.” Written by Emily Davis (’18), the play is set in Elizabethan England and tells the tale of a theatre owner, Tom, who is on a journey to put on the perfect production to save his beloved business from being shut down. That is, until his entire theatre company quits and his good friend has to help him come up with a savvy solution.

Ever since she was little, Emily has harbored a passion for important parts of creating a visual performance, such as plot lines and costume design.

“I’ve always had stories floating around in my head,” she explains. “My friends and I used to act out our own little plays, and we always dressed up. I constantly made my own costumes — whether it be out of my mom’s clothes, sheets, or my own clothing that I would match together!”

“Writing has also always been a passion of mine,” she adds enthusiastically. “After performing in One Acts last year and taking the theatre arts class, writing plays became a really fun outlet for me.”

The final show is “Through the Window,” written by Tori Davis (’17). It’s about a lonely shut-in named Martin who makes a very unlikely friend.

“I won’t give it all away here, but I will say that one of the characters really ‘stole’ my heart,” Tori hinted. “You’ll understand once you see it.”

Like Emily, Tori began her creative journey as a child.

“I’ve always loved writing stories — ever since I was little, I was a story teller,” she exclaimed. “I used to write full length ‘books,’ if they can be called that. But as I’ve gotten older, I’ve found that the thing I love writing is dialogue, and so I’ve really tried to harness it.”

Her desire to be part of the One Acts performance this year was influenced by her positive experience the previous year.

“Last year was the first year I submitted a play to One Acts, and I loved the whole experience. The show became my baby. I wanted that feeling again — that feeling of watching something I made come to life and grow into something incredible right before my eyes.”

Tori believes that this event not only provides an outlet for amazing talent to be showcased, but also an opportunity for those who participate to feel like a part of something special.

“I think that people forget just how much talent there is at CB, and One Acts is the perfect opportunity to remind people that, ‘Hey! We’re here!’” she comments. “I mean, I was sixteen when I directed my first play, now seventeen and directing another play. Not a lot of people can say that.”

Emily adds that many of the people who are in One Acts wouldn’t naturally gravitate towards the larger productions, which means that One Acts is the perfect opportunity for students to dip a toe into the theatre world without committing to a full-length production.

This wonderful show not only gives a glorious opportunity to young actors, but also provides an outlet for writers, designers, and directors.

“It’s inspiring. These are plays written, directed, cast, and performed by people you pass every day in the hallways,” Tori states. “The plays are relatable on a whole new level because they’ve been written by someone you might sit next to every single day. They are funny, deep, exciting, poetic, and [showcase] some of CB’s finest young actors. It’s so inexpensive to get a ticket and overall a really fun evening.”

So if you have some time, a few dollars, and are looking to support your fellow Falcons, come on over to the George Cunningham ’40 Performing Arts Center and experience all that your friends have to offer on February 17th at 7:00 pm, February 18th at 7:00 pm, and February 19th at 2:00 pm.