You are here: Home \ Arts \ Falcon Features \ Featured Posts \ The Girl Behind The Flower
Arts
0

The Girl Behind The Flower

If you’ve ever set foot in the CB choir room, odds are that you’ve seen the one and only Jennifer Rustad (’17) at the piano. Anyone who listens to her play can hear the obvious talent pouring out; however, many students just know her as that blond girl who always has a flower in her hair. The […] 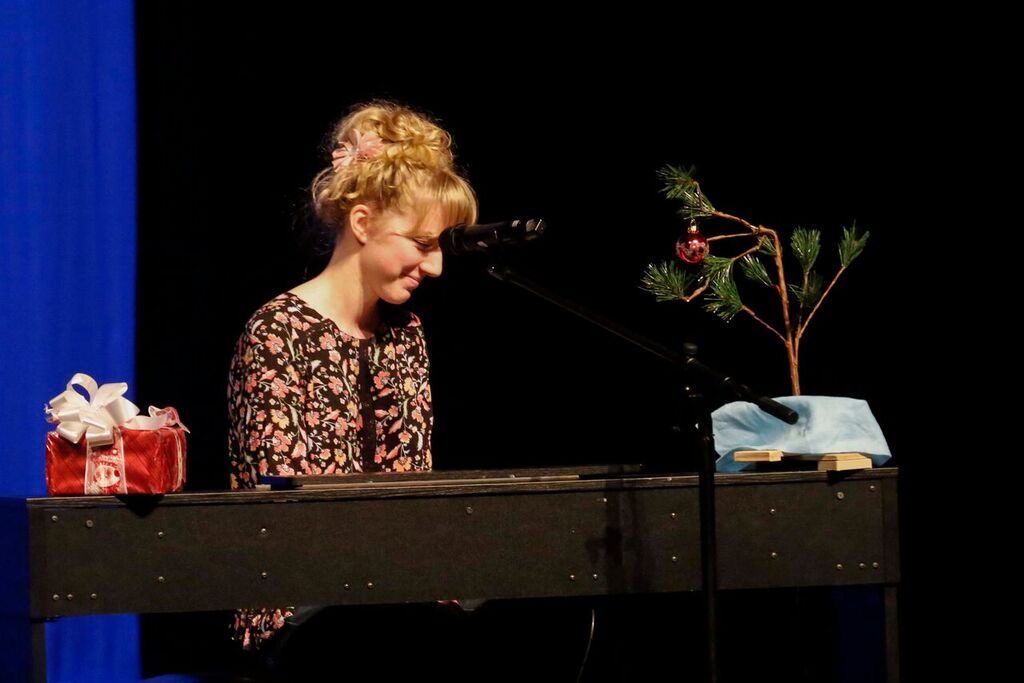 If you’ve ever set foot in the CB choir room, odds are that you’ve seen the one and only Jennifer Rustad (’17) at the piano. Anyone who listens to her play can hear the obvious talent pouring out; however, many students just know her as that blond girl who always has a flower in her hair. The Talon dug a little deeper to shed some light on this amazing musician.

“I met her sophomore year, the first year I took Honors Chorale,” explained Isabel Nguyen (’18), a junior in multiple choirs with Jennifer. “She was really nice, like super nice…she was so talented that I was blown away, and to this day, she’s my role model.”

“She’s so unassuming,” Dr. Anthony Lien, CB’s choir director, comments. “She doesn’t make a lot of noise…but she’ll frequently find a time to sit down at the piano, and…she just begins to play something, and it’s almost never the same something that she plays.”

In addition to Honors Chorale, the highest choir in the program, Jennifer also takes Vocal Jazz during zero period. Ms. Gaw Vang-Williams, the Jazz teacher who goes by “Gaw” (rhymes with “now”), shared some of her first impressions.

“She was the mousiest kid I’ve ever met. Like, very very quiet,” she said. “But when she sings, when she sings her highest soprano stuff, that’s when she really just kind of lets go,”

Jennifer agreed about her volume, laughing as she reflected on her early years at CB.

“I know I’ve grown a lot since freshman year because I was super quiet. Even when I first started Jazz, I was super quiet and everyone used to tease me because I sang like a little mouse, and now I’m super loud and they’re like, ‘Shut up, Jen!'” 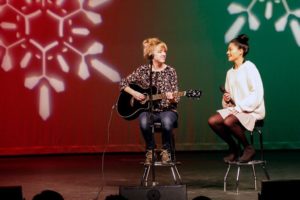 Jen slays at the Christmas Open Mic alongside Andrea Gonzalez (’17)

Over the years, Jennifer has grown a great deal both as a musician and as a person. Although still quiet and respectful, she’s become much more confident and outgoing.

“She’s singing out more; she’s taking more lead, so her personality is coming out,” Gaw shares. “You can see her emotions in her singing.”

As a member of the four-year art program, Jennifer has been in choir since freshman year. Taking one extracurricular for so long gives students an opportunity to dive deeper into a subject, so the program is a dream come true for artistically inclined students like Jennifer. She has appreciated the chance to work on more complex pieces in her three years of Honors Chorale.

“I’ve really enjoyed it,” the senior said. “Mr. Lien gives us a lot of cooler songs, so I’ve been able to expand to not just singing English songs, and also singing four-part and more difficult songs.”

“She doesn’t mess around!” Isabel declared. “She’s really focused, and she respects every single person’s opinion, so she’s really open to suggestions about how we should practice or how we can make practice better in terms of musicality, blending together, that kind of stuff.”

“She’s just so incredibly solid as a musician and as a person; you can always count on her,” Mr. Lien adds. “She has a real depth of musical sophistication and understanding.”

On top of excelling in Honors Chorale and Vocal Jazz, Jennifer has also become a shining star in De la Femme, CB’s female show choir that meets after school. Isabel, one of the co-directors of De la Femme, talks about what it’s like to have Jennifer in the group this year. 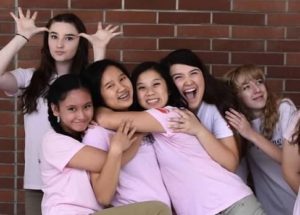 “It’s a confidence booster frankly because I already know she’s a strong singer from Honors Chorale and Vocal Jazz, so having her there is just like, ‘Wow, we have such an amazing person in De la Femme! We’re gonna have a great year.'”

“I really love De la Femme! Like, I didn’t think I would love it this much,” Jennifer laughs. “It’s kinda like a second family — or third, fourth, I don’t know, so many groups! Anyways, it’s like another family where I look forward to going to De la Femme. Even if I’m having a rough day, it’s like, ‘Well, at least I have De la Femme practice after school!'”

Even though she’s definitely a top student in every choir she’s in, Vocal Jazz is where Jennifer is her most impressive. Her unwavering work ethic, talent, and drive earned her the spot as lead singer after less than a year in the group.

“I joined [Vocal Jazz] sophomore year in September, and then I think at the end of sophomore year…Gaw called me [and said], ‘You’re not in trouble, I just wanted to ask you if you’d be willing to be lead of Vocal Jazz,’ and then she explained what that would entail and I was like, ‘Yeah sure, that sounds fun!'”

Gaw clarified what exactly a lead voice is and its function within the group, as well as the reasoning behind her choice of Jennifer.

“The lead voice is what we hear first, acoustically…she has to be more solid than anyone because if people are struggling to figure out balance and blend, they refer to her,” the instructor said. “Jennifer leads by example in singing and her preparedness…she’s just a good example of what a student should be: coming prepared, being quiet and attentive, and paying attention.”

She goes on to name a couple highlights of Jennifer’s behavior. 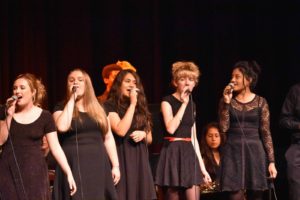 Isabel adds her own view to Jennifer’s role in Vocal Jazz.

“[Being in Vocal Jazz] opened my eyes to how much she actually does…She’s a great leader, and she knows her stuff. She’s always open to practice with other people even if they don’t sing the same part as she does, which I think is really cool about her.”

Committing to so many music groups — and the insane workload that accompanies them — definitely has drawbacks. For one thing, waking up at five in the morning. Working out schedules and carpools with her parents has been challenging at times, and Jennifer says it’s difficult to “[find] time to learn all the music along with all the other classes’ homework load.”

However, she has a great outlook on the situation.

“I see more advantages to it because yeah, the schedule’s busy and I miss out on some things, but in the end, I’m doing what I love to do.”

Although Jennifer has loved music from an early age, her experience in CB’s Vocal Jazz has been the most influential on her future plans. Having the opportunity to lead the group was the push that caused her to want to study music. After agreeing to the responsibility, she realized that she had to “step up and actually do this thing” but soon thought, “Oh, hey, I kinda wanna do this forever.” 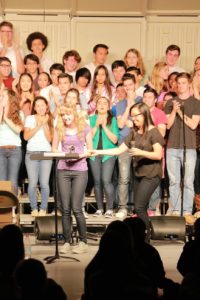 Jennifer won the award for Vocal Jazz Student of the Year two Hollywood Bowls in a row — and she still has another chance left!

Jennifer is confident in her college plans — more so than any other senior I’ve met!

“I plan on going to Sac State [or William Jessup] and studying for a BA in music, and hopefully joining their Jazz ensemble.”

Gaw, who also directs the Vocal Jazz group at Sac State, is excited at the prospect of having her lead student for another few years. Although Jennifer would have to audition with the other prospective freshmen, Gaw has been able to observe Jennifer’s numerous wonderful character traits over the past three years; watching such an incredible person grow and mature into a brilliant musician can only help Jennifer’s prospects.

“I think it’s gonna be great!” the Jazz teacher exclaims. “She could go anywhere and be successful.”

After graduating — at the top of her class, I’m sure — Jennifer has a couple of ideas for career paths.

Mr. Lien explains how Jennifer’s personality will be an asset in that career field.

“She displays a lot of patience and a calm acceptance of whatever the circumstances are. Music therapy [or] music education for these kinds of kids will be a great place for her. She makes people feel comfortable from the moment that she says hello.” 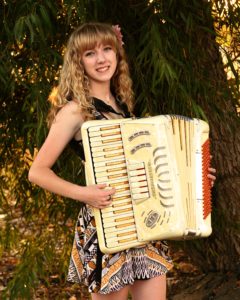 Jen poses with her golden accordion like the goddess she is

Amazingly enough, singing is only the tip of the iceberg with Jennifer. Although she’s quite the master pianist, Jennifer plays so many other instruments that she created a list.

“Let’s see… I play the piano and the keyboard, I have a thumb piano, the guitar — acoustic and electric, but I prefer acoustic — the ukulele, accordion, didgeridoo, djembe, I have a Cajón — like the drum box — and I also have a steel drum. And then other instruments that I have but I’m not super good at playing are like the bass, the trumpet, we have a shofar — I haven’t played it in a long time, but I have it! — and then a harmonica…I’m pretty sure we have a clarinet somewhere in my house.”

However, music is not her only forte. Jennifer also happens to be an extraordinary artist, as shown by the gallery of her artwork below. An avid animal lover, she has been certified in Pet First Aid by the American Red Cross and has adopted a burrowing owl in the Sacramento Zoo.

“She has even more sides to her than I thought [when we met],” Isabel mused. “She’s like, a saint. Quite literally a saint, like there’s no one I can think of that could beat her in terms of Christianity and faith and stuff. She has such a funny side once you get to know her; she’ll open up to you, like the hidden sass, the jokes! It’s amazing. She just always knows what to say, and she’s always there if I need someone to talk to or someone I can ask for help with music, or just like, life.”

“Jennifer has this hope for this world, for it to be a better place,” Gaw thoughtfully describes. “We get cynical and sarcastic. To get through life and to get through all the negativity, we make fun of it and we get sad sometimes and say things we shouldn’t say. But with her, she always sees the positive light in the world, which is really hard when you’re surrounded by very cynical people, especially in the music world. She just finds the light in everyone — without losing who she is.”

All in all, Jennifer Rustad is one of the most extraordinary, delightful, and admirable people I have ever had the pleasure of meeting. She will undoubtedly make an impact wherever life takes her next, just as she has made an impact in her time at CB.

Some of Jennifer’s artwork: 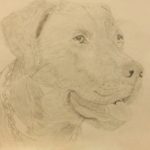 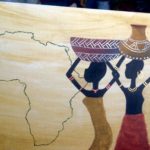 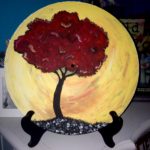 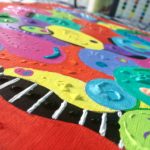 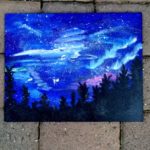 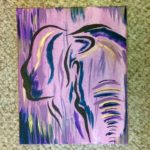 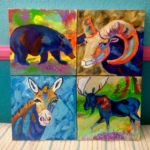 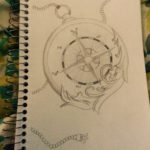 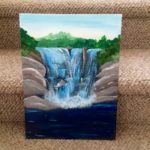 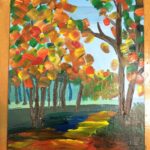 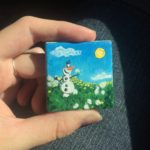